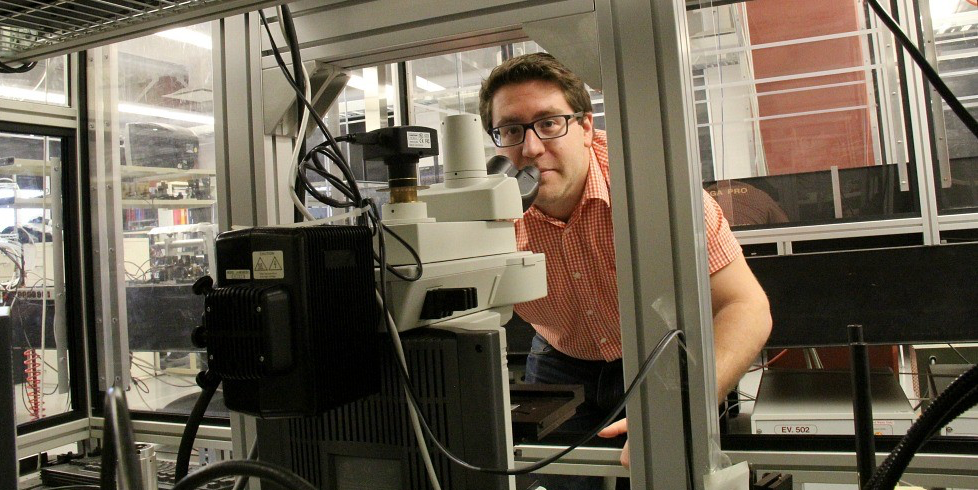 By OLGA IVANOVA and RICHARD CAIRNEY

A research team at the University of Alberta has developed a method of connecting neurons, using ultra-short laser pulses—a breakthrough technique that opens the door to new opportunities in medical research and treatment.

The team, based in the Faculty of Engineering, is the first ever to find a way to bond neurons. Neurons are cells in the nervous system that are responsible for transferring information between the brain and the rest of the body.

“The immediate application is for researchers. They finally have a new tool to do what they have not been able to do before,” said Nir Katchinskiy, a second-year PhD student in electrical engineering who led the study. The team’s findings are published in the flagship scientific journal Nature Scientific Reports.

Katchinskiy had a real-life application in mind when he started the project.

“I was really interested in the nervous system—if you have a severed nerve, you can’t repair it,” he said. “My thought was, what if we could ‘weld’ it back up right after it’s injured?”

In the study, two neurons, put in a special solution that prevents them from sticking together, were brought into contact with each other. Femtosecond laser pulses—each ultra-short pulse occurring every 10-15 seconds, or one-quadrillionth of a second—were delivered to the meeting point of the two cells. Although the outside layer of the cells was partially compromised, the inside of that protective layer remained intact. As a result, the two cells established solid bonds forming a common membrane at the targeted area.

Throughout multiple experiments, the cells remained viable and the connection strong. It took the neurons 15 milliseconds to stick to each other—a process that would have taken hours to occur naturally.

The biggest advantage of the discovery is that it gives researchers complete control over the cell connection process. “You can really plan any experiment. The idea is to show that you can use [the femtosecond laser] as a research tool to control what you are attaching,” said Katchinskiy.

So far, the team has applied this method to three types of cells, but the potential of the technique seems limitless. For this project, Katchinskiy and Elezzabi, who are in the Department of Electrical and Computer Engineering, teamed up with professor Roseline Godbout from the U of A’s Department of Oncology and Cross Cancer Institute and Helly Goez, a professor in the division of pediatric neurology in the Department of Pediatrics at the U of A Faculty of Medicine & Dentistry. Both are also co-authors of the paper.

“We have two of the biggest researchers on cancer working with us,” said Elezzabi. He notes that femtosecond lasers can prove efficient in prostate, brain and ocular cancer research and treatment. Another possible application is in post-cancer surgery treatment.

For Katchinskiy, the promise of the new technique is its own reward. “We’re engineers. We come up with tools that provide potential.”