Final-exam challenge pits students' robotic vehicles against one another in futuristic run-and-gun competition. 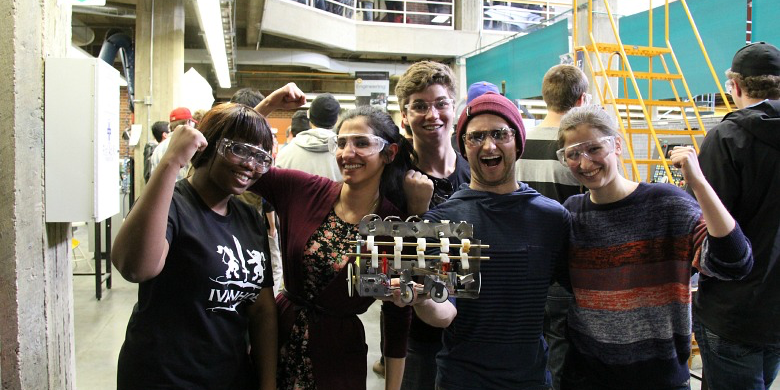 (From left) Mechanical engineering students Ebele Anekwe, Sarah Mattar, Brooks Atley, Ryan Musteca and Shealynn Carpenter strike a pose after putting their vehicle to the test in the robotic biathlon.

(Edmonton) Second-year engineering students put their creativity and design skills on display as part of a final exam that pitted their robotic vehicles against one another in a futuristic version of biathlon.

“This is absolutely next-level stuff,” said mechanical engineering student Sarah Mattar, explaining that the Mechanical Engineering 260 course was unlike any other. “When we first started planning and building, everything was going great—until that one day when you come into the shop and nothing’s working.”

Split into teams at the beginning of the winter term, each group was given the same package of materials and instructed to design and create a small remote-control vehicle that could manoeuvre around a track and fire five Ping-Pong balls at five targets in a space of two minutes.

Although the team hit rough patches, they found ways to solve design problems. But they admit the assignment was challenging and the task the machine was supposed to complete was complex: the vehicle needs to move into position quickly, fire at a target then reposition itself to fire on subsequent targets.

“It was the best course and the worst course you’ve ever taken, all at the same time,” joked team member Ebele Anekwe.

“For a while it seemed like there was always something wrong,” added teammate Shealynn Carpenter. “Some days we’d spend eight hours in the shop.”

“There was a solid week where we spent about six hours a day in the shop working on this,” said Ryan Musteca.

“To get together, we had to consider the schedules of everyone in the group, plus their class schedules and what was going on in other courses,” said Atley, who added that “the hands-on portion of this course shows what we’re doing.”

All of the students agreed that they’re good in math and science, but building something they’d designed, at this level, was a new experience. The vehicles, they said, are physical representations of the math and science work the teams performed.

Students in the course have the support and supervision of the technicians in the Department of Mechanical Engineering, who work to support teaching and research. As well as getting expert supervision, the students have access to state-of-the-art equipment, including 3-D printers.

Students are graded on how well their vehicle performs and on a report of the engineering design behind the vehicle.