Engineers ask the question: how did the plesiosaur swim? 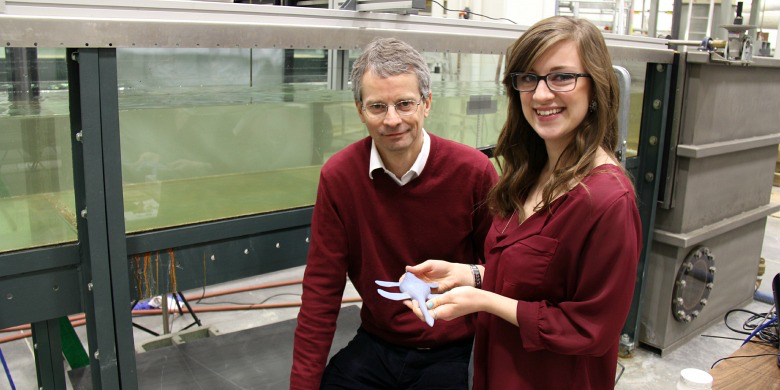 Civil engineering student Laurel Richards and professor Mark Loewen used a scale model of a plesiosaur in a water flume to explore how the ancient sea lizard swam.

(Edmonton) There are plenty of opportunities for undergraduate students to take part in leading-edge research at the University of Alberta. But when Laurel Richards heard about a chance to investigate how a giant ancient sea creature swam, she thought she’d hit the jackpot.

“I heard that Dr. Loewen had an interesting project and that it had to do with dinosaurs, and I was definitely interested,” said Richards, a fourth-year civil engineering student.

The project started when Donald Henderson, curator of dinosaurs at the Royal Tyrrell Museum, contacted civil engineering professor Mark Loewen looking for help understanding how the plesiosaur, an ancient lizard that lived more than 66 million years ago, was able to swim stably underwater.

Loewen, whose research focuses on water and ice, was immediately intrigued.

“He sent me this email and I got back to him right away,” Loewen said. “I said ‘Yeah—let’s do this!’”

Henderson’s email inquiry turned into a research subject for Richards. Henderson supplied Loewen and Richards with a one-tenth scale model of a plesiosaur to test Henderson’s theory that the lizard—plesiosaurs were actually lizards, not dinosaurs—needed a fin on the end of its tail to remain stable underwater.

”The stability of a swimming creature is an extremely complicated problem to solve,” said Loewen. “As a first step, we decided to conduct an experiment to determine if the rigid model remained in a stable position, facing upstream, when submerged in a turbulent flow.”

The experiments Richards conducted were sophisticated. She mounted the plesiosaur model so it could be submerged in an open channel flume in the Department of Civil and Environmental Engineering’s Hydraulics Lab. The flume is essentially an underwater version of a wind tunnel. Instead of exposing models to air flow, the flume exposes them to water flow.

The tests showed that the model plesiosaur was not stable when submerged in a turbulent flow, but in her research presentation, Richards said more investigation is required. A larger model or more sensitive load cell could be used to get accurate measurements of the destabilizing forces acting on the model plesiosaur. These test results could then be compared to measurements made using models that have tail fins, she said.

Richards’ research was conducted through the Dean’s Research Award program in the Faculty of Engineering. The program gives undergraduate students the opportunity to work on research projects with their professors and graduate students, giving them valuable exposure to research experience and enriching their educational experience.

Engineers ask the question: how did the plesiosaur swim?
Newsroom