Naga Siva Kumar Gunda thought he would become a professor, but with two companies underway, he’s taking a run at startup success. 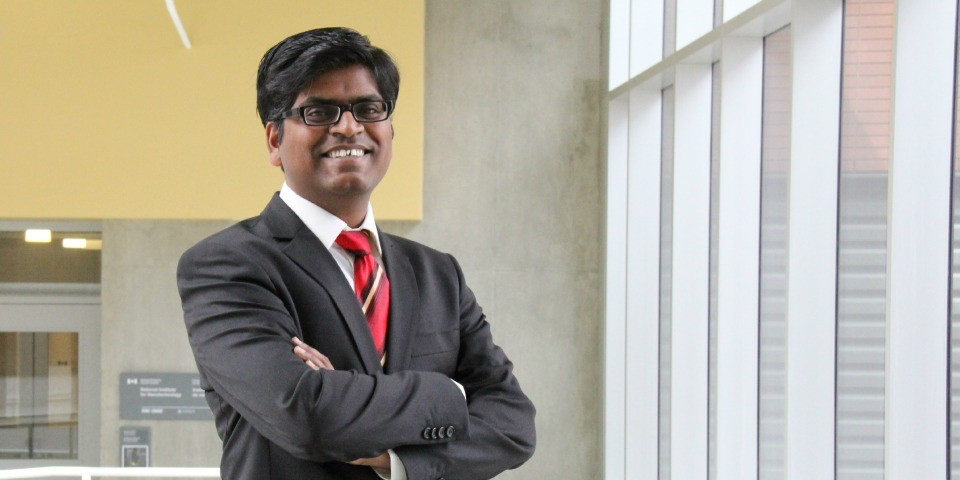 (Edmonton) He was a highly decorated student when he travelled to the University of Alberta from the Indian Institute of Technology Bombay in 2008, with hopes of becoming a professor. But now that he has completed his PhD, Naga Siva Kumar Gunda is feeling the entrepreneurial pull of technology commercialization.

Gunda celebrates with his fellow Faculty of Engineering graduates during 2014 convocation ceremonies June 5. With two companies underway and the possibility of developing a third, Gunda is taking a run at the private sector, for the time being.

“I’ve decided to take a risk and I’ll be working for my companies for the next couple of years,” he said. “I was hoping to become a professor but now I’m considering both (careers).”

So far, Gunda has been pretty successful in the startup community. Last year he and chemical and materials engineering PhD student Naresh Miriyala won $5,000 in the campus-based AVCatalyst pitch competition. That victory qualified them to compete for—and win—the $20,000 TEC Edmonton VenturePrize in the student category with their first company, MyoNexus Diagnostics.

The company focuses on lab-on-a-chip technology. Their Cardio Chip, developed by U of A mechanical engineering professor Sushanta Mitra and his team, helps individuals or health workers predict heart attacks with a quick, on-the-spot test capable of detecting increased levels of myoglobin in the bloodstream.

This year, Gunda and Miriyala joined forces with engineering alumnus Yashasvi Purwar and chemical and materials engineering master’s student Krishna Kishore Junga to form SmartCount Health, a company aimed at battling malaria. They’ve just won $7,500 as runners-up in the 2014 TEC Edmonton VenturePrize student category and $5,000 as runners-up in the AVCatalyst pitch competition. Working on technology developed by U of A chemical engineering professor Sirish Shah, the group is trying to commercialize a device that quickly tests patients for malaria and other diseases such as dengue, sickle-cell anemia and tuberculosis.

Finding support for commercialization endeavours speaks to the high quality of work Gunda performs and the research he has been involved in. He initially came to the U of A following his supervisor, mechanical engineering professor Sushanta Mitra, who joined the Department of Mechanical Engineering. Gunda also knew the U of A had strong nanotechnology facilities and expertise that he wanted to take advantage of.

Most recently, he and Mitra have developed and tested a sensor that quickly detects the presence of E.coli bacteria in potable water and is capable of sending out mass text-message alerts to warn people of the contamination. Mitra and his team are actively working with a number of partners in Canada, India and the United States for possible commercialization of their Mobile Water Kit technology in partnership with TEC Edmonton.

Gunda has had work published in 13 journals (including one featured article in Lab-on-a-Chip Journal), has presented more than 20 conference papers and has given eight poster presentations. Although he’s interested in commercializing the discoveries he and his colleagues have been a part of, Gunda says the basic science behind them is what counts.

“My interests are in micro- and nanotechnology and finding simple solutions to address problems that can be solved using these technologies, in the areas of health care and the environment. I’m exploring the fundamentals of science at the micro and nano scale and transferring that knowledge from basic science to practical applications. The cardio chip application is one such technology, which is based on microfluidic principles and whose main function is to predict potential heart attacks.”

Now working for the Micro & Nano-scale Transport Laboratory at the U of A as a post-doctoral fellow, Gunda says that having a broad range of projects and responsibilities while working on his PhD gave him a well-rounded education.

“I got an opportunity to refine my fundamental skills in engineering throughout my bachelor’s and master’s degrees. I wanted to apply these skills and increase my knowledge during my PhD at the University of Alberta, which has excellent infrastructure and resources. At the same time I wanted something more, and explored other possibilities in areas like entrepreneurship and product development from conceptualization to commercialization. My supervisor is working in different areas, ranging from energy and environment to biosystems. Such interdisciplinary research exposed me to different areas of science and engineering and gave me an opportunity to develop novel technologies and establish myself as a competent researcher in the scientific community.”