Chancellor emeritus and former board chair recognized with international and national awards for outstanding volunteer service. 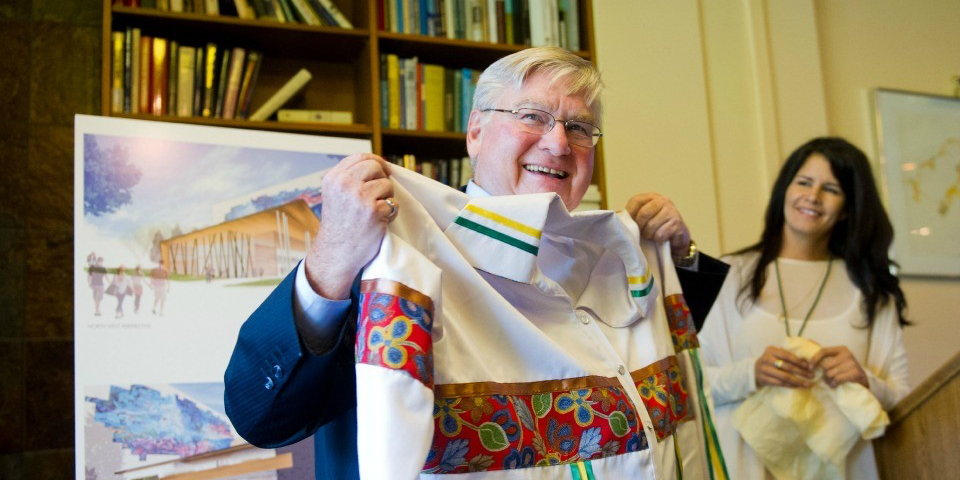 Eric Newell receives a ribbon shirt from Tracy Bear in 2012 in recognition of his work with Aboriginal groups. (Photo: Ian Jackson)

(Edmonton) When Eric Newell took over as CEO of Syncrude in 1989, he was faced with a world-changing opportunity and a province-sized problem.

Development of Alberta’s oilsands was still struggling to find its footing but, with the right investment, was on the verge of thrusting Alberta into the world’s energy spotlight.

A large part of that investment would come in the form of people. Unfortunately, shortages of professionals ranging from engineers and scientists to skilled tradespeople threatened to stop the oilsands in its tracks.

“We were looking to get oilsands going again and realized if we didn’t get more people pursuing all levels of education, we weren’t going to have the workforce we’d need to undertake this development; in fact, we could kiss oilsands development goodbye,” remembered Newell.

With that, Newell embarked on a mission of education that would rock every post-secondary school in the province—none more so than the University of Alberta.

“After awhile, we had so many partnerships with the University of Alberta, and not just in engineering technology, but a bunch of different areas,” said Newell of the numerous partnerships he helped forge with the U of A looking at all aspects of oilsands development, from extraction to remediation, and encompassing legal and even social ramifications. “I remember when we first ran into the problem of workplac­­e literacy. We knew how to make oil but we didn’t know what to do there, so we came to the U of A and that ended up in a very good workplace literacy program.”

That was the genesis of a passion for education that recently earned Newell the Distinguished Friend of Education award from the Council for Advancement and Support of Education (CASE). The award honours an individual whose volunteer service has helped to advance education at an educational institution—even though he or she is not a graduate of that institution.

Newell also received the 2014 Friend of Education award from the Canadian Council for the Advancement of Education (CCAE). The national honour recognizes his significant contributions to strengthening partnerships between education and business, and his commitment to corporate social responsibility.

As his partnerships with the U of A grew, so did Newell’s attachment to his adoptive school. Newell, who received his post-secondary education at the University of British Columbia, sat on the U of A Board of Governors from 1996–2002, the final four years of which he served as board chair. In 2003, Newell stepped down as CEO of Syncrude and in 2004 was installed as the university’s 18th chancellor.

As a university governor and in the role of chancellor, Newell became known for his ongoing efforts to strengthen partnerships between education and business, and for championing corporate social responsibility.

Upon leaving the role as chancellor, Newell kept on giving to the university. He and his wife Kathy donated $1 million to kick off the fundraising for an Aboriginal gathering place to be built on campus.

Now entrenched as a pillar at the U of A, Newell had only a brief retirement before university provost Carl Amrhein made him a special assistant to the provost and put him back to work.

“Eric is one of the very rare people who has a detailed understanding of both industry and the academy,” said Amrhein. “He has worked tirelessly to build bridges between post-secondary institutions and employers.  Eric is dedicated to helping young people, especially those with fewer family resources. He has championed career opportunities in many settings, and worked to create understanding within institutions to make changes in programs to better prepare learners for their careers.”

And though the university has become his home away from home, Newell’s passion for education knows no boundaries.

He founded a group called CAREERS: The Next Generation, a career-awareness program available in more than 550 high schools in Alberta that provides work experience for young people trying to find career pathways into everything from the skilled trades to health services.

Newell has also been active advocating for advancement and educational opportunities for Aboriginal youth. In 2012, he was the recipient of the Award for Excellence in Aboriginal Relations by the Canadian Council for Aboriginal Business and award sponsor Sodexo Canada, an award he accepted at the U of A. Newell has also received honorary degrees from the U of A, Athabasca University, UBC and the University of Lethbridge, as well as an honorary diploma from NAIT.

“The critical thing is, once you get the education of the youth up, education is a great equalizer of opportunity.”