Everything you need to know about weight training

Experts reveal how simple and effective a strength-training workout can be—and dispel some common myths. 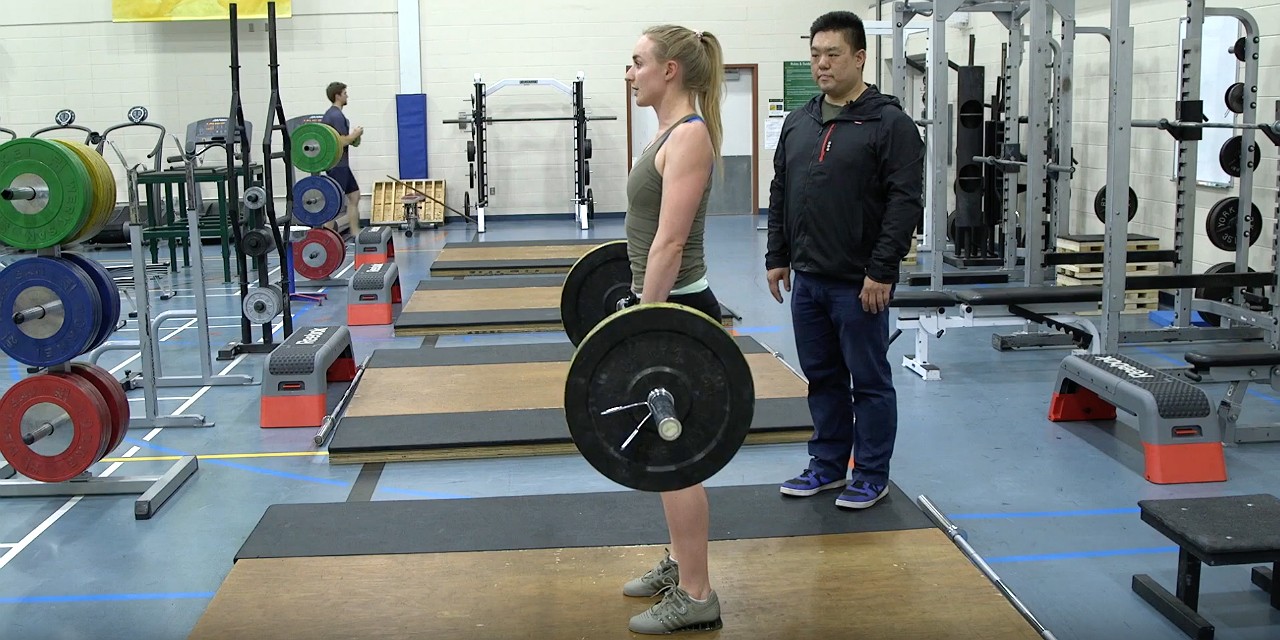 U of A muscle physiologist and Pandas volleyball strength coach Loren Chiu (right) looks on as student-athlete Mariah Walsh performs a set of deadlifts. "The goal should be to train as many muscles as possible with as few exercises as possible to keep the time in the gym to a minimum," says Chiu. (Photo: Daniil Anselmi)

Resistance training builds muscle size and endurance, strengthens bones, is a central piece in any weight management program and is quite simply one of the best known defences in warding off the unrelenting march of time.

And if the shoe and power drink ads are to be believed, it also looks like a lot of work.

“The fact of the matter is, resistance training doesn’t have to be fancy, you don’t need fancy equipment and you don’t need to do it in any fancy order,” said Timothy Caulfield, a University of Alberta health law professor and author of the bestselling book, The Cure for Everything.

“The research basically says you need to get in there, challenge the big muscle groups and get out.”

Caulfield and fellow U of A researcher Loren Chiu, who studies human movement and muscle function, say the research points to a surprisingly short list of exercises that build both muscle and strength while keeping gym time to a minimum.

Those exercises include lunges, squats, standing overhead presses or bench presses, and then chin-ups—or if you can’t string a couple of chin-ups together, pull-downs or seated rows.

“With these four exercises, you are basically training everything in the body,” said Chiu, a researcher in the Faculty of Kinesiology, Sport, and Recreation.

Caulfield has a similar list of exercises, but suggests deadlifts might be incorporated into the workout in time and under the watchful eye of a professional to ensure proper execution.

“If you were only allowed to do one exercise, the deadlift is it,” he said. “It has a nice range of motion and is a daily living kind of exercise that strengthens your back, your arms, your legs and your butt.”

As for number of sets, traditional weight room lore has the number of sets pegged at three, which Chiu says is probably a good starting point.

“There is no magic number for the number of sets—the research says anywhere between one and five—so we settle in the middle.”

He explained that subjects who embark on an intensive three-month training period for a research study might add two or three pounds of muscle. If they were to sustain that training for another three months, they might add another pound or two. After that, gains would require both a dietary and intensity boost.

“For the average person, two or three pounds of muscle is hardly anything. And they might lose two or three or pounds of fat, so they probably won’t see much difference in what they weigh, although they may see a change in how their body is shaped.”

Myth: Men are sensible in the weight room

This really isn’t a myth: no one thinks for a second that men are sensible when it comes to weight training.

“A lot of people, especially men, say they should be lifting heavy weight and get too focused on weight,” said Chiu. “They end up doing the exercise wrong or they end up putting themselves in a position where they are going to get hurt.”

What happens when weight trainers covet function over form is, according to Chiu, they can end up moving the stress off the muscles and onto the joints.

“There is a sweet spot where you challenge yourself and use heavy weights, without damaging the connective tissue.”

According to Chiu, sit-ups have had a bad rap in the last 30 years.

“When done properly, sit-ups can be a very good exercise. They’re not only good for abs, but they are also great for strengthening other trunk muscles.”

Unfortunately, Chiu said, people do way too many of them.

“If you can do 100 sit-ups properly, you’re not getting any benefit anymore. It’s better to do less by making the sit-up harder by increasing resistance or altering body position.”

Myth: Core exercises are the future

Chiu said core exercises, which originated in physiotherapy offices, can be very beneficial for certain patients, especially those dealing with back pain or coming off surgery.

But for otherwise healthy individuals, he said they are too easy to do, and the time would be better spent elsewhere.

“Standing exercises such as a squat, a deadlift or an overhead press make use of your core muscles and take out the need for these core-specific exercises.”

Caulfield said a lot of people have bought into the belief of spot reduction, or the idea that you can slim down by doing sit-ups.

“That is one of the most persistent fitness myths: the idea that you can reduce fat or tone a particular part of the body by working that part of your body,” he said. “But you just can’t—it’s physiologically impossible.”

Myth: Stretching is an integral part of staying fit

“I haven’t stretched in a decade,” said Caulfield. “If you are doing things like deadlifts or squats and you’re doing them right, you are getting that functional mobility you’re going to need.”

Beyond functionality found in the exercises themselves, Caulfield said the research clearly demonstrates that stretching can weaken muscles, hurt athletic performance and even lead to injury.

“If you’re a gymnast, you’re going to need it, but for most of us, it is not the best use of your time.”

The first attempt at pinning down the optimal number of sets came about in the 1940s as the U.S. military developed a training regimen for injured soldiers that called for 10 sets of 10 repetitions.

“They found it was a lot of exercise and they didn’t need it,” said Chiu.

That number was then reduced to three sets of 10 repetitions, with the first two sets acting as a warm-up.

“What we see is stronger individuals do less sets of exercise and do more by doing more weight.”

Fewer sets and more weight also means fewer repetitions. In training the U of A Pandas volleyball team, Chiu generally sets the limit at five or six repetitions per set.

The final piece of good news is you don’t have to live at the gym.

Chiu says people looking to reap the benefits of resistance training need only show up twice a week, although three would be optimal.

“You see diminishing returns for people who resistance train more than three days a week. For someone who is time challenged, two days a week is more than sufficient.”

Chiu says if you are only going twice, stick to the same four to six exercises, whereas a routine of three days a week may require a little variety.

“From a physiological perspective, when you start switching out exercises, you won’t be pushing your body as hard as you need to be making progress because you have to learn the exercise.”

With four exercises, a minute or so of rest between sets and a few minutes of cardio to warm up, Chiu says the workout shouldn’t take more than 45 minutes.

“The goal should be to train as many muscles as possible with as few exercises as possible to keep the time in the gym to a minimum.”

Everything you need to know about weight training