Examining the connection between infant gut bacteria and food allergies 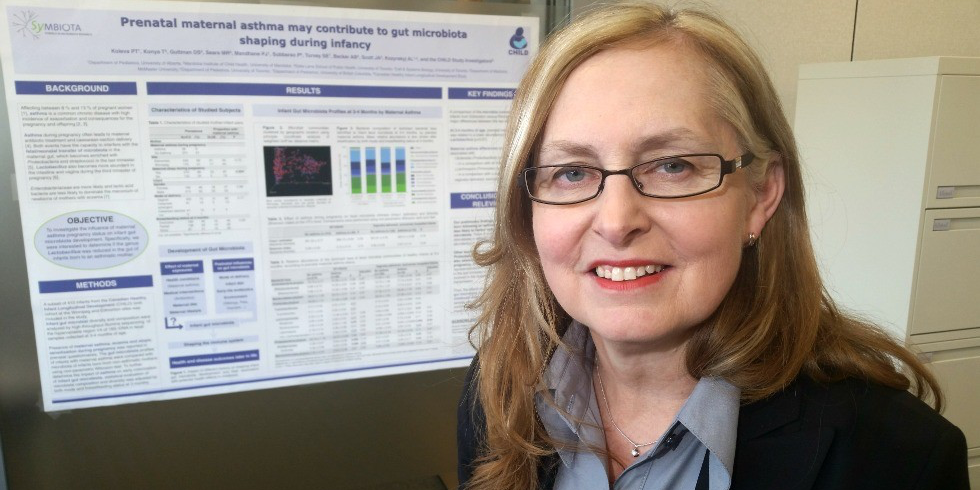 Pediatrics professor Anita Kozyrskyj is senior author of a study that looked at possible links between children's gut bacteria and their likelihood of developing food allergies.

(Edmonton) A new study from researchers at the University of Alberta and University of Manitoba is shedding new light on changes in intestinal bacteria of infants that can predict future development of food allergies or asthma.

The research, published in the February edition of the journal Clinical & Experimental Allergy and highlighted as the publication’s “editor’s choice,” reveals that infants with a fewer number of different bacteria in their gut at three months of age are more likely to become sensitized to foods such as milk, egg or peanut by the time they are one year old. Infants who developed food sensitization also had altered levels of two specific types of bacteria, Enterobacteriaceae and Bacteroidaceae, compared with infants who didn’t.

“Using DNA techniques to classify bacteria in the Scott and Guttman laboratories at the University of Toronto, we obtained information on the different types of ‘good’ bacteria present in infant stool collected at three months of age and then at one year of age,” said Anita Kozyrskyj, professor in the Department of Pediatrics at the U of A and senior author of the study. “We were able to then see which bacteria present at three months predicted the development of food sensitization at one year, as measured by a skin reaction test to the food.”

“We are continuing to study this process,” said Meghan Azad, assistant professor in the Department of Pediatrics & Child Health at the University of Manitoba and lead author of the study. “Ultimately, we hope to develop new ways of preventing or treating allergies, possibly by modifying the gut microbiota.”

The study, funded by the Canadian Institutes of Health Research and AllerGen NCE, looked at data from 166 infants enrolled in the Canadian Healthy Infant Longitudinal Development (CHILD) Study. This landmark study involves more than 3,500 families and their newborn infants across Canada, including 1,000 in Manitoba and 750 in Edmonton, who are being closely monitored to determine the genetic and home environment factors that contribute to future allergies and asthma.

Researchers say the data on gut bacterial patterns during infancy can serve as a biomarker for future disease.

“It is something that one can measure that indicates increased risk of food sensitization by one year of age,” says Kozyrskyj.

Both Kozyrskyj and Azad, who is also a research scientist at the Children’s Hospital Research Institute of Manitoba, caution that the results don’t necessarily mean the children will progress to full-blown food allergies in later life. The researchers will soon be expanding their sample size as data come in from other children at CHILD Study sites in Edmonton, Winnipeg, Vancouver and Toronto. The hope is to eventually have data from as many as 2,500 children from across Canada. The researchers plan to follow them as they grow, examining results again at the ages of three and five.

“At the end of the day, we want to know if infants who show changes to normal gut bacteria composition will go on to develop food or other allergies, or even asthma,” says Kozyrskyj.