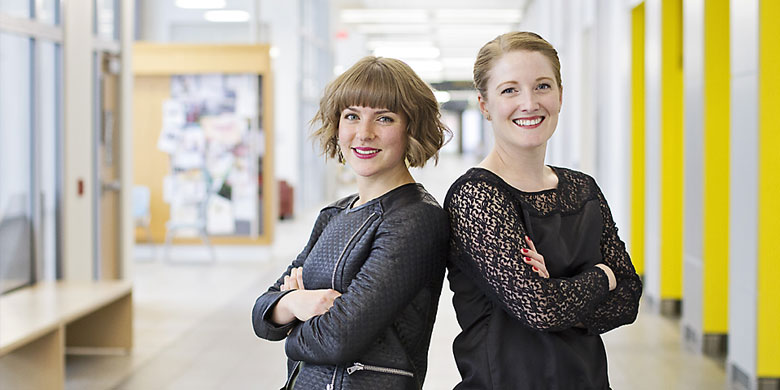 (Edmonton) The University of Alberta’s most prestigious graduate scholarship was recently awarded to two School of Public Health students, Janis Geary and Elaine Hyshka. Geary and Hyshka are two of 15 doctoral students awarded the Izaak Walton Killam Memorial Scholarship in 2014.

According to the terms of the gift made to the university by Dorothy Killam, the award is given to individuals of sound character who are likely to contribute to the advancement of learning or to win distinction in their profession.

“Commons” generally refer to resources that are used collectively in a community. By extension, a “research commons” involves sharing data and resources to support research.

There is an argument that research data should be publicly accessible for scientists to use. After all, this should result in greater benefits, such as lower costs for researchers, funders, governments and the public. But according to Geary, it’s not that straightforward, especially when it comes to sharing research involving genetic materials.

In this case, the resources—genetic materials—are vulnerable to social dilemmas, explains Geary. Some parties put resources such as genetic materials into the commons, whereas others may only access the data and resources for research purposes. Issues may arise if people are reluctant to contribute to a commons they can’t use, and which might be exploited.

As research becomes increasingly collaborative and global, partnerships are the centrepiece for sharing resources when it comes to genetic materials. “The issue is that research commons aren’t necessarily uniformly good for all,” notes Geary. The question at the core of Geary’s research is how to fairly manage these resources.

Using the International Barcode of Life project as a case study, Geary is interviewing researchers around the world to find out how they participate in research commons, or why they don’t. In addition to identifying barriers, she wants to discover best practices for promoting participation.

“By identifying the interests and hearing the concerns of various groups,” says Geary, “I am working to ensure it is fair for all.”

Geary’s approach to exploring research commons is innovative and theoretically complex, with the potential for broad implications. “I hope that the recommendations from my research are useful to the International Barcode of Life project, and that they provide helpful solutions.”

She expects that the outcomes will also be useful to others trying to set up research commons. “They will inform broader discussions about how to have fair access to knowledge.”

Geary is very appreciative of funding opportunities such as the Izaak Walton Killam Memorial Scholarship. As a PhD student, having funding has meant the difference between simply meeting the requirements of her doctoral program and becoming an independent scholar.

“I’ve had the time to learn from several disciplines, which allowed me to approach studying research commons in a new way. It has been a great privilege to receive funding that gives me the freedom to work in this way and fully explore ideas.”

This research is funded through scholarships awarded to Geary, and through funds provided by Genome Canada and other groups to the International Barcode of Life Project.

It was while taking a political sociology course as an undergraduate student that Hyshka first became interested in illicit drug policy. Her initial curiosity has developed into a full-blown passion and positioned her as an emerging expert in the area of problematic substance use and harm reduction.

According to Hyshka, as many as 1.4 million Canadians face substance use disorders. Yet there is a vast unmet need for treatment services in Edmonton and elsewhere. “Research shows that the majority of these individuals are not able or not ready to access treatment programs,” she says. “There is a lot of room for improvement.”

Hyshka explains that harm reduction helps people connect to treatment and focuses on keeping people as safe and healthy as possible. “My desire is to keep people healthy and keep them alive. You can’t recover from a substance use disorder if you’ve died of an overdose.”

Harm reduction offers services and social support without passing judgment or requiring individuals to stop using drugs. This approach can lead to trusting relationships in which people can be encouraged to make positive changes in their lives. “It tends to produce better health outcomes."

“My belief is that we should respect the rights and dignity of all people, including those who use illicit drugs.”

Hyshka’s research is focused on socially vulnerable people—for example, those who are homeless or living in poverty—who are experiencing substance use disorders. Through interviews with more than 300 inner-city individuals, she will assess the need for harm reduction and substance use services, the extent to which these services are being accessed and the barriers people face in getting help.

In this study, the largest ever of illicit drug users in Edmonton, Hyshka is working with a coalition of community partners including Streetworks, HIV Edmonton and the Boyle McCauley Health Centre. The research, funded by the Office of the Chief Medical Officer of Health for Alberta, aims to create the scientific evidence needed to influence and improve policy decision-making. “We need to make positive, evidence-based change to health systems,” she explains.

“My commitment to community-engaged scholarship is rooted in a strong belief that academic research should not only advance learning, but also address important health and social challenges facing communities,” says Hyshka, who also received the Dorothy J. Killam Memorial Graduate Prize as the top-ranked candidate.

“The generous support of awards like the Izaak Walton Killam Memorial Scholarship has enabled me to focus on my research and dedicate the time required to develop mutually beneficial community partnerships that uplift both students and the whole people.”