Exercising during pregnancy cuts odds of complications by a quarter

Updated Canadian guidelines for physical activity during pregnancy call for pregnant women without medical restrictions to get 150 minutes of exercise per week. 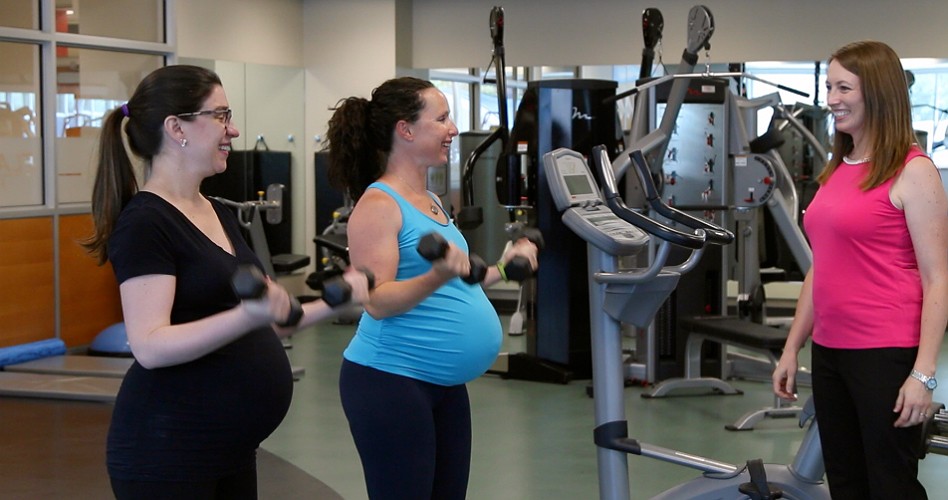 Cardiovascular health researcher Margie Davenport (right) led a study showing exercise during pregnancy reduces the risk of illnesses like depression by 25 per cent and cuts the risk of major complications like pre-eclampsia and gestational diabetes by 40 per cent. (Photo: Faculty of Kinesiology, Sport, and Recreation)

Women who exercise throughout pregnancy can cut the odds of developing a major complication by at least a quarter, according to new University of Alberta-led research.

The finding is one of many that helped inform the creation of the joint Society of Obstetricians and Gynaecologists of Canada/Canadian Society of Exercise Physiology 2019 Canadian Guideline for Physical Activity Throughout Pregnancy, the first evidence-based recommendations on physical activity specifically designed to promote fetal and maternal health.

“These guidelines are going to change practice,” said Margie Davenport, a cardiovascular health researcher in the Faculty of Kinesiology, Sport, and Recreation. “The health-care providers I’ve spoken to are pretty excited about it.”

The overarching recommendation in the guidelines is that all women—with the exception of those who shouldn’t exercise during pregnancy for medical reasons—should be physically active throughout their pregnancy.

Davenport said the threshold for physical activity was set at 150 minutes of moderately intense exercise each week, spread over at least three days in a week, if not seven. Some of the activities sanctioned include walking, swimming and stationary cycling. Resistance training is also recommended.

Besides reducing the odds of developing pre-eclampsia, gestational hypertension or gestational diabetes—three complications that are extremely common during pregnancy—the study clearly showed that being active to the recommended level did not increase the risk of having a miscarriage, a preterm birth or a low-birth-weight baby.

“These are typically reasons a pregnant woman would be less inclined to exercise,” said Davenport.

Davenport noted the study wasn’t able to identify an upper threshold where exercise might not be beneficial any longer. And when it comes to a minimum level of exercise, Davenport said any physical fitness is better than nothing.

“For women who are not able to achieve these guidelines, even being physically active at a level below these guidelines can result in some benefits or improvements in your health,” she said.

Davenport’s team found a U.S. study showing that only 15 per cent of pregnant women meet the current guidelines for exercise during pregnancy. She suggested that might be a result of a history of women being directed to rest and relax.

“We know that physical activity during pregnancy can help improve moods; we saw a substantial reduction in depressive symptoms, and we saw health benefits for the baby as well.”

She said there are medical reasons women should not be active during their pregnancy, including having a ruptured membrane, persistent vaginal bleeding, a growth-restricted pregnancy, premature labour, pre-eclampsia and uncontrolled thyroid disease.

“These women are not to engage in more strenuous activity when these conditions develop, but the guidelines encourage them to continue their daily activities as directed by their doctor,” she said.

What the study didn’t reveal is why exercise is so important in reducing pregnancy complications for both mother and child. Davenport speculated this need for activity evolved from a time when we were a highly active society.

“While working on a farm, for instance, the idea of reducing activity and resting more was likely beneficial. Today's society is much less active. Reducing activity levels further may not be helpful,” she said.

She added the work being done in her lab is starting to uncover the mechanisms underlying the benefits of physical activity and pregnancy.

“From a metabolic standpoint, the muscular contractions during exercise help to normalize blood sugars. Normalizing blood sugars can help to prevent gestational diabetes and reduce the amount of blood sugar going to the baby, which reduces the likelihood of a large baby,” said Davenport.

She noted exercise during pregnancy can improve the function of blood vessels in the body, which may help reduce the risk of gestational hypertension and pre-eclampsia.

“And on top of that, we know that women who exercise have reduced odds of having excessive gestational weight gain, which is associated with an increased risk of pregnancy complications,” she said, adding the majority of women exceed current recommendations for weight gain during pregnancy.

The Society of Obstetricians and Gynaecologists of Canada and the Canadian Society of Exercise Physiology developed the original guidelines in 2003. Though the original report also called for moderate physical activity during pregnancy, it was based mainly on expert opinion because there was minimal evidence available at that time.

“In the subsequent 15 years, there has been an explosion of information and literature about exercise during pregnancy, so it was time to do an update,” said Davenport.

As chair of the guidelines consensus panel and the guidelines steering committee, Davenport helped gather a pan-Canadian group of researchers, clinicians and stakeholder groups to examine the research and create the guidelines.

From there, the researchers undertook 12 systematic reviews—11 at the U of A and one at Western University—that covered a wide range of maternal and fetal health outcomes related to exercise and pregnancy to develop the guidelines.

“There are going to be times during pregnancy when women are feeling either nausea or fatigue. We recommend, on those days, to listen to your body, and return to the recommendations as soon as possible,” said Davenport.

“Even some exercise is better than none.”

Exercising during pregnancy cuts odds of complications by a quarter