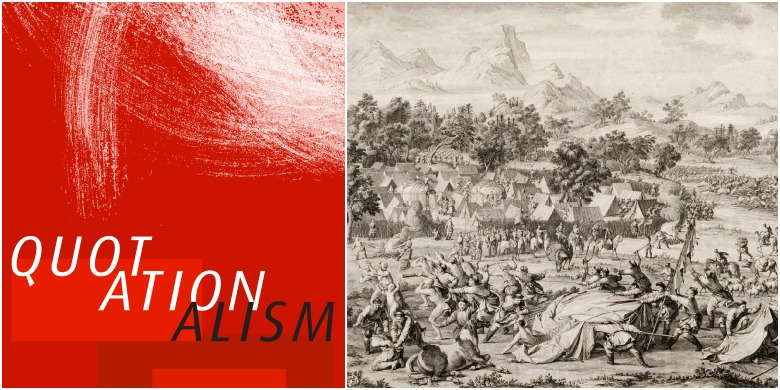 120710-quotationalism-banner
(Right) Detail from one of 16 prints commissioned by the Qianlong Emperor, depicting the Qing state's military victories on China's northwest frontier. The prints are based on ideas and sketches by European Jesuits who had seen the works of Georg Philip Rugendas, a German painter.

(Edmonton) There’s a painter in a small town in the south of China whose daily job is looking at a copy of Vincent Van Gogh’s infamous Sunflowers and painting it over and again. He’s not the only one; there are several of them. They also spend quite a bit of time on the Internet.

They’re not artists in the exact sense of the word, but the pieces they create hang on the walls of homes in the West. They continue a tradition in China that dates back centuries—a practice that raises troubling questions in the Western Hemisphere.

Some of those queries are the focus of two shows running concurrently at the University of Alberta. Quotationalism and China’s Imperial Modern: The Painter’s Craft challenge established notions of originality, authenticity and cultural values. And at least one of the shows is unusual, because it’s not common that a gallery would invite fake art pieces for an exhibition.

But that’s the idea behind Quotationalism, for which students were given the permission to fill their blank canvases by copying other artists. Some of the more than 20 pieces students created for the show, at the FAB Gallery until July 14, are copies of artworks by Chinese artists dating as far back as the 16th century.

The students’ works mimic those in China’s Imperial Modern, which includes a selection of art pieces from the university’s Mactaggart Art Collection—which are themselves copies of works by earlier artists.

Lisa Claypool, who is co-curating the Quotationalism exhibit with fine arts professor Maria Whiteman, says we’re bombarded with copies in culture, yet, especially in the Western Hemisphere, we hold on strongly to notions of originality in arts.

Art and the copy culture

“Copying is a defining feature of our postmodern life,” she says. “What does it tell us about ourselves, that we’re a copy culture? That’s the question that both of these shows raise. The notion of originality in art has been questioned before, but it’s being done fairly intensely in these shows.”

She says in South China, there is a town called Dafen that is a major workshop for reproductions of famous European masterpieces. “They’re making exact copies by painting them and mass-producing these works. They’re making these reproductions that are then sold through the Internet to people around the world. So, for example, one artist might do Van Gogh’s Sunflowers and that’s all he does,” she says.

Claypool says the China’s Imperial Modern show, which also runs until July 14 in Gallery A at the Telus Centre for Professional Development, is also about quotationalism in China during the 16th and 19th centuries.

“So 400 to 700 years ago, what does copying look like in that culture? And how, if we look at it in China—let’s say in Shanghai in the late 19th century—what can we learn from that?” she says.

Claypool says the cultural attitude about copying in China are “much more fluid than it is here, where we think of the practice in a negative way, in terms of fakes and works that are not original or authentic. We’re still committed to a notion of originality; as a culture we’re deeply committed to that. But I also think that people copy as a way of questioning what originality actually means.”

Despite uncertainties about originality and authenticity in art, Claypool says, there are benefits in the art of copying. “Cultures are coming closer through the copy. China is a lot less distant to us now than it was perhaps a hundred years ago, and that’s partly because the copy is facilitating different kinds of cultural interactions.”

Claypool, a professor in the U of A’s Department of Art and Design, says such an exhibition would have been difficult to hold elsewhere because of its content. “No museum will say, we’re going to do a show on copies, because the expectation would be, we will show you a bunch of fakes, these aren’t genuine works, and somehow they’re lacking in originality,” she says. “That’s the good thing about working in an academic museum—you can raise these kinds of very troubling questions.”

FAB Gallery manager Blair Brennan agrees that the exhibitions provide an unusual chance to showcase students’ works. “It’s not usual that the gallery will showcase works such as these, some of which are direct copies of other artworks. It shows our commitment to providing innovative education for students,” Brennan says. “This is the first time that we’ve engaged students to question notions of originality in these shows.”

Claypool says it’s also a chance to present a different view of the culture on the other side of the planet.

“I hope through these shows, people can understand the relevance of that culture and not see it as foreign and exotic. There’s a relevance of what’s happening in China to how we understand our own culture today.”