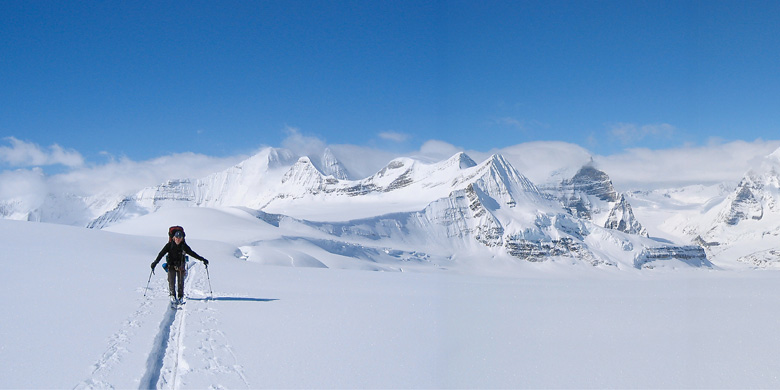 (Edmonton) Some of the world’s leading alpine researchers from the arts, sciences and humanities will set up base camp at the University of Alberta next week to discuss the many uphill challenges facing the planet’s mountain regions.

Hosted by the U of A’s Canadian Mountain Studies Initiative, Thinking Mountains runs Dec. 11 to 14 and represents a first-of-its kind effort to gather experts from a range of disciplines for collective conversations about the state of mountain regions. The issues are as large and imposing as the peaks themselves—with adaptation to climate change standing tallest.

“Like the polar regions, these areas are feeling the effects of a warming climate faster than other environments on the planet,” said Zac Robinson, one of the lead organizers and an alpine historian at the U of A.

Given that mountain regions provide one-third of the world’s population with water, how these environments react and adapt to climate change is a major issue, he added. “They’re incredibly important places.”

Robert Bateman to give public keynote

Thinking Mountains coincides with both with the one-year anniversary of the creation of the Canadian Mountain Studies Initiative and 10 years after the International Year of Mountains (IYM).

U of A biologist David Hik said the decade since IYM led to increased focus globally on mountain issues such as water and energy cycles and their relationship to climate systems to glacial melting to ecological changes at high altitudes. Closer to home, we’re seeing the consequences of climate warming and human activities in mountain areas, he said, from disappearing caribou herds in mountain parks to widespread infestations of forest insects.

Recent intense wildfires in mountain parks are another signal of human influence from previous fire suppression programs, he added.

“Instead of having a mosaic of tree stand ages, these mature forests have lots of woody material on the ground, so when fires occur, they are often much more severe than they have been historically.”

The four-day conference will feature sessions focusing on issues such as retreating glaciers, mountains as tourist landscapes and alpine history. There will also be one of the largest historical exhibitions of mountain photographs and a special screening of the Banff Mountain Film Festival World Tour.

Dianne Chisholm, an English professor at the U of A, will sit on a panel discussing Canadian women in climbing and mountaineering and issues they’ve experienced, including sexism and racism. An avid high-altitude mountaineer, Chisholm says mountaineering clubs have come a long way since the 1970s when women were subject to barriers—and sometimes harassment—from male climbers during expeditions.

“This will be like returning to the mountains, because I either know them or know of them,” Chisholm says. “These are very different people, and they’re all very passionate about the mountains and what they do, including myself. It will be really dynamic.”

Chisholm says Thinking Mountains will showcase the U of A’s talent in interdisciplinary mountain research, and ultimately could be a stepping stone to creating a formal mountain institute on campus.

“We want to show the university public that there is this field of study, and we could be a world leader in that field.”

Buy tickets to An Evening with Robert Bateman