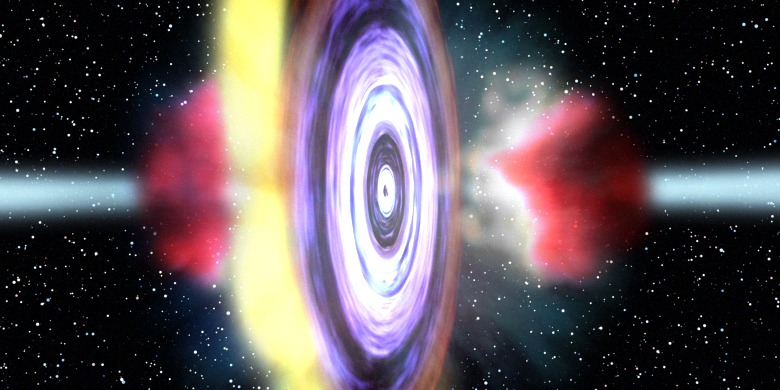 (Edmonton) Forget the Big Bang theory on the origins of the universe. University of Alberta physicist Greg Sivakoff is looking to find the secrets of the Big Burp theory.

Using land-based observation stations and the RXTE satellite (which specializes in observing high-energy events), Sivakoff and a team of researchers were able to predict a black hole’s giant plasma belch to within a day of the event. The belch is actually a bipolar jet of plasma (ionized gas) that discharges particles from the centre of an accretion disc (a structure that moves material toward its centre – in this case, the black hole). This galactic belch ejects particles, scattering them amongst stars and planets, and may also affect magnetic fields in the galaxy.

Sivakoff says that by exploring their sample black hole, H1743-322, he and his team hope to explain why the black hole launches gas jets and explain their relation to the accretion discs. They hope to clarify some of the jets’ effects on the formation and development of the galaxies in our universe. This particular black hole is optimal for study because it launches gas jets about every eight months. Understanding this object’s digestive troubles may help answer questions about these incidents.

“We understand that these black holes are ‘burping’ this material out,” Sivakoff says. “We want to understand how it’s related to their meal and what they’re eating, and to understand what the effects of this ‘burp’ are on the environment around them.”

The stellar mass that roared

To understand the magnitude of the event, Sivakoff notes that the jet is travelling at one-quarter the speed of light, which would be equivalent to a half-hour trip from the Earth to the sun. With the distance that these bursts can reach, it’s a good thing that this one is approximately 28,000 light years from us. Also noteworthy is the amount of energy that this galactic case of indigestion produces. “In one hour, stellar-mass black holes like H1743 can produce as much energy as the sun produces in five years,” Sivakoff says. “But this is miniscule compared to what goes on at the center of galaxies, where some behemoth black holes that are millions to billions of times more massive are also launching jets. Hopefully stellar-mass black holes like H1743 will act as Rosetta stones, helping us understand these behemoths that may help shape galaxies.”

The black hole’s meal is preceded by a burst of X-ray energy that emanates from the disc and lasts through the entire serving. This burst, while not evident to the naked eye, is easily captured by satellite RXTE. The team’s research found a pulsation in the X-ray light, as if the disc were humming a note. An instability in the disc leads to it dumping material – the meal – into the black hole. That material moves inward and orbits the black hole faster, which Sivakoff says is the likely cause of an increasingly higher-pitched tone that his team could hear coming from the disc in the days leading up to the hole launching its plasma jet. Once the jet had ejected, the pulse fell silent.

“This material is moving around the disc, which is causing that periodic signal,” he says. “Something is likely happening in the magnetic fields as it moves. That leads to the jet launch and seemingly leads to the disappearance of this sound’s oscillation.”

Sivakoff says that how plasma jets are launched remains a mystery, so tying the oscillations with the launch would be a big clue toward understanding the phenomenon. “It’s beginning to look like these things are very closely connected,” he says, adding that his team’s recent prediction is the most accurate determination yet of when jet ejecta would be launched from a stellar-mass black hole.