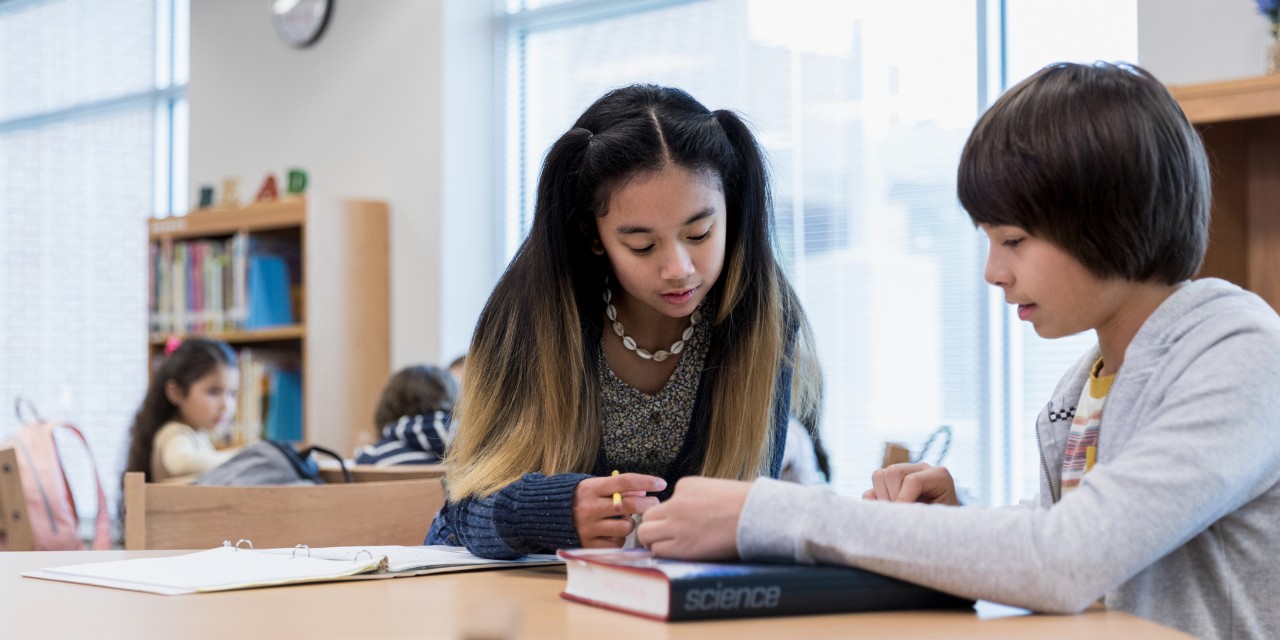 Many English language learners in junior high are falling behind their monolingual classmates in oral language and literacy skills, according to a recent study by a U of A linguist. (Photo: Getty Images)

A sizable proportion of junior high school students whose first language is not English are falling behind in oral language and literacy skills, according to a recent U of A linguistics study.

After testing 227 Edmonton and Vancouver English language learners in grades 7 to 9, Johanne Paradis and her colleagues found that many performed below their monolingual classmates for vocabulary size, understanding of word meanings, grammar and reading comprehension.

“We definitely found that there are English-as-a-second-language students in need at a very crucial time in their academic development,” said Paradis, pointing out that 25 to 35 per cent of K-12 students in Vancouver and Edmonton are English language learners.

While some English language learners perform very well,she said, support for those who don’t is critical.

“They are facing the pressures of learning the curriculum with limited language and literacy skills, (which could) hinder their further academic growth.”

Immigrant children who arrived late to the school system, most in the middle of elementary school, fared worse than those who had been in Canadian schools since kindergarten, she said, often performing below the lowest acceptable standard for their age on all tests.

Seventy-one per cent of late arrivals scored below the lowest score a student can get and still be within the normal range of monolingual performance for grammar, 54 per cent in vocabulary size, 42 per cent in word meanings and 25 per cent in reading comprehension.

But even some of those who started school early were falling behind, she said. While the majority performed close to their monolingual peers, “not all had caught up with respect to language and literacy skills even after seven years or more of schooling in English in Canada.”

“The common wisdom is that kids are like sponges, soaking up language like water, but that isn't what any of the research shows,” Paradis noted.

“The biggest growth in learning English is in the first seven years, but after that some English language learners do not improve with respect to how they compare to monolinguals ... the growth has slowed down. That's what worries me—the ones who are stuck at the bottom in middle school. There's nothing in our data that makes us confident they won't be there forever,” she said.

Students in the study were also interviewed about which language they use with family and friends, and how often they engage in various activities in each language. Parents completed a questionnaire to gauge parental education.

To improve literacy skills among English language learners, Paradis suggested reading in English outside of class as much as possible, including books and magazine articles in either electronic or print form. Those who do showed stronger reading scores, she said.

However, focusing exclusively on reading may not be enough to adequately improve literacy, she added.

“Developing oral language skills, such as vocabulary or grammar, would be beneficial not only to develop these skills in particular, but also because they promote reading skills.

“Skipping oral language training … may not achieve the desired result, because oral skills provide the foundation for reading.”

Time spent listening to English on TV or through music instead of text-based activities had a negative impact on reading comprehension, she said. And speaking English with parents at home seemed to make little difference.

“We always see a more positive effect for speaking English among siblings and friends, but in many ways that's a good news story, because we don't want to discourage families from using their native language at home,” where it is important for maintaining family and cultural ties.

Identifying students who need English language support in middle school is crucial, said Paradis, as the number of culturally and linguistically diverse students in Canadian schools is increasing every day.

“They receive support for a certain number of years, but after that, they're kind of cut off” in the current school system, she said. “I think that that is a mistake.

“I think school boards really have to be sensitive to the fact that the late arrivals especially might need a lot of support … and among early arrivals there are obviously some kids who are still dragging behind.”