Paul Paton brings sterling track record as a litigator, a teacher and an administrator. 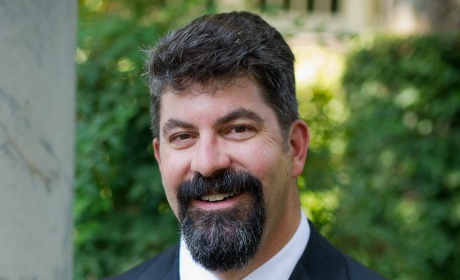 Paul Paton will be the new dean of the Faculty of Law effective July 1.

(Edmonton) Paul Paton, law professor and former vice-provost at the University of the Pacific, will be leaving his California posting to become dean of the Faculty of Law, effective July 1.

“There is a tremendous energy at the University of Alberta that I have not seen elsewhere,” said Paton, who will also take up the title Wilbur Fee Bowker Professor of Law in honour of the esteemed former dean of law who led the faculty from 1948-1968. “The U of A law school occupies a unique place historically and presently in the legal profession, certainly in the province, in Western Canada and nationally, and it is a great time to help move it forward to face new challenges.”

Paton succeeds Philip Bryden, who has been dean since 2009.

“Dr. Paton believes that a Faculty of Law can and should play a central role in the academic, professional and public policy life of the communities it services locally, nationally and internationally,” said U of A provost Carl Amrhein. “Dr. Paton is known for planning and implementing change in diverse environments. He has a strong reputation for an inclusive management style, operating with an effective combination of collegiality, discipline and deliberative action. He constructively demands excellence from himself and others, while helping students and colleagues ‘raise their game.’”

Although there were no lawyers in his family growing up in Mississauga, Ont., Paton—whose Ukrainian ancestors first settled in the Alberta prairies in the late 1800s—says he remembers a household with a healthy respect for the power of law, legal institutions and parliament in Canada, and respect for the role of lawyers in facilitating access for people who otherwise wouldn’t be able to get access themselves.

“Understanding and appreciating the law, and the importance of giving back through public service, were lessons we learned early, so perhaps it’s no surprise both my brother and I ended up going to law school,” he said.

Before law school, however, Paton would attend the University of Toronto, graduating in 1988 with a bachelor of arts with a specialist focus on international relations, and as the John Moss Scholar, the school’s top undergraduate student in the faculty of arts and science.

Paton’s academic standing led him to Cambridge, where he completed a master of philosophy in international relations before returning to the U of T to study law. In 1992, Paton was selected to clerk with Chief Justice Charles Dubin and the justices of the Court of Appeal for Ontario. The late Chief Justice Dubin, one of Canada’s most prominent litigators, was perhaps best known nationally for heading up the Dubin Inquiry into the Ben Johnson steroid scandal.

A year later, Paton left the court of appeal for a law firm on Bay Street, where he rose to partner in his four years as a corporate litigator before taking a post as justice and social policy adviser to Ontario premier Mike Harris.

In 1998, Paton began a six-year stint as an in-house counsel to PricewaterhouseCoopers LLP, heading the firm’s Canadian multidisciplinary practice initiative and serving as senior legal adviser to the firm’s national tax practice leadership.

Despite a flourishing professional career, Paton never strayed too far from his academic roots. He spent the better part of a decade splitting time between practising law and teaching in the U of T’s Canadian Studies Programme, which included three years as the program’s associate director and a year as acting director.

“Law is a very powerful degree with extraordinary flexibility,” said Paton. “Being exposed to various practice environments afforded me a unique insight into both the opportunities and challenges of bringing the academy together with the profession, while at the same time making sure the academy is attuned to these different professional environments and challenges.”

In 2001, Paton took a year’s leave from PricewaterhouseCoopers to become a fellow in the Stanford Program in International Legal Studies, where he earned his JSM and became one of only six applicants accepted into the Stanford Law School’s JSD program from his cohort. While working on his doctorate, which he completed in 2007, he was a fellow in what was then Stanford’s Keck Center on Legal Ethics, and was awarded grants by Stanford’s Institute for International Studies for his comparative work on regulation of the legal profession.

In 2004, Paton joined the academy full-time, first as assistant professor in the Faculty of Law at Queen’s University and then as professor of law at the University of the Pacific McGeorge School of Law in Sacramento, Calif.

As a researcher, Paton became renowned for his work on ethics in corporate contexts, on the role of corporate counsel, on comparative approaches to lawyer regulation and, in particular, on the transformation of structures for legal services delivery. He served two terms as chair of the Canadian Bar Association’s Ethics and Professional Responsibility Committee, and was appointed as the reporter, or expert research resource, to the prestigious American Bar Association Ethics 20/20 Commission.

As a teacher, Paton gave as good as he got.

“I was fortunate very early on to have very passionate teachers, and in many respects my work in the academy honours their legacy,” he said. “I have viewed my students as the professional colleagues they’ve become, and teaching ethics and professional responsibility has given me an especially important opportunity to play at least a small role in their professional formation. It’s been a privilege, and the chance to work with students was a driving force behind my decision to move back into the academy full-time.”

It was back on the West Coast, however, that Paton really began to relish administrative roles.

“While I’d had various university administrative responsibilities over the past 10 years, it was only recently that I was really driven to say yes, that I felt I had developed the right skill set and that the opportunity was right for me to offer something back,” he said. “It is a time of incredible transformation for the legal profession, and for legal education as well as for university education generally. I’ve been fortunate to have had experiences—both administrative and professional—that will help prepare us to identify how we can lead the way forward, and then implement the changes necessary to get there.”

Paton is leaving the University of the Pacific as director of the McGeorge Ethics Across the Professions Initiative, a 10-year, $250,000 grant, and as the 2014 recipient of the Ontario Bar Association’s Distinguished Service Award for contributions to the legal profession in that province. But he points to his experience as vice-provost as “an incredible opportunity to see from 20,000 feet how best administrators can work with faculty, staff, students and alumni to effect change.”

As vice-provost, Paton provided leadership across the University of the Pacific’s academic portfolio, including direct oversight of the associate and assistant vice-provosts for academic affairs, research and professional and continuing education, as well as the university’s Center for Teaching and Learning and International Programs and Services. He also chaired the university’s Information Strategy and Policy Committee responsible for advising on technology across the campus, directed market research for new graduate programs and collaborated on academic renovation projects and facilities utilization.

The vice-provost job also bolstered his wealth of different experiences, which Paton says will serve him well as he helps the faculty build upon the best of its traditions of academic excellence, student success and public service. Ensuring that it remains nimble and responsive in its dedication to scholarship, teaching and learning will require community commitment.

“People have to see the value in investing in the university and in the faculty, and I look forward to making the case for a renewed and robust commitment in resources and in student support that will allow the faculty to do more and do it better,” he said. “We need to make sure we're poised to address and anticipate challenges, while preparing students for excellence in the way that U of A legal education is known for internationally.”