Three students will pitch their breakthrough ideas at Falling Walls finale in Berlin. 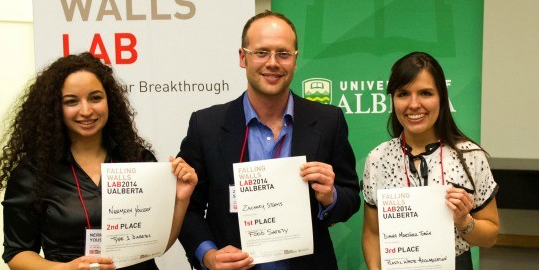 (Edmonton) Three University of Alberta students with ideas that have the potential to break down walls are off to Berlin as part of an international competition designed to showcase the quality, passion and talent of the next generation of outstanding innovators.

“What a fantastic evening. Fabulous presentations—it truly showcased some of the diverse and amazing talent and work resident here at the U of A,” said Lorne Babiuk, U of A vice-president (research), whose office organized the event with support from the Helmholtz-Alberta Initiative. “I am immensely proud of all the presenters, and so proud to host such an event here.”

Storms, an Alberta Innovates – Technology Futures Post-doctoral Fellow in the Department of Chemical and Materials Engineering, says the idea he pitched stems from a collaborative research effort led by professors Dominic Sauvageau and Anastasia Elias to design a food packaging material with a built-in biosensor that could alert consumers and producers in the event of bacterial contamination. The sensor works by inducing a specific bacterial cell to produce a biomolecule. The biomolecule produced by the cell will react with the packaging material, resulting in an easily detectable indicator such as a change in colour.

“We have filed a provisional patent for our technology and we are working on developing a prototype over the next 12 months to demonstrate a proof of concept and to submit the full patent. Hopefully that will open the door to additional research funding so that we can improve on the prototype and develop a commercial product,” he said. “We are also working with MBA students and eHUB to develop a business plan.”

Storms, who moved here two years ago after completing a PhD at McGill University, says he was drawn to the U of A for the chance to work on a groundbreaking research project in a collaborative setting.

“I could not be happier to have landed a position working among such a professional, creative and hard-working group of people,” said Storms, “The U of A, and the department in particular, is set up to provide seamless access to a vast array of the most up-to-date research and analytical tools required to complete advanced technological studies.”

He adds that he wants to be actively involved in the process of taking scientific discovery and transforming it into commercial products useful to society.

Storms’ presentation was chosen by the panel as the winner for the Falling Walls Conference finale in Berlin Nov. 8. However, prior to the event competition, organizers decided that the U of A would send the top three qualifiers.

“I am originally from Egypt and moved to Canada for my PhD,” she said. “Coming to the U of A offered a fantastic opportunity to train under and collaborate with world-class researchers.”

Martinez Tobon, whose work is also co-supervised by Sauvageau and Elias, presented an idea on how to break down plastic waste accumulation by improving the activity of an enzyme that can degrade a biopolymer.

The second-year graduate student, who transferred into the PhD program at the beginning of September, says the idea came as the next stage for the project that she was developing for her master of science degree, which consisted of screening and characterizing bioplastic degrading enzymes.

With a biomedical engineering degree in tow, Martinez Tobon says she left the workforce in Colombia for the U of A eager to move forward with her graduate studies, “working on innovative research in a top university that welcomes people from all over the world.”

“My best friend, who also attends the U of A, told me about the institution, so when I was given the opportunity to come, I saw for myself that the U of A embraces talented and enthusiastic international students who want to make a contribution to science and research.”

“I am also thrilled that Germany allowed us to send our second- and third-place winners as well as our first-place winner—they will do the university and the province proud,” said Babiuk.

Presentations were judged on breakthrough factor, relevance and impact, and structure and performance. The panel included Jillian Buriak, chemistry professor and Canada Research Chair in Inorganic and Nanoscale Materials; Richard Fedorak, professor in the Department of Medicine; Cory Janssen, alumnus and investment firm co-founder; Ingrid Johnston, associate vice-president of research, and professor of education and curriculum studies; Dan Rizzoli, assistant deputy minister with the Government of Alberta’s Ministry of Innovation and Advanced Education; Zainul Mawji, Telus vice-president of operations and strategy execution; and Paula Simons, columnist with the Edmonton Journal.