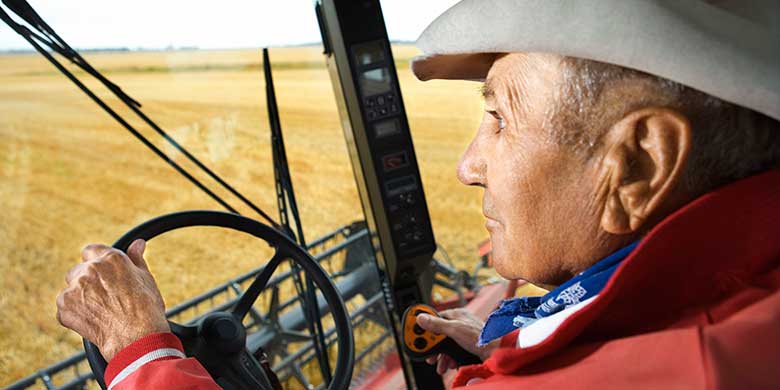 121113-farmsafety-banner
Farmers turn to operating heavy machinery as they get older, raising their risk of injuries and fatalities, according to UAlberta research.

(Edmonton) Older North American farmers work fewer hours than their younger peers but spend more time operating heavy machinery and equipment—raising their risk of serious injury, according to new research from the University of Alberta.

A survey of 2,751 Saskatchewan farmers showed that as farmers age they turn to less physically strenuous work such as operating machinery. Farmers aged 45 to 64 years spent six to eight more days a year operating tractors and combines than farmers 20 years their junior—a situation that puts older farmers at risk, say the study authors.

“It’s important for farmers, especially those from farm families where the older 60-plus crowd is still working, to understand that operating machinery is still a high-risk activity,” said lead author Don Voaklander, a professor in the School of Public Health and director of the Alberta Centre for Injury Control and Research.

The study, published in the November issue of the American Journal of Industrial Medicine, found that farmers aged 45 to 54 spent a median of 67 days a year operating tractors and combines—the most among any age group—followed by farmers aged 55 to 64, who spent 65 days operating machinery.

In comparison, farmers aged 25 to 34 spent just 61 days on machinery.

The farming industry is greying faster than any other occupation in North America, with an average age of 55 years—and that’s only going to rise, Voaklander says.

The study included input from 519 seniors, with farmers between 65 to 74 years old working a median of 46 hours a week on the farm—just one hour less than farmers 40 years their junior. Farmers aged 75 and older worked 34 hours.

Floyd Anderson has had his share of close calls on a farming and ranching career that spans six decades. Now 73, he continues to put in 12-hour days, partly because he loves the work and partly to help his family.

“I’ve had too many close scrapes, actually,” says Anderson, who runs a 300-head purebred cattle operation near Cardston, Alta. One of those close calls was getting his arm caught in the main drive of a combine.

“That dang near took my arm off,” he says of the incident, which could have been far worse than a cut arm had the heat of the machine not cauterized the wound. “The smoking belt cauterized the artery that was cut and I made it to town.”

Voaklander notes most farm fatalities are caused by working on tractors and mowing machines or working with animals, and that older farmers in particular are at high risk.

Voaklander says newer machinery has better platforms, deadman switches and safety guards that reduce injury risk. He recommends staying in contact with family as much as possible, and says family members should also heed warning signs of declining sensory capabilities such as dented or scraped machinery, or damaged fence posts.

The study was funded by the Canadian Institutes of Health Research and the Canadian Centre for Health and Safety In Agriculture.