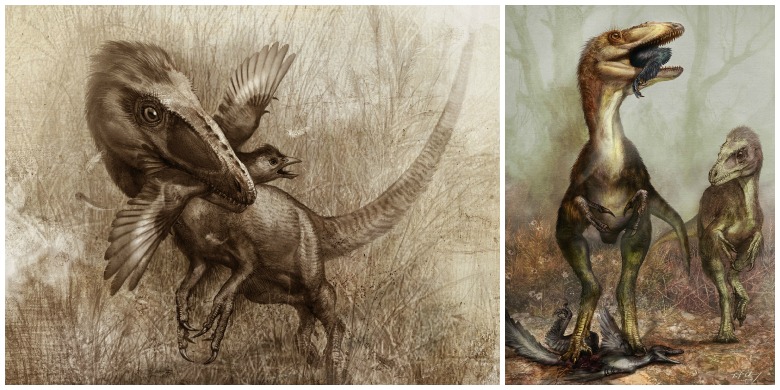 (Edmonton) University of Alberta researchers have found evidence that a feathered but flightless dinosaur was able to snag and consume small flying dinosaurs.

The U of A paleontology team found the fossilized remains of three flying dinosaurs in the belly of Sinocalliopteryx, a raptor-like predator that was about two metres long and roughly the size of a modern-day wolf.

Sinocalliopteryx’s flying meals were three Confuciusornis, one of the earliest known birds, which had a crude version of a modern bird’s skeleton and muscles. The researchers say such primitive birds were probably limited to slow takeoffs and short flights.

According to the researchers, this is the first time a predator has been linked to the killing of multiple flying dinosaurs.

Scott Persons, a U of A paleontology student and research co-author, says Sinocalliopteryx may have used stealth to stalk the flyers. “Sinocalliopteryx didn’t have wings or the physical tools needed to be an adept tree climber.”

Persons explains that Sinocalliopteryx had feathers or hair-like fuzz covering its body, creating a level of insulation that helped maintain a warm body temperature and a high metabolism that required a lot of food to fuel.

“The fact that this Sinocalliopteryx had not one, but three undigested birds in its stomach indicates it was a voracious eater and a very active hunter,” said Persons.

This find was made in China’s Liaoning province. U of A researchers also analyzed stomach contents of a second Sinocalliopteryx fossil discovery from that area. The researchers identified this Sinocalliopteryx’s last meal as a Sinornithosaurus, a small feathered meat-eater about the size of a house cat that may have been able to fly or glide short distances.

“Sinornithosaurus is a relative of Velociraptor, which means this is the first direct evidence of a raptor becoming another predatory dinosaur’s meal,” said Persons.

The research was led by Lida Xing, a U of A master’s paleontology student. The U of A co-authors include Tetsuto Miyashita, Michael Burns and Philip Currie. The research was published Aug. 29 in the journal PLoS ONE.