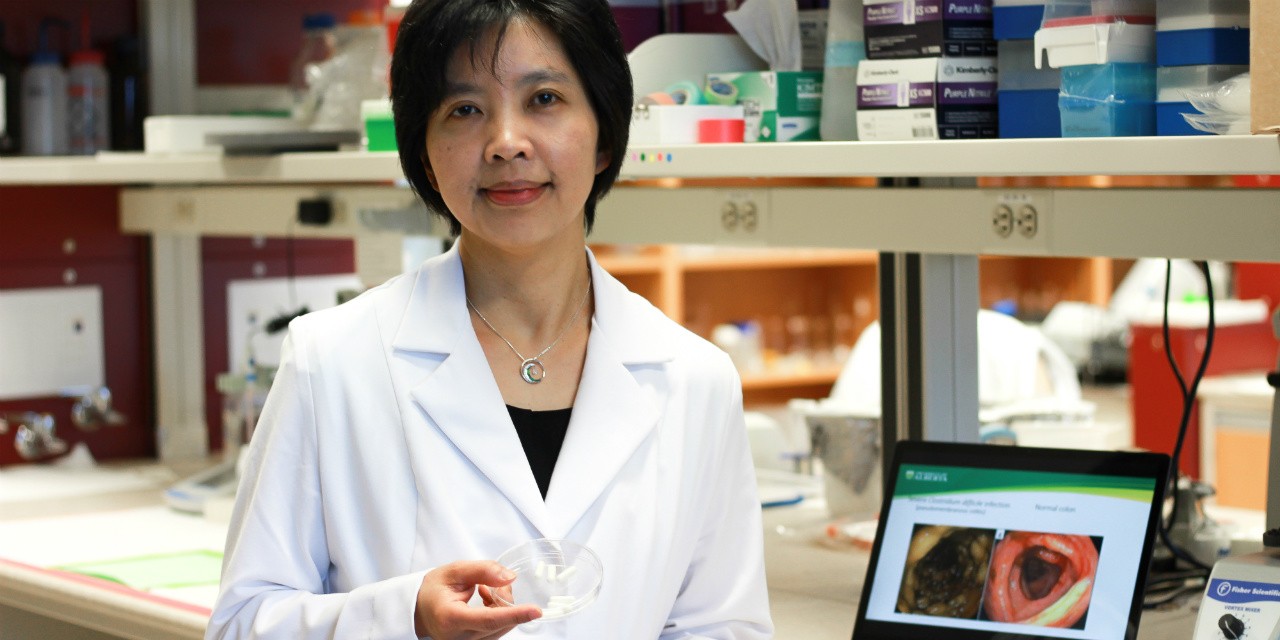 Gastroenterologist Dina Kao with a sample of fecal transplant capsules. Kao was lead author of a study showing that the capsules were as effective as a colonoscopy at treating C. difficile infection. (Photo: Melissa Fabrizio)

Fecal transplant capsules were found to be just as effective as a colonoscopy in treating patients with C. difficile, an Alberta-led clinical trial has shown.

The finding, published today in the Journal of the American Medical Association, could revolutionize and broaden the use of fecal microbiota transplant (FMT), which restores the healthy balance of bacteria living in the intestine by transferring a healthy donor’s stool to the gut of a person with C. difficile.

“This will transform the way people think about how we deliver fecal microbiota transplant,” said Dina Kao, the lead author of the study, an associate professor with the University of Alberta’s Faculty of Medicine & Dentistry and an Alberta Health Services (AHS) gastroenterologist.

Capsules containing frozen donor bacteria taken orally were shown in Kao’s study to be 96 per cent effective in treating C. difficile, the same success rate as those receiving transplant by colonoscopy.

“Capsules have numerous advantages over colonoscopy. They are non-invasive, they’re less expensive, they don’t have any of the risks associated with sedation and they can be administered in a doctor’s office,” said Kao, adding the capsules have no scent or taste.

Humans are host to hundreds of different species of gut bacteria, which together help the digestive and immune systems function properly. When a harmful infection requires treatment with antibiotics, those same antibiotics can disrupt the healthy balance of the gut bacteria, allowing opportunistic microorganisms such as C. difficile to move in and cause illness.

People with C. difficile infections suffer from diarrhea, cramping and other gastrointestinal difficulties. In advanced cases, it may be necessary to remove the large intestine. Although rare, C. difficile can be extremely debilitating and resistant to treatment by antibiotics. In some cases, it can be fatal. In Alberta, there are about 200 C. difficile cases every year, of which between 20 and 40 are fatal.

Karen Shandro of Ardrossan, 30 kilometres east of Edmonton, came down with what was thought to be a routine sinus infection early in 2015. After a course of antibiotics, a tenacious C. difficile infection set in and knocked her off her feet. Further courses of antibiotics did little to help.

“I felt awful. My health deteriorated. I had unbearable diarrhea, no appetite, chills and fever, and I couldn’t keep any food in me,” said Shandro, whose condition became so bad her husband phoned an ambulance and she was taken to the emergency department at the Fort Saskatchewan Community Hospital.

Shortly afterward, Shandro learned about Kao’s study on FMT and agreed to be enrolled in the trial. She was selected at random to receive the transplant via capsules.

Although Shandro said there was no unpleasant taste or aftertaste to the pills, the sheer number she had to take—40 capsules within an hour—was a bit of a challenge.

“Afterwards I went home and slept for four hours, then woke up starving, which was something new to me at that point,” she recalled.

Her health continued to improve and within two days, she felt upbeat and like her normal self. Today, she considers her C. difficile infection conquered.

Kao said the two-year study is the first to compare different delivery methods using the same amount of donor stool. It is also unique in that it looks at patient preference and experience. She said on the strength of the research, she can now begin offering patients a choice between delivery methods for FMT. Work is also underway within AHS to examine ways to offer FMT capsules more broadly.

Kao noted the oral method of FMT would likely save the health system a minimum of $1,000 per patient. Thomas Louie, Calgary FMT co-lead and senior author on the paper, pioneered the development of the FMT pill.

Kao’s work is funded by a $500,000 grant from AHS and $357,000 from community donors through the University Hospital Foundation.