New $148-million pilot program will give up to 11,000 university and college students across Canada a chance to gain international experiences and skills. 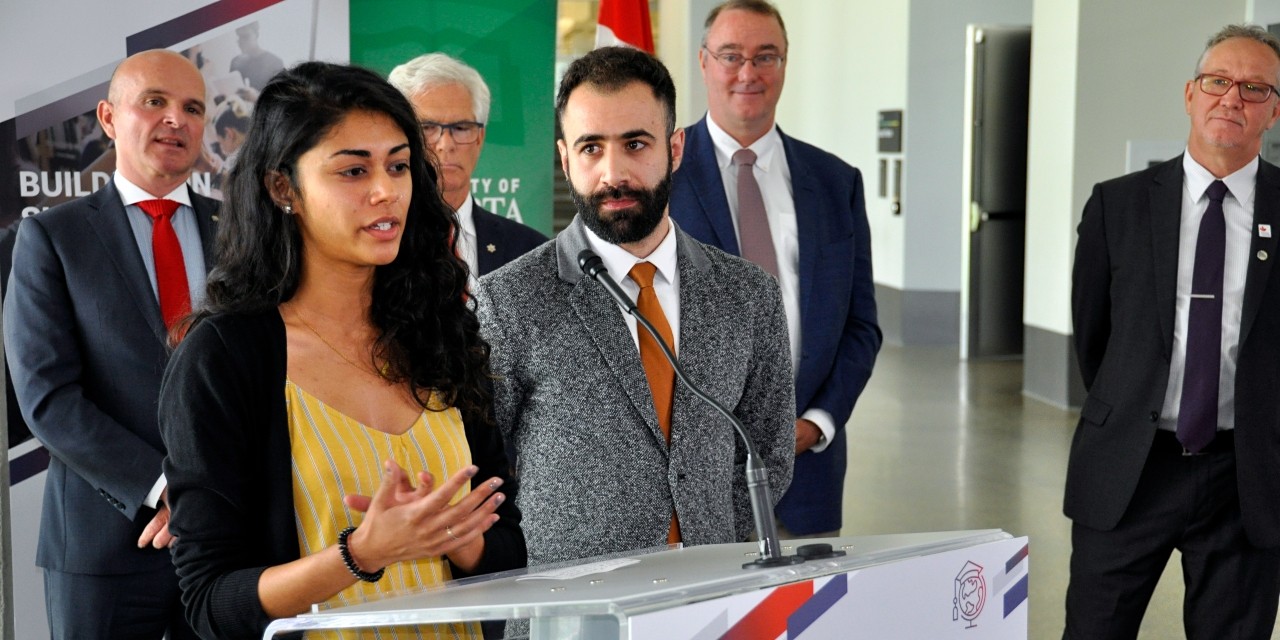 U of A master’s student Monica Shandal and PhD candidate Fahed Elian talk about their international experiences during the announcement today of nearly $148 million in federal funding for post-secondary education abroad. (Photo: Michael Brown)

Monica Shandal said she always wanted to use her abilities to make a difference and help people but wasn’t sure what they were or how to apply them.

Then, the University of Alberta master’s student in agricultural and resource economics travelled to India as part of a study abroad program to explore challenges of the rice seed production system.

“I was exposed to problems that I never thought could be in the realm of what I was good at and what I was capable of doing,” said Shandal. “Seeing and working with these people with the International Rice Research Institute sparked something ... some sort of passion that I guess I had inside me that I never really found while just being here.”

She said she used her newfound passion to guide her master's thesis looking at ways to empower women in rural communities in India as a way to develop those communities.

“This is an independent project that was only made feasible through the connections that I made going abroad and the experiences that I gained with my internship that University of Alberta International provided me,” she said.

It is Shandal’s story and thousands others similar to it that are fuelling a new federal government global mobility program looking to give more Canadian students a chance to study abroad.

The Outbound Student Mobility Pilot, announced today at the U of A as part of the Government of Canada’s new $147.9-million International Education Strategy, will provide funding for up to 11,000 university undergraduate and college students to gain in-demand international skills and experience during their studies.

Minister of International Trade Diversification Jim Carr, who was on hand for the announcement, said only 11 per cent of Canadian university students take part in international study over the course of their degree, compared with international peers such as France, Germany, Australia and the United States, where students go abroad at rates of 33 per cent, 29 per cent, 19 per cent and 16 per cent respectively.

“We're not where we should be. It's not where we want to be and it's not where we will be,” said Carr. “(Other countries) don't have these higher percentages by accident—it's intentional. They have made a commitment to address gaps in their workforce, to increase their competitiveness and to strengthen diplomatic relations in the long run with key countries. And we have to do the same.”

Paul Davidson, president of Universities Canada, said the five-year pilot program, which will be jointly administered by Universities Canada and Colleges and Institutes Canada, is an important step toward achieving Canada’s trade diversification goals and strengthening international networks.

“Study abroad changes lives. The new Outbound Student Mobility Pilot is significant news for young Canadians and for Canada,” said Davidson. “Canada’s universities look forward to working with our partners in government and the higher education sector to enable more students, from all backgrounds, to participate in global mobility experiences.”

Employment and Social Development Canada will design the Outbound Student Mobility Pilot in consultation with Universities Canada, Colleges and Institutes Canada and other stakeholders.

The pilot will launch in 2020. Funding for bursaries will be based on applications.