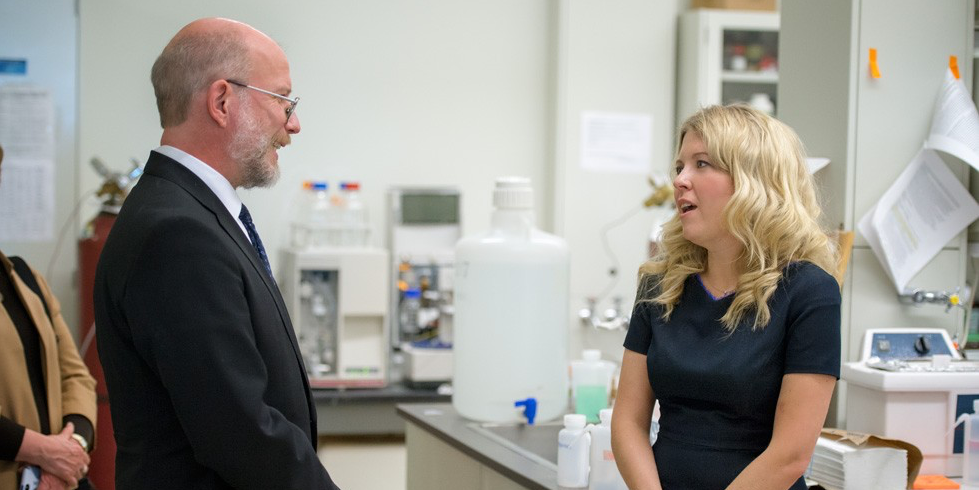 (Edmonton) The University of Alberta’s status as an important centre for research and its practical applications in the burgeoning field of metabolomics has received a boost thanks to new funding from the Government of Canada.

The Honourable Michelle Rempel, minister of state for western economic diversification, today announced an investment of nearly $3 million toward state-of-the-art metabolomics assessment equipment for the U of A’s new Metabolomics Technology Demonstration Centre, which is set to open in the spring of 2015.

“Our government is proud to support the establishment of the Metabolomics Technology Demonstration Centre. By creating a hub for scientists and businesses to transform innovative research discoveries into viable products, we are further positioning Alberta at the forefront of the metabolomics market,” said Rempel.

Metabolomics is the study of all small-molecule compounds, or “metabolites,” in cells, tissues and biofluids. These compounds provide a functional readout of the developmental, physiological  or pathological state of a biological system. The field of metabolomics has expanded rapidly over the last few years with increasing applications to disease diagnosis, drug toxicity screening, nutritional studies and many other life sciences. The U of A houses the world’s largest collection of metabolomic standards and most of the world’s metabolomic data resources.

The WED funding will go toward a 700 MHz nuclear magnetic resonance machine and quadrupole-time-of-flight mass spectrometer that will be used to assist companies in the metabolomics sector in moving biomarkers from the research lab to the medical testing facility, the farmer’s field and the doctor’s office, according to David Wishart, a professor in the U of A’s departments of biological sciences and computing science, and project lead at the Metabolomics Innovation Centre. Currently one-third of the world’s metabolomics companies are located in Alberta.

The U of A is already home to the Metabolomics Innovation Centre, a Genome Canada-funded science and technology centre with a mandate to provide services and technology development support for all Canadian researchers. The Metabolomics Technology Demonstration Centre will enable the development of prototype tools based on these efforts. The two centres will work closely to translate discoveries into methods, devices and kits that can be used in many applications, including clinical testing.

“The Metabolomics Technology Demonstration Centre will provide Canadian researchers with cutting-edge infrastructure and technical expertise to support translation of innovative biomarker discoveries into real-life applications,” said Wishart. “We are very excited to work with our collaborators to develop prototype tools and products that will be implemented and commercialized through industry partnerships.”

In addition to an investment from the National Institute for Nanotechnology, Alberta Innovates – Health Solutions, the U of A spinoff company Metabolomics Technologies Inc., and Genome Canada are also contributors to this project.

Read the Government of Canada release

Listen to a podcast with David Wishart (Genome Alberta)