New space will facilitate collaboration between industry and academia to bring new AI products to market. 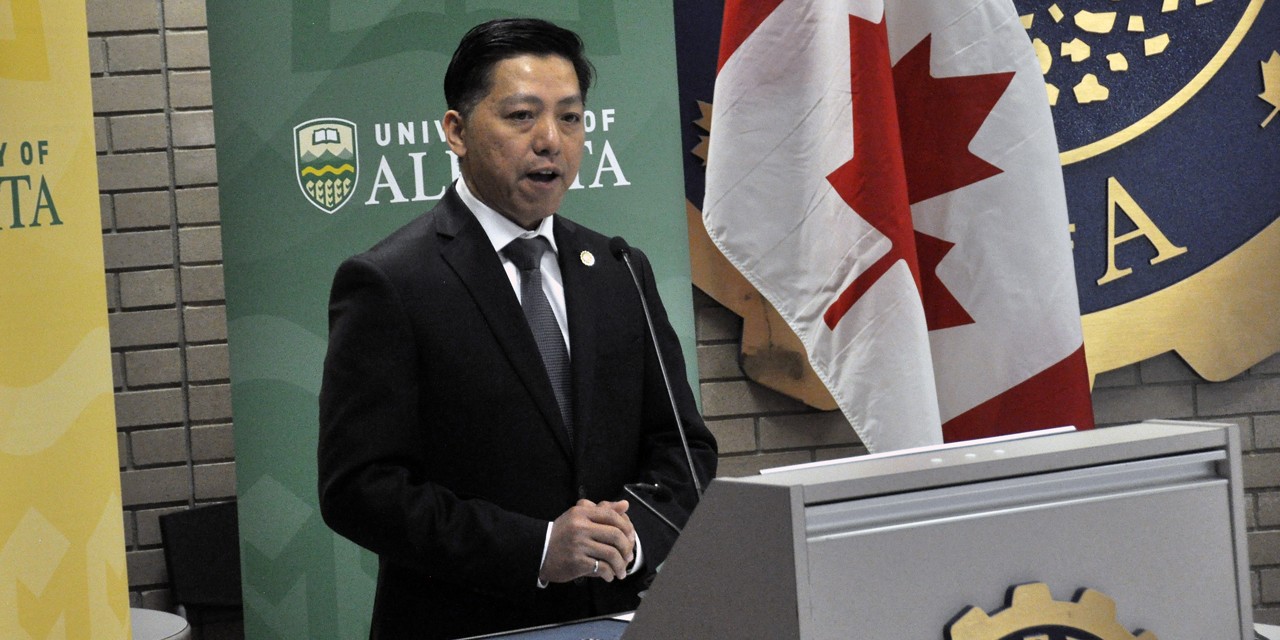 U of A Engineering researcher Edmond Lou, who was a catalyst for the AI Hub, said he expects the supercomputer facility will benefit companies, academics and students, and raise the profile of Western Canada’s AI expertise and ecosystem nationally and internationally. (Photo: Michael Brown)

The federal government believes Edmonton and the University of Alberta will lead Canada into the coming artificial intelligence (AI) revolution, which is expected to increase global GDP by $15.7 trillion by 2030 and disrupt every facet of life.

That’s why Western Economic Diversification Canada announced $2.5 million for the creation of the Artificial Intelligence-Supercomputing Hub for Academic and Industry Collaboration at the U of A, today.

The innovative space, equipped with high performance computers capable of processing vast amounts of raw data in hours instead of days, is designed to be a collaborative link between industry and academia to bring new AI products to market.

“In a market of such potential, Canada must take part and I believe Edmonton can lead us,” said Amerjeet Sohi, federal minister of natural resources, who was on hand to make the announcement on behalf of the Government of Canada.

“The AI-Hub will help Canada and Canadian businesses compete in the global innovation race to bring new technologies and products to market and bolster our economy.”

Sohi said the AI Hub, as it will be known, will help attract and retain talent, provide training in AI for western Canadian companies and for 100 highly qualified personnel.

Edmond Lou, professor in the Department of Electrical and Computer Engineering who was a catalyst for this project, added hundreds of students will have opportunity to access this supercomputer facility, while it creates jobs for both of undergraduate and graduate students within the campus environment.

“This project will lead to economic growth and raise the profile of Western Canada’s AI expertise and ecosystem nationally and internationally,” said Lou.

Ivan Fair, chair in the Department of Electrical and Computer Engineering and emcee for the announcement, recognized the achievements in AI by the Faculty of Science, in particular the Department of Computing Science and the Alberta Machine Intelligence Institute, and expressed a desire to work together “as scientists and engineers, using our complimentary strengths to build a better tomorrow.”

Accompanying Fair, Lou and Sohi were Randy Boissonnault, Member of Parliament for Edmonton Centre; Mehadi Sayed, president and CEO of Clinisys EMR Inc., who spoke on behalf of industry partners; and U of A president David Turpin.

“Today’s funding announcement will advance innovations in artificial intelligence and data processing and will help the development and commercialization of university-led research, inventions and technology for years to come,” said Turpin.

Federal funding will also support marketing initiatives to increase the profile of Alberta’s AI sector, which includes showcasing local industry at the AI and Interaction Digital Entertainment (AIIDE’18) International Conference currently being held at U of A, marking the first year that the event has been hosted outside of the United States.