Fiddler on the move

Classical music grad and fiddle champion Daniel Gervais is a success on any scale. 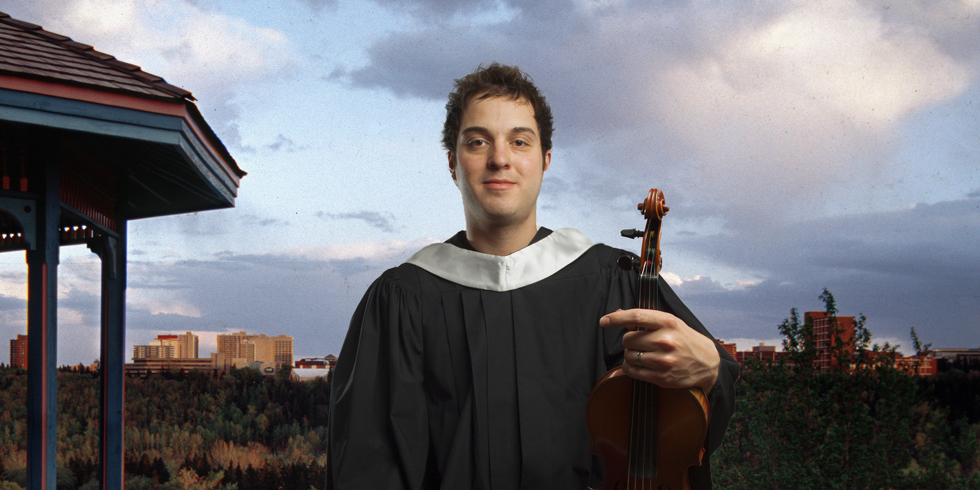 By BEV BETKOWSKI and GEOFF McMASTER

(Edmonton) Daniel Gervais has had a thing for strings since age five when he started playing fiddle, after hearing its soulful wail and liquid notes spilling from the nimble fingers of an elderly man at a campfire.

“There’s something magical about the fiddle; it’s part of many different cultures and it makes you want to dance, to cry. It sings.”

Gervais, 26, graduates June 4 with a master’s degree in classical music (on the heels of a bachelor of music earned in 2012) from the University of Alberta Faculty of Arts, a high note to a career already in full swing. He and his fiddle/violin—depending on whether he’s spinning out classical, folk or gypsy jazz tunes—have made sweet music at Carnegie Hall (at a reception before a main stage performance by the Edmonton Symphony Orchestra) and at the 2012 Summer Olympics in London. Add to that six albums, the title of Canadian Grand Master Fiddle Champion (the first and only Albertan to be so named), and numerous ongoing gigs as a teacher and performer, and Gervais is a success on any scale.

Wanting to widen his range as a professional musician, Gervais did his master’s degree under the direction of U of A music professor Guillaume Tardif, who “inspired me to delve deeper into classical music. As a fiddler, if you want to make a career, you have to be versatile. I acquired new skill sets, I raised my techniques and I was able to combine it with my academic research as well.”

Funded by a SSHRC grant, Gervais researched Canadian fiddling through the stylings of one of his idols, Alberta folk fiddler Calvin Vollrath. Tardif also drew Gervais into a larger musical documentary project, Genius of the Violin, that helped Gervais explore intricate links between his fiddling career and his classical music studies. The pair then performed and recorded their research findings.

As he turns now to a lyrical career threaded with melodies and U of A memories, Gervais is grateful for how his studies have shaped him.

“I reached a goal of getting better at what I do, and then sharing that with people.”

Daniel Gervais, who graduates June 4 with a master's degree in classical music performance, talks about the influence of professor Guillaume Tardif and performs Mark O'Connor's Caprice No. 4 in D major.

Fiddler on the move
Newsroom