The results that we have indicate that after about 2050, pretty much everything will be gone except at the highest elevations—and that’s in the Rockies as well. 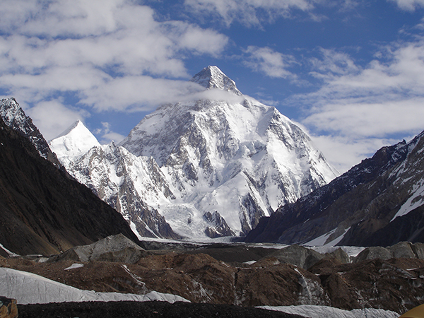 K2, as viewed from Concordia (4,550 metres above sea level), called the "Throne Room of the Mountain Gods" for the number of visible peaks over 7,000 metres.

Majority of Earth’s glaciers not expected to survive the century. 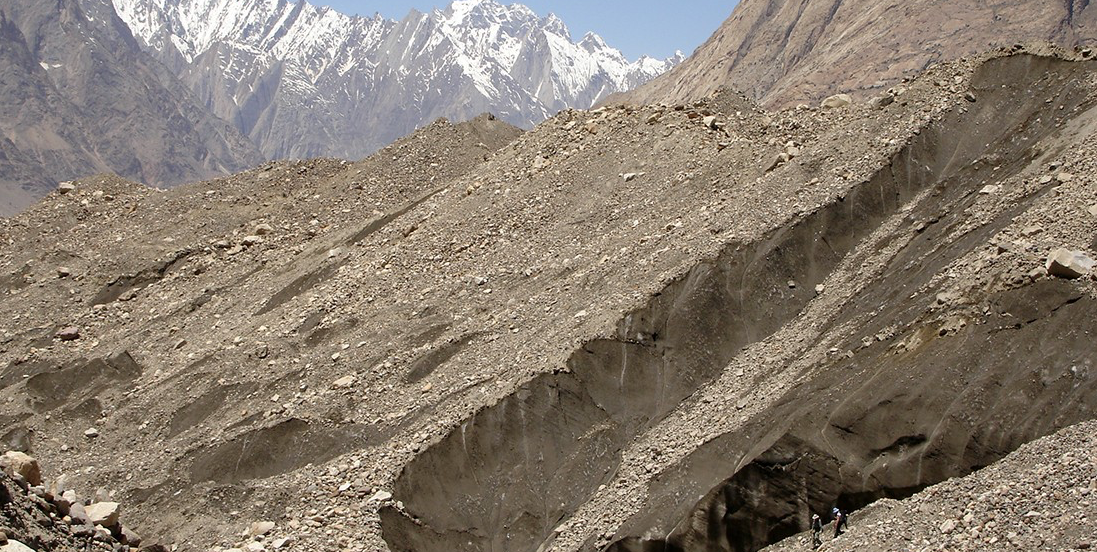 The debris-covered Baltoro glacier in Pakistan, with porters and scientists navigating the route. Thick debris, like that found on the Baltoro glacier, acts a shield to protect the ice from melting. Thin layers, however, are more likely to increase melting by attracting solar radiation. (Photo: Andy Bush)

Climatologist Andy Bush could give Indiana Jones a run for his money when it comes to pursuing science in the face of danger.

A professor in the Department of Earth and Atmospheric Sciences, Bush has travelled the world to study the world’s highest-altitude glaciers, from the Rockies in Alberta to the perilous snow-capped peaks of the Himalayas. The physical dangers inherent to climbing to the Earth’s tallest peaks are rivalled only by the political perils of the regions. In a 2010 trip planned to the Batura Glacier in northern Pakistan—what would be Bush’s second expedition to the region after exploring the Baltoro Glacier leading to K2, the world’s second-highest peak—world events brought his team’s plans to a screeching halt.

“We were getting our plane tickets and visas and everything, and then two weeks before we were supposed to go, the navy SEALs went in and killed Bin Laden,” says Bush. “So for safety, with two helicopters of Americans and a Canadian named Bush—my middle name is George—we figured it wasn’t the place for us to be.”

Instead, the team shifted focus and went to India to study hazards related to the Chhota Shigri glacier: landslides, rockfalls and floods, to name a few. “You can get glacial meltwater, and it can be blocked by say a rockfall or landslide, and water builds up behind it until it reaches a certain pressure and then it outbursts catastrophically,” says Bush, noting that these outbursts frequently wipe out entire villages.

For all their dangers, however, the glaciers also provide critical resources to nearby communities. Many populations in Southeast Asia are dependent on Himalayan runoff from melting snowpack and glaciers for irrigation, and the impending eradication of the glaciers would have disastrous consequences on agriculture in those communities.

This problem is not isolated to Southeast Asia. Glaciers are melting rapidly across the globe; by Bush’s estimate, they will be all but gone within the next 50 years.

“The results that we have indicate that after about 2050, pretty much everything will be gone except at the highest elevations—and that’s in the Rockies as well,” says Bush. His estimates, based on his work in numerical modelling, have also been corroborated by other studies using different tools such as dynamic modelling.

Bush hopes that his work in the Karakoram region of the Himalaya may yield clues to understanding this global crisis. “Glaciers are disappearing almost everywhere in the world except in this region,” he explains. “Here, about half of them are disappearing, but the other half are either staying the same or growing."

The reasons for this are not yet known, but may be partially related to the region’s unusual position of being under the influence of a variety of atmospheric phenomena, such as monsoon and the ENSO cycles—El Niño and La Niña—which in turn influence the monsoon and affect precipitation. “Geographically it’s a unique place, and the glaciers are exhibiting a unique response.”

Without this geographic advantage, Alberta glaciers’ days are numbered. “What happens is that, as things warm up, of course the glacier just retreats up to higher elevations,” Bush explains. “The rate at which it is projected to happen in the Rockies is pretty much the same as the Himalayas—but the Himalayas are higher, so they are projected to last longer.”

Although there’s not much that can be done at this point to slow or halt the eradication of glaciers, Bush stresses that the most critical changes we can make are in our attitudes toward water usage. “People need to be aware that their water resources aren’t going to last forever,” he says. “People make that assumption often, but it’s a finite resource.”

Bush will be presenting his research Feb. 14 at the American Association for the Advancement of Science (AAAS) Annual Meeting in Washington, D.C. The only attendee from Alberta, Bush has also been invited to the Canadian Embassy in Washington on Feb. 11 to meet with Canada’s Governor General, David Johnston, in advance of the meeting.

His team is planning a trip to Mt. Everest in November 2016.