“Objects hold memories and can link to past experiences, can remind a person and others of who they are.” 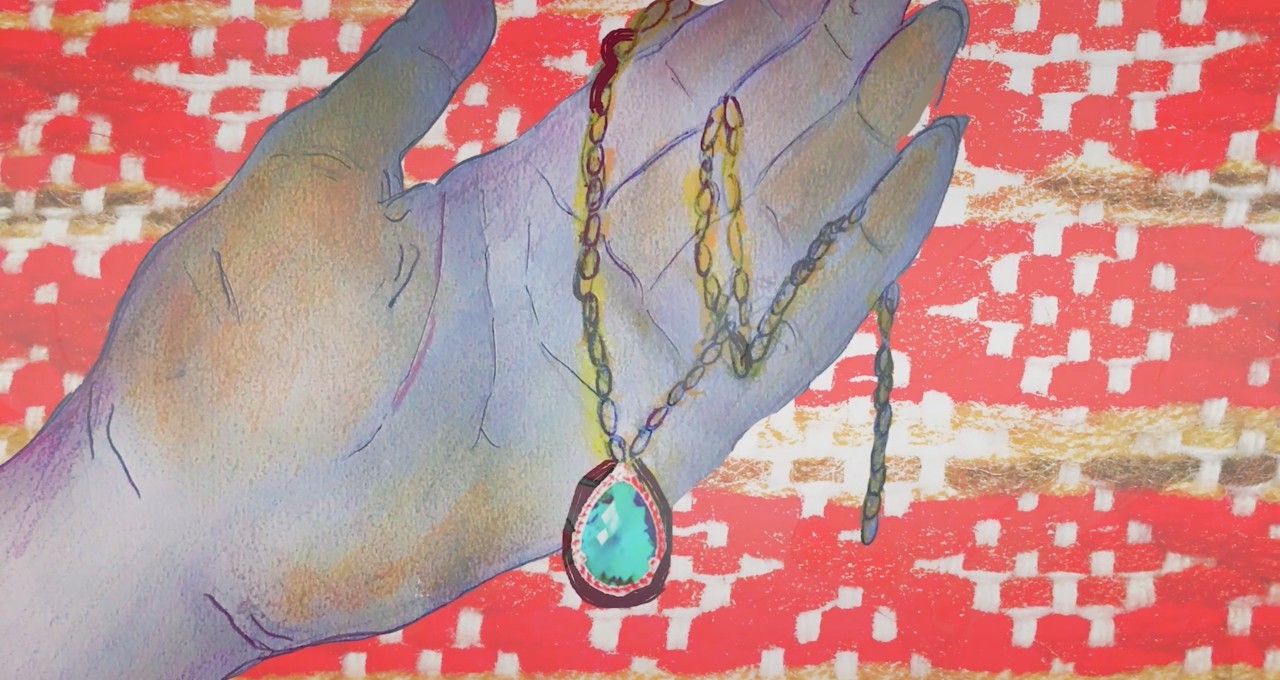 "The Necklace" is one of five short films by a U of A researcher illustrating how meaningful objects create emotional connections for seniors living with dementia. (Image courtesy of Megan Strickfaden)

Many people have cherished items they hold dear—a grandmother’s ring or scarf, a teddy bear, even a song—but for the elderly, these objects are especially precious, and a new series of short films by a University of Alberta researcher explores that emotional connection.

The films show how objects can be therapeutic to residents in care facilities.

Lushly illustrated with colourful artwork, the five narrated films centre on a specific object—a necklace, a book collection, a plant—that conjures good memories for the elderly characters described in each story.

“Each film represents a different kind of disability, different living situations, and all feature different ways that beloved objects play roles. All of these scenarios are very common to people who are aging,” said U of A design anthropologist Megan Strickfaden.

She said the idea of meaningful objects can too easily fall by the wayside when it comes time for a senior to give up their home.

“Objects can be taken for granted by caregivers and family who often will parachute in and just get rid of what they see as stuff. But there’s a need to understand the value, beyond the monetary sense, of things they own. Objects hold memories and can link to past experiences, can remind a person and others of who they are.”

The films, which involved the input of real-life seniors from three Edmonton and area care facilities, show how the connection to certain objects can ease the transition for the elderly, particularly those with dementia, from their homes to long-term care facilities.

“Objects actually help people in the aging process,” said Strickfaden, who co-wrote each of the five- to six-minute films with a writer in her 70s. “They help people communicate and experience life better with one another.”

Objects bring “layers of meaning that help people age well,” she added, using the example of her own mother, who has moderate dementia.

“She was a musician who sang and played 15 musical instruments, so for me, it was important to put those instruments in her room, to tell people about her music. It becomes a way to explain something about her even though she can no longer play the instruments.”

Caregivers are busy dressing, bathing and feeding their patients, but adding personal objects to a room can give them a way to also connect on a deeper level, Strickfaden noted.

“They often focus just on the task at hand, but by humanizing things this way, they could also be talking more deeply with the residents.”

One of the films, Musical Notes, shows how music stimulates soothing memories for a dementia patient.

The films also show how objects can be used to help in social situations. One film, titled The Necklace, tells the story of how a new, nearly blind resident strikes up a friendship after admiring her neighbour’s shiny necklace.

“Objects introduce people to one another, and that’s a key way to tell us something about one another,” said Strickfaden.

Objects can also stand in for loved ones, as illustrated in a new film Strickfaden is working on, called Papa’s Chair—due in February with another film—about a widower moving to a care home.

“They help facilitate a feeling of wellness.”

The films were created by a team of 79 people in what Strickfaden calls an “intergenerational co-creation project” that brought together care residents, their families and students who reviewed and added to the stories written by Strickfaden.

Artists, including the seniors themselves, were hired through an AGE-WELL grant to bring each story to life using colourful paint and collage, then the volunteers decided what artwork would go with each film, giving feedback on the rough cuts.

The seniors’ input “enhanced what each film could be, since they bring a real-life perspective. You’re hearing stories of real stuff that’s gone on in people’s lives.”

When the final products were presented to residents at the care homes, “There was such a sense of pride for people who worked on the films, that they contributed to something so meaningful,” Strickfaden said.

And one family who saw the films started visiting their relative more, she noted.

“They realized that, although she had memory loss, she was still worth visiting—she wasn’t just a lady with memory loss,” she said.

The care homes involved in the project are now using the open-access Vimeo films to orient their staff, and Strickfaden is developing classroom curriculum to accompany the films for use in high schools and universities.

“Medical professions have been looking at different ways of teaching compassion and empathy, and this could be a way of doing that,” she suggested.

Ultimately, Strickfaden hopes families can use the films to get a better sense of how to help a loved one settle into new living situations.

Scientists develop paper-based sensors for carbon dioxide
Scientists pinpoint areas in boreal forests that offer refuge to plants and animals as climate gets warmer and drier
‘My whole life got turned upside down’: How one student persevered after losing brother in Humboldt Broncos bus crash
U of A researcher and filmmaker chronicles Boushie family quest for legal reform
You likely won’t get COVID-19 from your pets—but you could give it to them
Student-generated map shows COVID-19 travel restrictions in Northern Canada
Newsroom