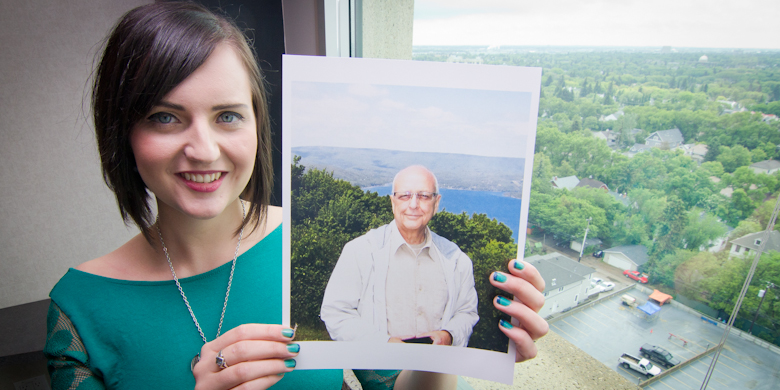 130616-haley-wolgien-banner
Haley Wolgien holds a photo of her late dad, Carl, whose last wish inspired her to seek treatment from UAlberta's Institute for Stuttering Treatment and Research.

(Edmonton) Carl Wolgien wanted his daughter to have what eluded him his entire life: fluent, stutter-free speech.

While waging a battle with stage 4 esophageal cancer that would eventually take his life last fall, Wolgien, a lifelong stutterer, handed his daughter Haley a stack of papers about the Institute for Stuttering Treatment and Research (ISTAR) at the University of Alberta. Stuttering had taken Wolgien’s words, some of his confidence and even the prospect of a career in education. Facing it head-on was a terrifying journey, one he never took before the end.

But he wanted more for Haley.

“He felt like he had missed out in his life and he had lost opportunities because of stuttering,” says Haley, a 21-year-old nanotechnology student at NAIT. “He wanted me to have a better life than he did and to not have anything stop me.”

Teachers first noticed Haley’s stutter in Grade 2, and for three years during elementary school she had speech-language training. Carl, who felt quite frustrated and upset about his own stutter, monitored his daughter’s progress very closely, hopeful for signs of fluency. It didn’t work out as hoped, leaving everyone—Haley in particular—frustrated and disillusioned.

From that point on, stuttering was another word she avoided—like so many others that wouldn’t leave her mouth fluently.

“I didn’t like hearing the word stutter. People weren’t allowed to talk about it with me,” she remembers. “I wouldn't talk about it. I would pretend it wouldn’t exist.”

A self-described chatterbox who wasn’t shy about making herself heard, Haley says there were times she felt defeated by her stutter. Like many young girls, she worried about whether she’d ever have a boyfriend. The shadow of stuttering also crept into her daydreams about what to name her future children.

“There were certain names that I would have a hard time saying. That would be the worst, to be unable to say your child’s name,” she remembers.

But ignoring her father’s last wish wasn’t an option. Haley enrolled in ISTAR’s three-week intensive therapy program and during her first assessment was diagnosed with moderate to severe stuttering. In particular, she often avoided sounds and words, says speech-language pathologist Jacqueline Quittenbaum.

“She was very sophisticated at avoiding certain words,” Quittenbaum says. She was so good most people wouldn’t notice. “The severity was lower, but she was switching words all the time under the surface.”

Despite an initial “terror” of confronting her stutter, once in treatment Haley felt relatively lucky. Some of her peers were unable even to string together a complete sentence or interact socially.

Haley made quick progress and soon served as a role model for younger peers. ISTAR’s treatment not only builds up fluency skills, Quittenbaum says, it gives transferable skills by helping people through mock situations such as ordering from a menu, buying a car or going out on a date.

In Haley’s case, she prepared to deliver a class presentation on magnetic resonance-force microscopy, going through test runs with a volunteer audience at ISTAR. Her presentation was a hit with her professor and classmates, who saw a calmer, more confident Haley.

“We know from our treatment-outcomes research that people’s attitudes about their speech improve dramatically during our treatment program,” says Deryk Beal, ISTAR’s executive director and an assistant professor in the Faculty of Rehabilitation Medicine “People are emboldened to use their newfound speaking skills in situations they otherwise would have avoided.

“Being able to communicate freely, being able to take control of your speech, saying what you want, when you want, it’s transformative.”

Since then, Haley has participated in followup treatment at ISTAR to refresh her fluency skills, something that will always require practice and diligence. She’s participated in public speaking workshops and recently gave a keynote at a special ISTAR event.

The audience raved. It wasn’t completely fluent, but it was still perfect, they said.

“I am a lot more comfortable in my skin,” Haley says. “Even outside of having improved speech, I’ve learned to be open about my speech. It’s something I’m not ashamed of.”

Talking openly about her stutter isn’t something she could have done a few years ago; nor could she have done it without her father’s push. Fluency is a gift for them both.

“He would be really proud, I think, doing the speech, talking like this. It’s a really, really good Father’s Day gift for him.”