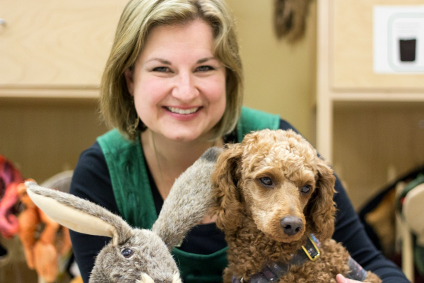 Following a devastating loss, Emily Bright Kennedy decided to channel her experiences into a career as a teacher. 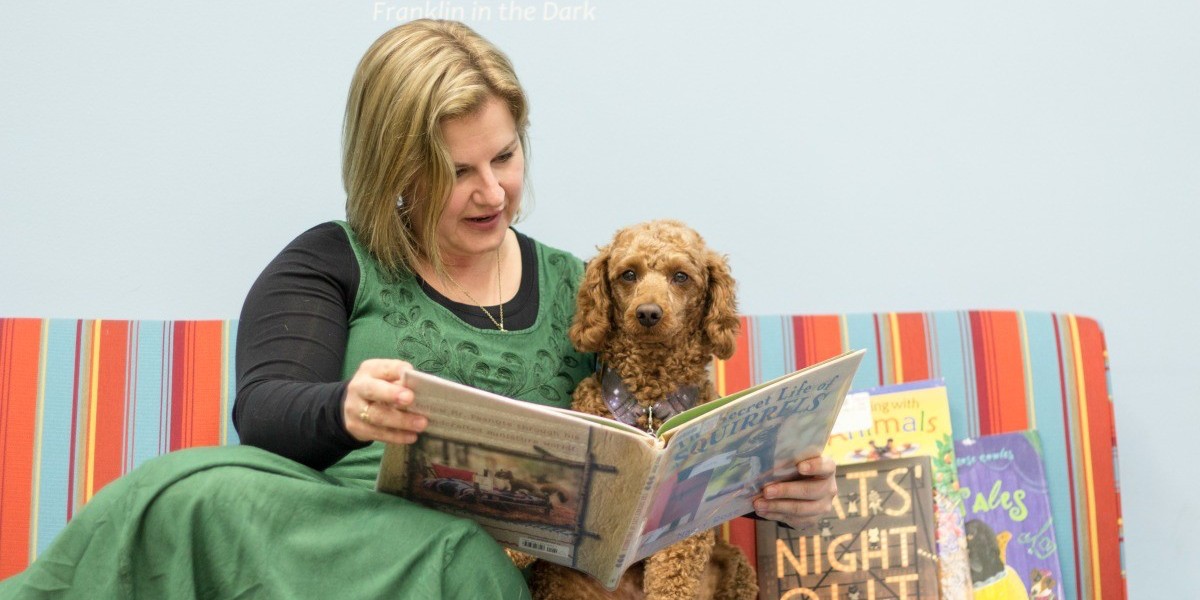 Emily Bright Kennedy reads to Ruari, her young "classroom dog in training." Kennedy has seen the power of the human-animal bond in the classroom and in her own life.

Before Emily Bright Kennedy decided to become a teacher, she was a veterinary technologist with a bachelor of science from Purdue University in Indiana and more than a decade of experience caring for animals in both Canada and the United States.

A lifelong animal lover, Kennedy excelled at emergency and critical care and also found she had a gift for handling the gut-wrenching moments when owners had to euthanize their pets.

“I was good at talking to the owner. I was good at hitting a vein and making the process smooth and quiet,” she says. “I can’t say that I particularly enjoyed ending pets’ lives, but there was satisfaction at being able to provide a needed service, and such an incredible honour to be there at the breaking of that bond.”

But that was before the accident—before Kennedy’s life took an unexpected turn and everything seemed to change.

When Kennedy first met her future husband, she was 24 and he was 54. Born and raised in Ireland, Larry was a caring man with a big personality, who had worked all over the world as an aircraft designer. The 30-year age difference was not a problem.

They married after Kennedy finished her degree at Purdue, and then they moved out to California. They had it all—satisfying careers, a supportive community and a new baby.

In 2007 they moved to rural Alberta with their young son and eight horses, and they started a new life. When they first emigrated, Kennedy was the one working—her job offer from a veterinary clinic in Wetaskiwin was what had allowed them to move to Canada—and Larry stayed at home with their young son.

By 2013, Kennedy had transitioned from vet tech to educational assistant at her son’s school in the small town of Sedgewick, Alta. She was paid more for her work in the classroom than in the clinic, and she felt fulfilled. “I had never felt so valued in the workplace,” she recalls.

Kennedy was assisting a young boy who had indicators of Asperger syndrome, and she could see positive changes in his behaviour as she used some of the animals from her farm to connect with the boy and reward his accomplishments. One of the rewards the student could work toward was a visit from Duffy the chinchilla. Another was a tea party where Kennedy and the student would drink decaf chocolate chai with goat’s milk. “He thought it was really cool that I milked goats.”

In December 2013, Kennedy came home with her son at the end of the school day to find that Larry had been in a fatal tractor accident.

“Things felt pretty hopeless for a bit,” says Kennedy. “At the celebration of life that we held for Larry in Sedgewick Community Hall, I declared to my family and friends that I was in more pain than I ever knew was possible.”

Some well-meaning people advised her to cling to her little boy for comfort and emotional support.

“He was going through his own grieving. It was my role to be there for him, not to put more on his shoulders,” she says.

Instead, the now-single mom and widow turned to her old dog Duncan as she fought with depression and trauma. A small wirehaired dachshund with big white eyebrows and a thick beard, Duncan was a reliable source of comfort.

“As a society, we’re beginning to take notice of the role that our non-human companions play in our mental health and general well-being,” says Kennedy. “These animals fill roles that no human being is capable of. It is no wonder that there’s often extreme and complex attachment to these special creatures.”

Before the accident, Duncan was a frequent visitor to Central High Sedgewick Public School. After the accident, he went to school with Kennedy every day.

“When he realized he was going to school regularly, he would wait by the door to get into the car. He loved going to work,” she says.

During this time, Kennedy did various things she describes as attempts to get her “awesomeness” back. She got a tattoo and cut her hair. She got a poodle puppy she named Ruari (pronounced “Rory”), and she decided to apply for the bachelor of education after-degree program at the University of Alberta just three months after the accident.

“The friends that surrounded me after Larry’s death gave me the courage to embark on new adventures such as attaining my bachelor of education,” she says.

The attraction to teaching had always been there for Kennedy. Before getting her BSc at Purdue, she had started and dropped out of an elementary education degree program.

The experience of studying in Edmonton at a university the size of the U of A took some getting used to for Kennedy. “It was a different university experience from my first one. Purdue is a cow college. It’s an agricultural school, and things are more spread out.”

When she’d have to spend late nights on campus working on assignments, Kennedy relied on the support of friends in her community of Flagstaff County to look after the animals on her farm and help with the care of her son.

Kennedy jokes that her son will miss those sleepovers now that she has completed her degree and plans to find teaching work close to home.

Four-legged friends in the classroom

One of the requirements of the bachelor of education degree program is that students complete two field experiences in schools—the five-week Introductory Field Experience and the Advanced Field Experience, which is almost twice as long.

Kennedy’s first field experience was in the Grade 2 class at Killam Public School, and she brought a variety of animals to the classroom, including cockatiels, lambs and goats. For her second field experience, she was placed in a Grade 6 class at the K–12 school in Daysland, Alta. There she brought her cockatiels, her young “classroom dog in training” Ruari and a bunny named Rosie.

Kennedy recounts a music class where the students made a circle on the floor, and Rosie the bunny hopped around to the music, jumping from child to child.

“I love what animals bring out in kids,” she says. “It allows me to bond with children, because you see a different side of them. You see their humanity. I get to see them through the animal’s eyes.”

Kennedy continues to train Ruari for future work in an educational context. Right now the energetic poodle is used to being the centre of attention, but Kennedy is working with him to get him used to sitting quietly and being alone. Her goal is to find work at a school that will allow her to bring Ruari in regularly, because she has seen the power of the human-animal bond at work in the classroom and in her own life.

"I've developed a firm belief that things are going to be OK, no matter how bleak they seem," she says. "I've learned that I am way stronger than I ever thought, and that I have an army of support on my side in my friends and family. Losing hurts a lot, but I can't afford to let that stop me from moving on to new adventures and loving the next animal, person or child that life puts in my path."