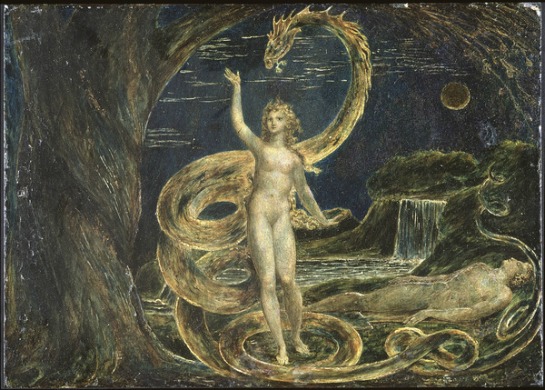 (Edmonton) For centuries, theologians and philosophers have been preoccupied with understanding why, despite all our social and technological progress, we can’t escape the experience of human suffering.

The Catholic Church insisted that Adam and Eve disobeyed God, who then threw the couple out of heaven with a curse that humankind, particularly Eve, would know pain and death until a child yet unborn, God’s son, redeems humanity.

But some have questioned the Biblical account’s authority, and John Milton was one of them. In his epic poem Paradise Lost, the 17th-century British Puritan author and revolutionary rejects the Catholic Church’s misogynist justification for pain and suffering, two University of Alberta researchers say.

In their study, “Eve's Labours: Procreation, Reproduction, and the Politics of Generation in Paradise Lost,” English professor Corrinne Harol and graduate student Jessica MacQueen examined Milton’s representation of Eve in light of 17th-century scientific ideas about reproduction. The duo say this research may help inform present debates on female reproductive choice—and remove the blame on Eve for humankind’s pain and suffering because of sin.

“The misogynist idea is that women descend from Eve, and so women suffer because of her original sin. Milton is redeeming Eve. We can’t understand woman’s suffering in childbirth as a punishment,” MacQueen says.

Instead, the authors argue, bearing children should be understood as a choice.

“Pain is not a punishment. It’s a choice—and the choice to reproduce is what’s going to redeem humanity because a woman had to give birth to Christ. So over and again the poem says Eve’s seed is going to bruise the head of Satan,” Harol says.

After they eat the infamous apple, Adam and Eve debate not having children. Harol says that after the couple considered suicide and abstinence, it appears that Eve had the last word.

“Eve was told she had to obey Adam, that’s part of the curse. But we want to emphasize that they had a debate as to what they should do, and we know that Eve knows how to cultivate or prevent childbirth because of her gardening skills. So she was the scientist. And she says, look, we could abstain from sex, but that wouldn’t be fun,” Harol says.

“In the end, their decision to reproduce is based on the promise that one day, future generations will be redeemed by Christ,” MacQueen adds.

When it comes to Milton rejecting the image of Eve as the source of sin, MacQueen explains that in Paradise Lost, Satan produces sin through his imagination.

“We argue that Milton’s poem reconfigures the misogynist discourse that had traditionally justified women’s pain in childbirth as punishment for Eve’s disobedience in eating the forbidden fruit.”

The duo say their work helps illuminate why discussions on reproductive rights are so political, and why the question of choice was as important in Milton’s time as it is now.

“In some ways, we’re arguing that Milton makes the case that a woman’s body is hers and she gets to do what she wants with it,” Harol says. “But the right choice is to have the baby—not because you’re pregnant, it’s not an abortion question—but because that’s how you participate in culture, that’s how you create society. And that’s eventually how you give birth to the person who’s going to redeem humanity. This is the beginning of modern ideas of what we call human agency, grounded in the new scientific ideas of the time.”