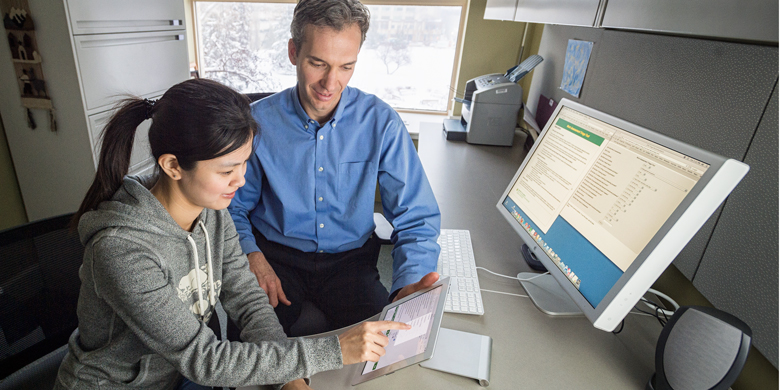 Doug Gross (right) and his UAlberta research team developed an interview-based test to ensure injured workers are ready to return to the job. The test is as effective as physical assessments, without the risk of painful flare-ups. (Photo: Richard Siemens)

(Edmonton) James McKinnon felt a searing jolt of pain in his shoulder the instant the warehouse dolly—fully loaded with a brand new sofa—jammed on the loading dock, bringing them both to a sudden stop.

“My shoulder popped out and then popped back in,” McKinnon remembers of the day, April 10, when he injured himself at work. “It wasn’t a true dislocation because the joint didn’t stay out, which was lucky, but I felt my whole arm drop and I dropped the sofa.”

Following the accident, McKinnon underwent a functional evaluation where he performed physical tasks similar to his duties as a warehouse labourer to gauge the severity of his injury and determine the best course of treatment.

“It was a lot of discomfort,” says McKinnon, whose tests included lifting a box filled with a progressive amount of weight. “By the end, I couldn’t even push with my right side, it was so fatigued.”

A University of Alberta research team has designed a new approach to evaluating workplace injuries through client interviews that spare clients like McKinnon from having to endure time-consuming physical testing. During a randomized controlled trial, the interview approach proved just as effective as physical tests, without the risk of pain flare-ups.

“Most people have a sense of what they can or can’t do but are looking for expert advice. This format can be an interventional tool that helps them decide and feel comfortable with what they’re capable of doing,” said Doug Gross, an associate professor of physical therapy in the Faculty of Rehabilitation Medicine.

“This has the potential to do considerable good for patients, employers, insurance providers—and really the economy as a whole.”

More than 400 workers with muscle, ligament, tendon and bone injuries participated in the trial. Half were chosen at random and tested using standard physical evaluations; the rest underwent interviews conducted by trained clinicians.

Researchers found no differences in patient outcomes between the physical tests—which can take up to eight hours and require a trip to a clinic—and the two-hour interview format, which, Gross says, can be done almost anywhere, potentially including phone or video calls. Distance interviews still need to be tested, he cautions, but theoretically they could benefit rural patients and those working in remote areas, including Alberta’s oilpatch.

“That would be huge for an injured worker in Fort McMurray who otherwise would have to come to Edmonton.”

Gross, whose research is affiliated with WCB-Alberta Millard Health, a provider of occupational rehabilitation and disability management services, said the results have generated interest not only in Alberta, but also among academics in Australia, Europe and at WorkSafeBC, which helped fund the work. It’s the type of research made possible by being at the U of A and having strong relationships in the community through WCB-Alberta Millard Health.

“This has the potential to do considerable good for patients, employers, insurance providers—and really the economy as a whole.”

The research team also included Michelle Crites Battie, Linda Carroll and Maxi Miciak from the U of A as well as colleagues from Alberta Health Services and WCB-Alberta Millard Health. Their study was published in the Archives of Physical Medicine and Rehabilitation.