Finding purpose in the search for answers

Sixty-year-old student seeks to unravel mysteries of the cancer that claimed his wife. 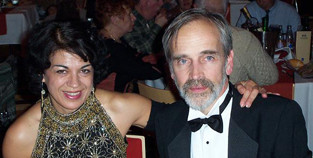 Not long after the death of his wife Sladjana in 2009, Powel Crosley enrolled at the U of A determined to help find a cure for the rare form of ovarian cancer that took her.

(Edmonton) Powel Crosley’s eyes light up when he speaks of his wife Sladjana.

She had tremendous drive and determination to look into things and achieve things. She was incredibly intelligent and just a very strong person.”

Five years have come and gone since Sladjana’s death from granulosa cell tumour of the ovary (GCT), a rare form of ovarian cancer. It is clear, though, that Crosley still loves her as much today as when they were married in 1990.

Her death crushed me, quite completely. It still does.”

About 2,600 women are diagnosed with ovarian cancer each year in Canada. Of those, five to eight per cent of the cases will typically suffer from GCT. Eighty per cent of women with advanced stage or recurrent GCT will die from it. While the pain of his own wife’s death will never completely go away, it has not stopped Crosley’s determination to find ways—and eventually solutions—to better treat the disease.

His journey to understanding began when Sladjana was still alive and fighting the rare cancer. Together they formed the Granulosa Cell Tumour Research Foundation to help raise money for research, while at the same time travelling around the world to participate in clinical trials hoping that she might recover.

After Sladjana’s death at the age of 58, Crosley found his desire to learn about the disease had not lessened. He enrolled at the University of Alberta as an undergraduate in 2010, determined to fill the gaps in his knowledge.

Over time, Crosley found success in his courses and enrolled in an oncology class taught by Mary Hitt in the Department of Oncology. That led to conversations over treatment therapies, which in turn led to Crosley volunteering in Hitt’s research lab in 2012.

I still can’t believe that Dr. Hitt let me into the lab,” Crosley explains with a laugh. “The first time I went into the tissue culture room, which is where you deal with the cells in a dish, the research technician said, ‘Go ahead and split the cells.’ It’s a very simple procedure but it took me like a half a day to do it.”

For Hitt, Crosley’s dedication and commitment has proven inspiring. “I think Powel is a man with a mission. It’s wonderful,” she said, adding that it’s commendable her student continues to educate himself. “In fact, I think it would be great if other people that are involved in different funding agencies would try it out and see what it’s like in the lab. I think it could really open some eyes for a number of people to see how much effort lab personnel put into their work.”

The resulting partnership has proven fruitful.

Since joining the research team, Crosley has privately donated upwards of $20,000 to his foundation, to be directed to Hitt’s ongoing work around GCT. That research has now led to a two-year grant worth $50,000 from the Women and Children’s Health Research Institute to help continue the work of searching for better treatment options.

The next challenge for the research team goes beyond money.

What are needed are live tissue samples of patients who have GCT in order to test the team’s work. “Before trying a new drug treatment out on people, we need to test it extensively in the lab.” says Hitt. “Live patient samples are a step away from patients, and so it’s really good to be able to do that.” Crosley adds, “Then we have a more concrete feel for the validity of this treatment and its potential in human trials.”

Because of the rareness of GCT, obtaining the needed tissue samples is not easy. The team will be working with regional ovarian oncologists to raise awareness of the need. As for Crosley, he says if Sladjana were still with him, “she’d be jealous. She enjoyed the research and if she could do this in a lab, she would have truly enjoyed the work.”

Instead, he carries on what they began together, hoping to not only find answers about the disease that took his wife, but also to be a part of the solution.

I can’t imagine finding a better situation to try and do what I want to do.”

More information about GCT and the Granulosa Cell Tumour Research Foundation can be found at gctrf.org.

Finding purpose in the search for answers
Newsroom