Continued exposure would adversely affect the tissue. But what we find with these olfactory or sensory impairments is that when you stop exposure, the sense of smell returns fairly quickly.

In the event of an accidental spill of fluid used during oil sands production, fish would likely smell it and avoid it. 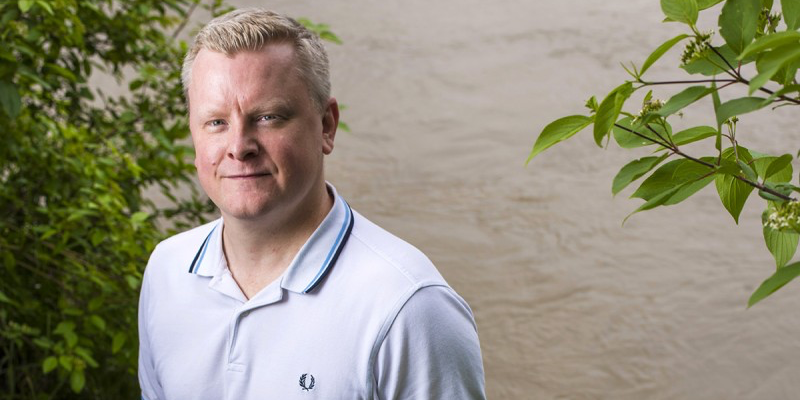 Migratory fish can detect oil-sands process-affected water and will leave an area with no long-term negative effects on their senses, new UAlberta research reveals.

Toxicologist Keith Tierney wanted to find out if, in the event of an accidental spill of oil sands process affected water (OSPW), the fluid produced during oil sands production, would migratory fish be wiped out?

“The answer is most likely not,” he said. “Our data suggests these fish can avoid toxicity by following their sense of smell.”

Tierney and his colleagues exposed the fish to OSPW and followed the effects on the fish's’ olfactory nerves. He said, much like how humans would walk away from a burning building until they were far enough that the smoke doesn’t affect their breathing, so too would fish swim away from a plume of OSPW until the water is diluted enough that toxicity is undetectable.

The OSPW used in the study came from an oil sands site in Alberta, where there is a zero-release policy on industrial water.

“This water just keeps being collected, but if we’re going to keep producing OSPW as we extract oil, eventually the water will be released, whether intentionally or not,” said Tierney.

Taking their study a step further, the team exposed the fish to OSPW treated with ozonation, a process currently being explored as a treatment method to reduce the toxicity of the fluid.

“This mitigation adds evidence that if this fluid is treated, it lowers the effects it has on aquatic life. The question is, if you’re going to release this fluid, what’s a safe level to release it at?”

Tierney said that if the fish couldn’t escape the fluid, it’s likely they would suffer moderate sensory impairment, the longer-term physiological effects of which are unknown.

“Continued exposure would adversely affect the tissue. But what we find with these olfactory or sensory impairments is that when you stop exposure, the sense of smell returns fairly quickly,” he said.

Olfactory neurons in fish, much like in humans, are the only neurons that quickly regenerate, he explained. The hypothesis is that once the water becomes dilute enough, the migratory fish would return to the area with no lingering effects.

“Sensory and Behavioral Responses of a Model Fish to Oil Sands Process-Affected Water with and without Treatment” appeared in the leading environmental science journal Environmental Science & Technology. Fish motion was modelled in 3D with the help of fluid dynamics expert Bruce Sutherland from the Departments of Physics and of Earth & Atmospheric Sciences. The research was conducted through an NSERC Discovery grant to the author and an NSERC industrial chair and Helmholtz-Alberta Initiative to Mohamed Gamal El-Din from the Faculty of Engineering.