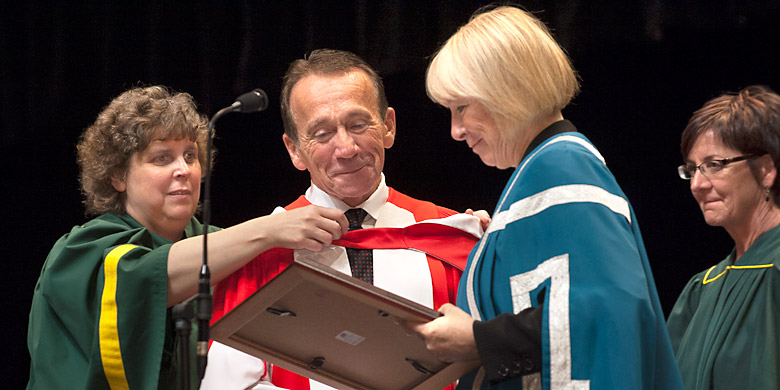 (Edmonton) “Spend your career doing something that you are intensely passionate about—and you will never know if you’re working or playing and never have to work a day in your life.” This was the sage advice John Stanton, founder of the Running Room, offered to graduates at the University of Alberta’s convocation ceremony June 6.

Stanton, who received an honorary doctor of laws degree from the U of A, appears to practise what he preaches.

“When you look at a career, it’s not about the dollars, or the mechanics of the job. It’s about what is going to give you the most satisfaction to say ‘I’ve accomplished something.’” As the face of the Running Room and the author of eight books on running and walking, Stanton can confidently say he has accomplished a lot. He is a fitness icon who has helped motivate hundreds of thousands of people from being couch potatoes to becoming active athletes.

Years ago, Stanton himself was one of those couch potatoes.

In the early 1980s, he was a grocery executive who weighed almost 240 pounds and smoked two packs of cigarettes a day. That all changed when he entered a three-kilometre fun run with his youngest son and struggled to finish. That served as a wake-up call: “I was overweight, I was a smoker and I realized how badly out of shape I had gotten.”

Determined to turn his life around, Stanton began to live a healthier lifestyle, which included running from lamppost to lamppost in the very early morning so his neighbours wouldn’t see him. He quickly shed weight and translated his newfound passion for running into a new business endeavour.

Initially located in an 8-by-10-foot room of an old house shared with a hairdressing shop in downtown Edmonton, the Running Room was meant to be much more than a store; it also served as a meeting place and resource centre for new and recreational runners. It has since grown into a 1,300-employee operation with 110 stores across Canada and the United States, which remains a family-run business today with Stanton and his two sons, John Jr. and Jason, at the helm.

Despite the meteoric growth of his business, he says it wasn’t always easy.

Stanton came home from work one evening during the early years of the business looking unwell. When his wife, Bev, asked him what was wrong, he explained to her that, with recent expansion and slow sales, they were not going to be able to cover payroll for the month—and that they could lose everything.

“We were growing the business. I was not drawing any kind of salary and was living off Bev’s earnings. We had mortgaged our house and maxed our credit cards,” recounts Stanton. “I remember reaching into my pocket and finding $1.57 in it. I told her that was all I had.”

Stanton recalls Bev offering to sell her car to make payroll. “At that point, I realized two things. One, she’s a keeper; and two, success isn’t defined by dollars, but by the people you’ve touched along the way. We have helped people and continue to do that today.”

By promoting the importance of living an active and healthy lifestyle for almost 30 years, Stanton humbly agrees that he has touched many people’s lives and contributed to the University of Alberta’s promise, “the uplifting of the whole people.”

“Well, I’d like to think that we’ve uplifted them off of the couch.”