Robert Church planned to be a farmer, but after a run-in with a truck, he ended up on the road to agricultural and medical revolution. 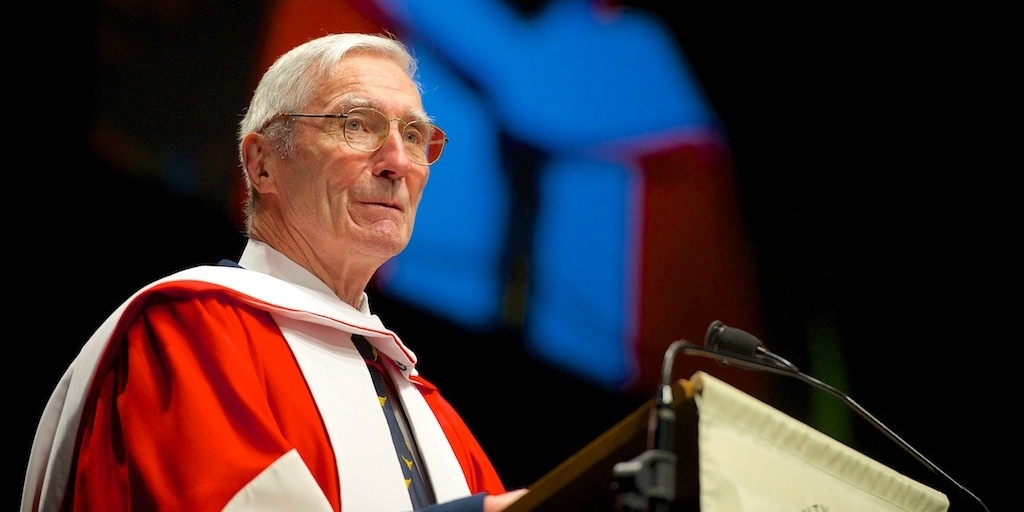 (Edmonton) Of all the things that could have changed the trajectory of Robert Church’s life, he likely would have preferred that it not be a speeding vehicle. But, as the genetics pioneer and recipient of an honorary doctor of science degree told grads at Tuesday’s convocation ceremonies, his plans to become a farmer were altered when he was run over by a truck in high school.

Church’s injuries left him unable to handle the physical rigours of farm work, and his recuperation took a toll on his Grade 12 marks. Accepted to the U of A’s agriculture program on a probationary basis, he had one semester to justify his presence.

“I had no idea of what I was getting into,” Church said. “But shortly after I arrived here, I realized my world had opened to me—the world of ideas and passion.”

Impressed and inspired by the work of contemporaries like David Suzuki and Roy Berg, Church gravitated to the study of reproduction and genetics as a way to explore the mysteries of nature. He would go on to make an incalculable impact on the genetics industry in Alberta and Canada as a researcher and administrator.

“When I graduated from the University of Alberta, I had no idea my interest in cattle and genetics would lead me to where I am today,” Church said. “I came of age during a biotechnology revolution in agriculture and medicine. By following my passion and not saying no to anything that interested me, I became involved in developing new ways to diagnose and treat disease, transferring embryos in cattle, treating infertility in humans, and the production of new plant species by genetic engineering.”

In addition to his work as a researcher and educator, Church was a founding board member of the Natural Sciences and Engineering Research Council (NSERC) and chaired the committees that designed the Networks of Centres of Excellence program and established the Canadian Institutes of Health Research. He also co-chaired the committee that recommended the establishment of Genome Canada. In Alberta, Church worked with Premier Peter Lougheed to establish the Alberta Heritage Foundation for Medical Research in 1980.

Church augmented his advice to grads that they follow their “24/7 passion” by encouraging them to be bold, adaptable in the face of change and curious about other people.

“Remember when following your passion that you are part of a broader community, and we all have an obligation to the betterment of future generations both in this province and worldwide,” he said. “In the past 100 years, Alberta has achieved a great deal. It is imperative that we continue to work together to maintain our prosperity, international standing and reputation as a place of innovation and resourcefulness.”