Following the music of the soul 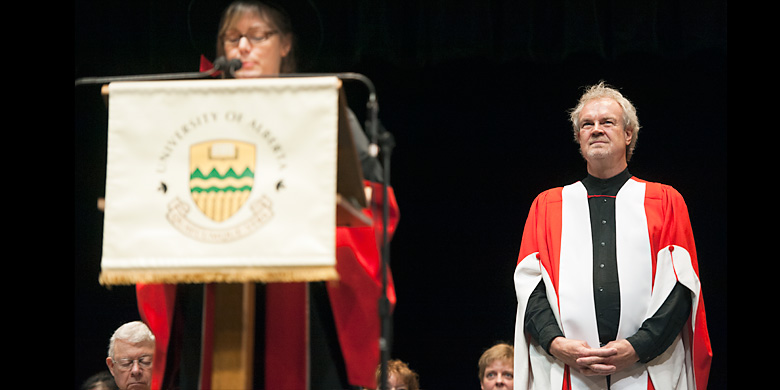 (Edmonton) Two visionary University of Alberta students had a dream 85 years ago that is today an important pillar on which communities and culture in Alberta are being built, said honorary degree recipient Holger Petersen during his convocation speech June 13.

The students simply wanted to create a medium to share university lectures, poetry and sports, but today the province is left with a unique cultural icon, Peterson said.

“That should be inspiring to graduates, to know that two engineering students started CKUA at the power plant building at the U of A. Public broadcasting started in Canada at the U of A in 1927. No other province has what Alberta has in CKUA.”

Petersen has been playing a role in keeping alive CKUA, where for more than four decades he has been hosting Natch’l Blues, the country’s longest-running radio blues program. The veteran broadcaster said receiving an honorary doctor of letters degree from the U of A was a humbling experience.

“I feel it’s not only an honour for me, but also recognition for the music, the people and the organizations that have inspired my life and my work,” he said. “I’m proud of the connections that exist between the U of A and CKUA. When I reflect upon the opportunities I’ve been given, that have shaped my love of music and my career pursuing that love, I always recall that it started with CKUA.”

Petersen was 19 when he walked through the doors at CKUA. And 42 years later, he’s still walking through those doors. He started as a volunteer, contributing interviews with musicians such as Bo Diddley. Today he’s an announcer and producer of one of the station’s flagship programs. He told the audience of more than 600 graduating students from the Faculty of Arts, their families and friends that his experience at CKUA is an example of a key value of public radio.

“At CKUA I found two things that have always remained crucial for me: a community and an opportunity to collaborate,” he said. “Public radio—CKUA, the CBC, which I’m also very grateful to, and CJSR—support the arts and encourage a sense of community. It’s where new ideas, new music and diverse opinions are heard. Public radio is something we should never take for granted—these stations deserve our ongoing support.”

The station is also a foundation on which he now creates opportunities to develop the arts in Alberta through an independent roots and blues music label, Stony Plain Records. Urging graduands to focus on their life’s passions, Petersen shared his experiences in creating the company.

“You don’t necessarily think in terms of a career when you first start doing what you love,” he said. “It was mostly a one-man operation at the beginning and there were a few times when I was ready to pack it in. I was barely surviving financially, but luckily that never seemed to be very important. It wasn’t until 12 years after starting the company that Stony Plain had some success.”

“When you love doing something, and you’re motivated, those first years aren’t a hardship if you’re not initially successful,” Petersen said. “I suspect all of you graduates in this room have a passion for what you’ve spent these many years studying. That passion is in your soul and it feels great to be connected to it.”

Petersen seized the opportunity at the radio station to help develop another cultural legacy in Edmonton. Being around like-minded people at CKUA led him to become a founding member and artistic director of the Edmonton Folk Music Festival.

His contributions to the arts led to Petersen been named a member of the Order of Canada in 2003.

He says his heroes are the blues musicians he works with, who play music because they have to do it, not for financial rewards. “I highly recommend you find your own heroes in your life and continually honour them,” he says.

“If there is one simple piece of business advice I want to pass along, it’s ‘Keep a lot of irons in the fire.’ Perhaps your passion isn’t something that will become your career. I certainly didn’t expect my love of roots music to become my career.”

Petersen urged graduands to find the path in life that works and follow it, keeping a positive attitude while avoiding unmanageable debt. He also praised them for their hard work, dedication and sacrifices.

“It is inspiring to know that—as corny as it sounds—all of you will be changing the world in your own way. Like those two fellow students many years ago who were the first to start public broadcasting in Canada, with a budget of $700.”

Following the music of the soul
Newsroom