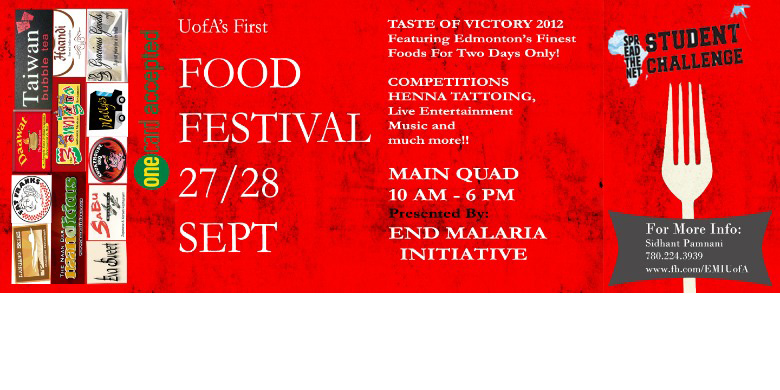 (Edmonton) The global fight against malaria is coming to the University of Alberta, and you can do your part with a fork and healthy appetite.

The Taste of Victory Food Festival will be held Sept. 27 and 28 in the Quad featuring a dozen restaurants serving culinary creations to the masses, in addition to music, entertainment and even a banana-eating contest. Proceeds from the event will go toward the U of A’s entry into Rick Mercer’s Spread the Net student challenge to fight malaria.

“We want to bring people together on campus like they’ve never been brought before, engaging and uniting everyone for a good cause,” said Mary Solomon, president of the End Malaria Initiative (EMI), a student group that’s spearheading the two-day festival. “We want to show Edmonton and the entire nation that the U of A is a community of active, global citizens who are caring and can come together.”

Solomon, a third-year bachelor of science student, founded EMI in February 2011 after visiting her native Nigeria and seeing first-hand the public health toll that malaria wreaks on the population there, and in other tropical and subtropical countries. The organization was recognized as an official U of A student group earlier this year and now has more than 200 people on its contact list to help in the fight against the mosquito-transmitted disease, which kills more than one million globally with 300 to 500 million cases a year.

“It’s 100 per cent treatable and preventable and we have the resources; it’s just about getting those resources out to the people,” Solomon said.

EMI partners with not-for-profit organizations to raise funds to help fight against malaria. This year, the group entered Mercer’s challenge, which pits teams of Canadian post-secondary students in a nationwide fundraising competition to raise money to donate mosquito nets to countries in sub-Saharan Africa.

Sidhant Pamnani, a fourth-year bachelor of science student and EMI’s vice-president of fundraising, said Taste of Victory is Alberta’s first food festival organized by students. Food vendors such as 3 Amigos, Smokehouse BBQ, Eva Sweet, Haandi and Sabu Sushi will represent a world of flavours and will be donating a portion of sales to EMI.

The event will also feature several competitions, dance performances by the Indian Students’ Association and other student groups, individual student performances and an open-stage opportunity for students to show a talent or share an idea. One of the highlights will be a banana-eating contest, which organizers point out is healthier and more sustainable than a traditional hotdog chow fest.

“Even though it’s a fundraiser, it has to be something students can engage with and have a good time,” Pamnani said.

Food vendor tickets will cost $1 and can be purchased with U of A ONEcards or cash. Menu items range in cost from $1 to $10. EMI will also accept cash donations with tax-deductible receipts available.

The festival runs from 10 a.m to 6 p.m. both days and is open to the general public.

To learn more about the festival, including a chance to win a $25 food vendor voucher, visit the
End Malaria Initiative on Facebook.