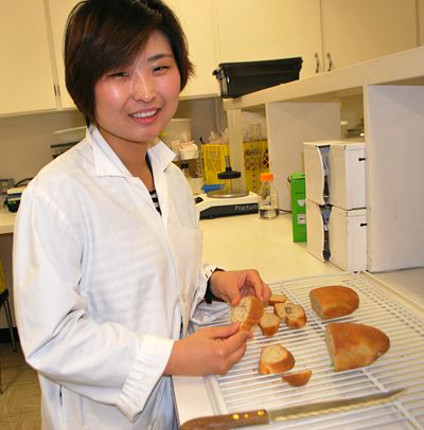 PhD student Cindy Zhao bakes up some savoury sourdough bread with half the salt.

Sourdough made from specific bacteria does the trick. 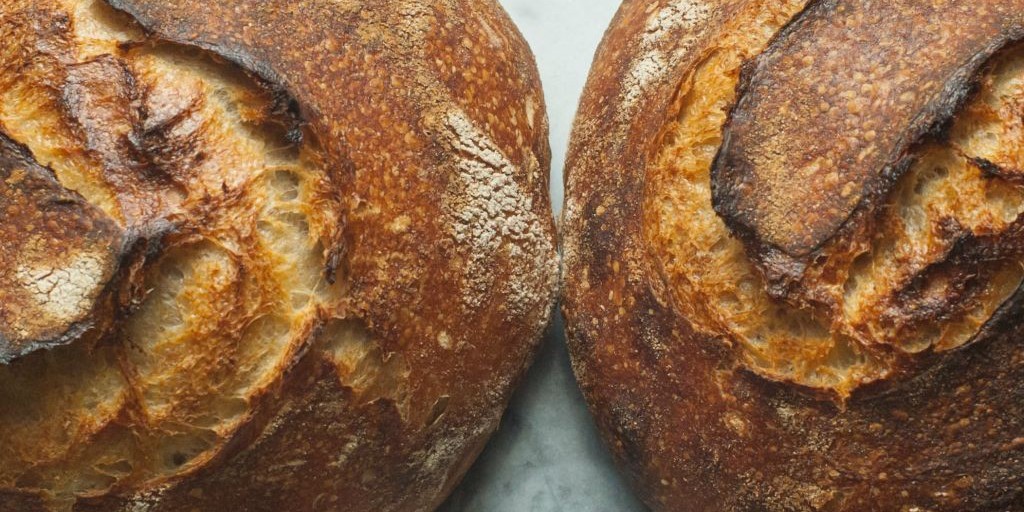 UAlberta researchers discovered that adding bacteria that produce glutamate reduces salt in bread by half without compromising its taste or texture. The discovery may lead to producing other breads without too much salt or sugar. (Photo: Shawn Hoke; shared under Creative Commons licence)

(Edmonton) Three food science researchers at the University of Alberta have discovered how to reduce salt in bread by half without compromising its taste or texture.

The trick is to add bacteria that produce a taste compound called glutamate, revealed Michael Gänzle, a food microbiologist in the Faculty of Agricultural, Life and Environmental Sciences.

The bread, known as sourdough because it’s been fermented with lactic acid bacteria, will have a savoury taste. Its other taste compounds, including bitter, sweet and sour, will harmonize nicely.

“Therefore, if you take the salt away, you still have a well-balanced taste,” said Gänzle.

In fact, his team found it’s possible to reduce salt levels from two to one per cent without harming the taste or texture of the bread.

Sourdough has long been considered the gold standard by bakers and consumers for fine-tasting and textured bread, although different bakers use different bacteria. What this research did was pinpoint exactly which bacteria produce glutamate that gives bread a savoury taste.

By comparing two strains of Lactobacillus reuteri that differ only with respect to glutamate accumulation, Gänzle and fellow researchers Wendy Wismer, an expert in sensory and consumer science, and Cindy Zhao, a PhD candidate in food microbiology, made the link that had been long suspected but not proven: the product of bacterial fermentation that produces savoury taste is glutamate.

The team’s second breakthrough—on salt reduction—occurred because they asked untrained tasters to describe the differences between bread with glutamates and without.

“What consumers told us is that there is a difference when there’s glutamate present, and if the glutamate is present they thought the intensity of the salty taste is higher,” said Gänzle. “That confused us, because glutamate is a savoury taste, not a salty one.”

So Zhao went to Switzerland and worked with a panel of trained tasters who can discriminate and measure minute differences in taste. They discovered that sourdough with the same salt levels as regular bread actually tasted saltier.

“So it means that the sourdough bread with glutamates does enhance the salty, because it tasted saltier,” said Zhao.

Therefore, reducing the salt would not unduly affect the taste. As for the texture, it was maintained because the sourdough can decrease the pH and also produce the sugar residues that contribute to the texture.

For consumers, the research means they can have healthier bread without sacrificing taste or texture. A bread industry firm in Europe is now testing the L. reuteri bacteria for that purpose.

Meanwhile, Zhao is conducting more research on L .reuteri and the ability of sourdough bacteria to produce taste-active peptides, including recently discovered peptides with taste-enhancing properties called “kokumi.” Its properties may allow her to bake bread with further improved taste.

“The work on peptides will help us to better understand how to make tasty bread without adding too much salt or sugar,” she said.