Golden Bears' football home opener highlights exciting new season of athletics—and students get to enjoy it all for free. 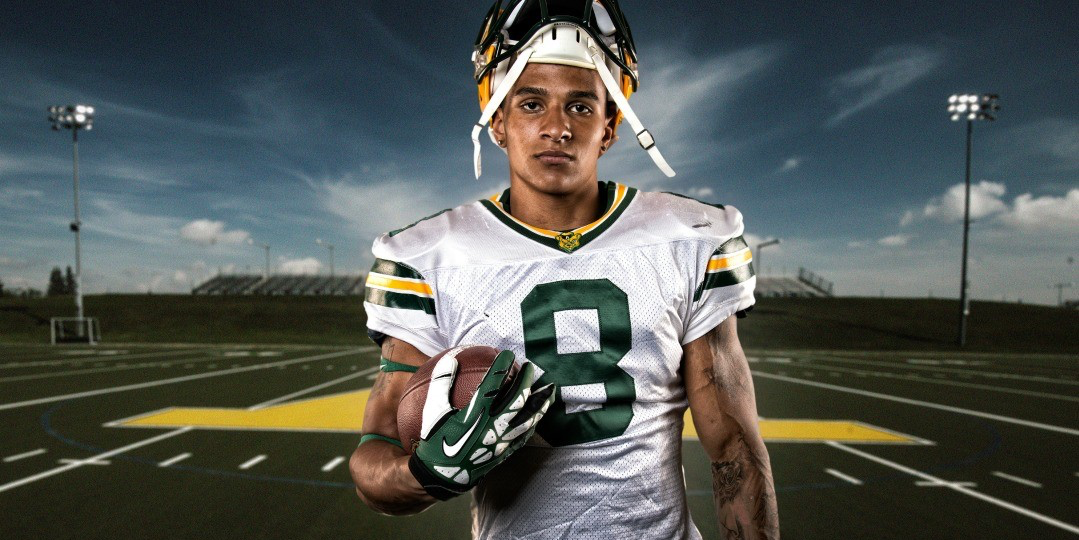 The Golden Bears take to Foote Field Sept. 13 for their home opener in a sports season that students can enjoy with free admission all year long.

(Edmonton) The University of Alberta Golden Bears football team will host the Saskatchewan Huskies at Foote Field in their 2014 home opener this Saturday, Sept. 13. Kickoff is 5 p.m. between the Bears and Huskies, and the Bears will be in the hunt for their first victory of the year, and first since the 2011 season.

Free admission for students all season

Although Alberta was credited with a pair of wins in 2011, due to UBC using an ineligible player all season, the Bears haven’t won a game through 60 minutes of play since 2010. In fact, Alberta’s last victory, in November of 2010, came at the expense of the Saskatchewan Huskies. That season, the Bears finished 3-5 in the regular season but advanced to the playoffs, where they met the first-place Huskies (6-2) in Saskatoon. Despite falling behind 30–3 through three quarters of play, Alberta staged an epic comeback, scoring 28 unanswered points to shock Saskatchewan 31–30 and advance to the Hardy Cup final in Calgary.

Since then, the Bears have struggled to get back into the win column, including consecutive 0-8 seasons in 2012 and 2013.

Looking for a turnaround year

A turnaround season is expected in 2014, but it won’t come easily in Canada West. In fact, the Bears got a strong dose of reality in their season-opening contest, a 71–3 loss against the six-time defending Canada West champion Calgary Dinos in Calgary.

Now they’ll return home to the friendly confines of Foote Field to host the Saskatchewan Huskies, a team that posted a 44–24 win in their season opener against the Manitoba Bisons in Saskatoon.

Alberta struggled mightily in their opener, but one bright spot on offence was the hard running of third-year running back Joel Mukendi. The Physical Education and Recreation student-athlete, who was born in Kinshasa, Congo, and previously played for the Kamloops Broncos, accumulated 97 yards on 14 touches against the Dinos, good enough for a 6.9 yards per carry average, and the leading rusher status in the conference through week one.

Freshman kicker Vu Ndhlovu connected on one of two field goal attempts in his CIS debut last week, splitting the uprights from 42 yards out for Alberta’s only points. He also managed a 35.5-yard punt average, including a 50-yard punt.

All three facets of Alberta’s game will need to come up a level this week against the Huskies, and they’ll need to cut down on their penalties and mistakes. Early fumbles put them in a hole against Calgary, and they were flagged 15 times for 139 penalty yards against.

Saskatchewan quarterback Drew Burko threw for 233 yards and four touchdowns against Manitoba last week, while running back Shane Buchanan rolled up 88 yards along the ground. They’ll bring what looks like a balanced offence to Edmonton, one that picked up 428 total yards, including 233 through the air and 195 on the turf.

The Huskies also had some success on the defensive side of the ball, recording three interceptions and three sacks against the Bisons.

However, the Huskies did yield 335 passing yards against in their first game. Alberta had the 10th most productive offence last season, in terms of yards, and virtually everyone from that offence returns this year. Fifth-year quarterback Ryan Schwartz directs the offence, while returning receivers Tylor Henry, who led the conference in receiving yards last season, Adam Zajdel, Aundrey Webster and fifth-year Ryley Richardson are the playmakers, along with running backs Ed Ilnicki and Joel Mukendi. First-year Golden Bear wide receiver Jimmy Ralph is a legitimate threat on offence as well.