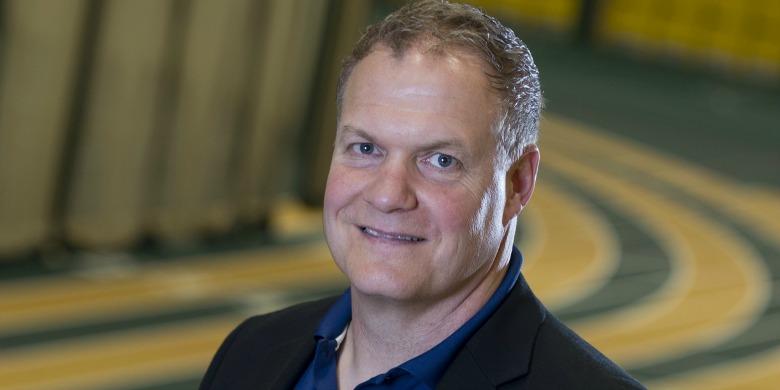 120917-alumni-blakedermott-banner
Blake Dermott, who is being inducted to the university's Sports Wall of Fame during Alumni Weekend Sept. 20 to 23, credits the relationships he built at the U of A for his success on and off the field.

(Edmonton) Former University of Alberta Golden Bear Blake Dermott is used to fans cheering his name after an all-star athletics career that saw him ascend to CIS titles in football and wrestling, and two Grey Cups in the Canadian Football League.

When Dermott (‘84 B.Ed.) accepts his latest honour—induction to the U of A’s Sports Wall of Fame during this weekend’s Alumni Recognition Awards—he hopes to have another large crowd on hand, only this time he plans on doing the cheering. He invited 70 former coaches, Golden Bears and Eskimos teammates and friends so he can personally thank them for having a hand in his career in football and athletics.

“I never would have had the success that I did or play as long as I did without their influence,” said Dermott, who played four seasons with the Golden Bears before embarking on a 14-year career as an offensive tackle with the Edmonton Eskimos.

“They are so many good teachers, coaches who helped shape my life. When you reach high-school age, you may see them more than your parents—they become a very pivotal part in your development of who you become.”

Dermott knows from experience, on both sides of the field. A few years after retiring from the Eskimos in 1996, he became a role model for kids as a coach of the Salisbury Composite High School Sabres in Sherwood Park. He started coaching when his son Brock was 10 years old and followed him throughout high school; now that Brock is a teacher and coach at the school, the pair patrols the sidelines together.

Dermott, who works full-time as an account executive for the Edmonton-based graphic design and printing firm Cowan Graphics Inc., credits his time and relationships forged at the U of A for success on and off the field, and for passing the torch to the next generation.

“The U of A gave me the educational training that has allowed me to develop a career after football,” he said. “I learned an awful lot about the skills you need to be successful—teamwork, critical thinking and the ability to adapt to different situations.”

Being added to an illustrious group of athletes on the U of A’s Sports Wall of Fame is an honour that brings back a flood of fond memories, including being prodded by former Bears coach and fellow Sports Wall of Fame inductee John Barry to try out for the wrestling team. Although he had some doubts initially, Dermott proved a force on the mat, winning a gold medal at the 1982 CIS Wrestling Championships and even competing in Japan with the team.

On the football field, Dermott was a two-time Canada West all-star and his Golden Bears team won it all with the 1980 Vanier Cup. It’s a time—and those are relationships—that he says he’ll always cherish.

“When you win a championship, when you go to battle with someone every day, you have a bond that’s closer to being a brother than a teammate.”