A week into her physiotherapy clinical placement, Kimba Meagher didn’t expect to be helping to evacuate patients – including a resident cat and bird – from the Northern Lights Regional Health Centre in Fort McMurray. 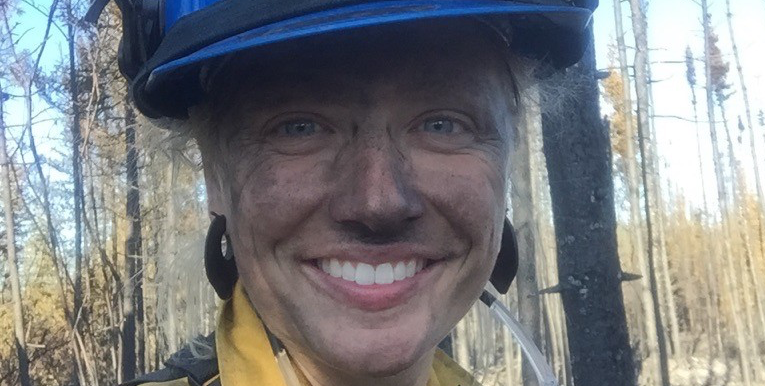 Kimba Meagher, MSc Physical Therapy student, is shown here in photo taken when she worked as a forest firefighter for the past three summers. (Photo supplied).

A week into her physiotherapy clinical placement, Kimba Meagher didn’t expect to be helping to evacuate patients – including a resident cat and bird – from the Northern Lights Regional Health Centre in Fort McMurray.

But that is exactly what the University of Alberta student found herself doing last Tuesday afternoon, as a devastating fire roared through the city and forced a total evacuation of the community, including its only hospital.

“All the staff came together to evacuate the patients and we were able to keep everyone safe, including Cleo, the hospital cat,” said Meagher.

Originally from Fort McMurray, Meagher, an MSc Physical Therapy student from the Faculty of Rehabilitation Medicine, is no stranger to fires – she previously worked for three summers as a forest firefighter.

“By lunchtime that day, we started to see billows of smoke,” she said.

With the fire approaching and growing in intensity, hospital staff began moving patients to a common area, where they waited for buses to arrive.

The initial concern from staff was for patients with chronic respiratory disease that may have trouble breathing the thick air. Patients in surgery and maternity were also moved first.

Meagher said hospital staff had to work together to ensure that patients were safe and accounted for throughout the evacuation.

“I knew this summer was going to be really bad, but I didn’t consider it could occur in a community, let alone my own community,” she said.

After leaving the hospital, Meagher went to City Hall to join her brother and dad, who works as a city councillor.

Shortly afterward, they met up with her mom and other brother.

“Thankfully everyone was safe,” said Meagher, “but we don’t know whether our house is still intact.”

Besides the house she may or may not have lost, Meagher also had her time at the hospital cut short.

“I loved my experience and the week and a half I got out of it. I wish I was able to finish my placement there,” she said.

Fortunately, Meagher may still be able to reconnect with patients she was caring for before the fire. She is currently looking at spending the last four weeks of her placement at the University Hospital, where many Fort McMurray patients were sent.

“I would love to see them and make sure they’re doing OK,” she said.

Nicole Kother, another U of A physical therapy student who was on placement in Fort McMurray, is also safe and here in Edmonton.

A fundraiser BBQ will held by the U of A today in the Quad from 11 a.m. to 1:30 p.m. Anyone who wishes to help the residents of Fort McMurray can refer to the post on The Quad for list of items for donation and further updates.

The U of A is now hosting more than 1,000 people in student residences, and all remaining space will be used to help co-ordinate longer-term housing needs identified through the City of Edmonton’s emergency reception centre located at Edmonton Northlands.

“We are glad that our students are safe and sound and are tremendously proud of their efforts," said Bob Haennel, interim dean of the Faculty of Rehabilitation Medicine. “We continue to keep the residents of Fort McMurray in our thoughts.”