Former chancellor devoted himself to 'the right to be different'

Fluent in five languages, Peter Savaryn was a champion of Ukrainian culture as part of Canada’s multicultural identity. 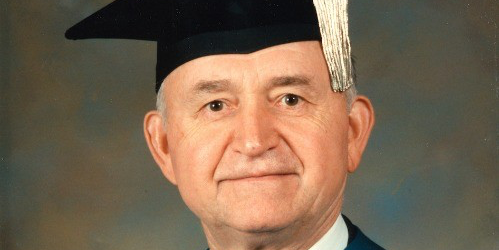 Peter Savaryn, who passed away April 6, served as the University of Alberta's 12th chancellor from 1982 to 1986.

In 1949, after growing up in Ukraine and enduring the hardships of Russian occupation, 22-year-old Peter Savaryn followed in the footsteps of thousands of Europeans and boarded a ship destined for Canada.

He seized upon the opportunities his new country offered, eventually becoming a lawyer and championing multiculturalism and education during an accomplished career in which he was, among other things, chancellor of the University of Alberta from 1982 to 1986. Savaryn died last week at the age of 90.

“Peter Savaryn exemplified the best in public service,” said U of A president David Turpin. “He had an irresistible optimism and compassion for others. Through his leadership and service to the Ukrainian-Canadian community, to many organizations in Alberta and Canada, and to our university as chancellor, he built many important legacies, including the renowned Canadian Institute of Ukrainian Studies in the Faculty of Arts.”

Upon his arrival in Halifax, he made his way to Ontario where he worked on a farm before moving to Edmonton where he toiled as a labourer and carpenter. In 1951, he married the love of his life, Olya, and began his studies at the U of A, graduating with a bachelor of arts in 1955 and a bachelor of law a year later. He established his own law practice in 1959.

Besides Ukrainian, Savaryn spoke German, Polish and Russian. English would come in time, as would a lifetime dedicated to fulfilling the multicultural promise of his adopted home.

A force for multiculturalism

The young lawyer made his first foray into activism when he successfully helped lobby the provincial government to introduce Ukrainian language classes in Alberta high schools and at the U of A.

A decade later, Savaryn figured prominently in a campaign that inspired Prime Minister Pierre Trudeau’s 1971 proclamation that Canada was a multicultural nation. This policy paved the way for, among other things, the establishment of bilingual schools and, with Savaryn’s help, the creation of the Ukrainian Cultural Heritage Village provincial museum.

The U of A began to play a more pivotal role in his life in 1972 when he began his service to the university as a member of the board of governors and senate.

It was as a board member that Savaryn advocated for the U of A to be named the institutional home for Ukrainian scholarship in Canada. Although other sites were considered, Savaryn’s persuasiveness won the day, and in 1976 the U of A opened the Canadian Institute of Ukrainian Studies.

An advocate for education

In 1982, Savaryn was elected as the 12th chancellor of the U of A. During his installation address, he humbly accepted the honour, expressed his gratitude and his duty to his alma mater and outlined the primary goal of his tenure—advancing education.

“(Education) is not a vaccine against pain, grief and loss. It can, however, give us the necessary strength to survive such misfortunes without losing faith in life and in one’s fellow human beings.”

He added, “Nothing is so costly as ignorance, and nothing, by comparison, is as cheap as knowledge.”

Savaryn also implored Canadian universities to take care that what is taught is broad enough to encompass more than the two founding nations.

“Seventy per cent of Canada's territory west of Ontario is inhabited by about eight million people, and the origins of the majority of them are neither British nor French. They are taxpaying, law-abiding, good citizens. They claim recognition, but they claim even more the right to be ‘different’—that is, to be themselves. The universities need to take more note of that when developing curriculum and providing facilities.”

Honouring a heritage, preserving a culture

He chaired the World Congress of Free Ukrainians and was a founder of the Alberta Cultural Heritage Council.

He also had involvement in the Progressive Conservative Party of Alberta, Alberta Multiculturalism Commission, Plast Ukrainian Scouting Organization, Bishop Budka Charitable Society and Ivan Franko School of Ukrainian Studies, as well as numerous other Ukrainian and Canadian community organizations in Alberta and Canada.

In 1987, Savaryn received an honorary doctor of laws degree from his alma mater and was named to the Order of Canada.

In 1996, the Canadian Foundation for Ukrainian Studies created the Peter Savaryn Award for Contributions to the Development of Ukrainian Studies. During the presentation of the award, Olya generously matched its value with a personal donation, creating the Peter and Olya Savaryn Award. The award supports a range of scholarly and educational projects at CIUS, such as providing grants to scholars, organizing public events and supporting publications and translations in Ukrainian studies.

—With notes from the Canadian Institute of Ukrainian Studies and Folio

Former chancellor devoted himself to 'the right to be different'
Newsroom