Michelle Parsons quit her job in the correctional system to finish her nursing degree. Now she wants to return to help women gain better access to reproductive health care. 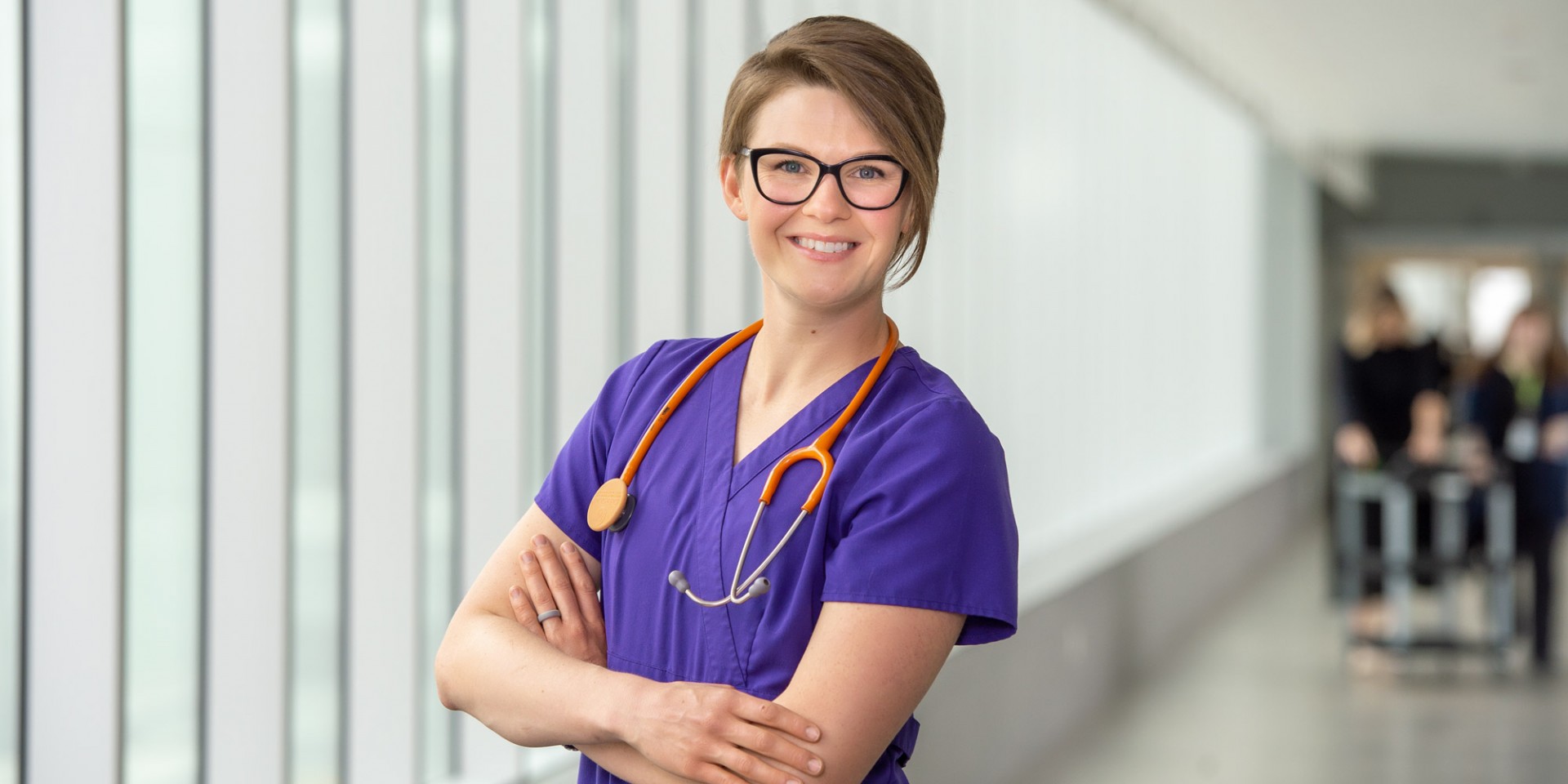 As a nurse, Michelle Parsons hopes to help female inmates in ways she couldn’t when she was a corrections officer. (Photo: Richard Siemens)

Ask University of Alberta graduate Michelle Parsons how she felt about the women she guarded while working as a correctional officer, and tears come to her eyes.

“I would just see the pain some of them had, the insecurity they had. They could be grown women, but their souls were a bit lost.”

Parsons, who graduated June 5 from the honors program in the Faculty of Nursing with a bachelor’s degree, quit her job at the Fort Saskatchewan Correctional Centre in 2017 to keep up with her final year of studies, but she didn’t forget about the women she’d seen behind bars day in and day out.

“There are some I continually think about and I wonder where they are in this world.”

It’s that thought that has Parsons hoping to return to the correctional system as a nurse to help women access support for their reproductive health care—an area where she saw wrenching need during her three years working as a corrections officer in a medium-security facility.

“I would see women leave, go back out into the community and months later, they’d be back. They’d be pregnant or find out they were pregnant,” she said.

One woman found herself in that situation twice, with her babies being surrendered to child services authorities both times. Parsons was puzzled and disturbed by an apparent gap in services, and believed more could be done.

“I knew there were avenues in the facility the women could take to get education, access birth control and get their health checked, but it was obvious they weren’t accessing the available resources. I wanted to know where the breakdown was,” she said.

Her quest to find out became the heart of a small research project in her last year of studies, and along the way, helped her find her calling as a nurse.

“I found my place and it feels good.”

Finding a place—and a purpose

After graduating from high school, Parsons knew she wanted to work in the medical field somehow, but her marks weren’t high enough and her single-parent family didn’t have the money to enrol her in post-secondary education. So she followed a friend into the Canadian forces and became a medical technician. She liked the work but found herself wanting less structure.

“Your day was planned for you; you don’t get to make decisions for yourself and your career,” she said.

She left the forces and enrolled at the U of A, but knew she’d also have to find work to pay the bills. Her husband, who’d served in the military with her, was already working as a corrections officer and suggested she do the same, since she had a similar background. She applied and began working part-time in 2014 at the Fort Saskatchewan facility. She hadn’t expected there’d be crossover between her job and studies, but surprisingly, it helped her find her way. Even as she studied nursing, she was unsure whether it was the right career for her.

“I didn’t know where my place would be in the nursing world. I always felt like I didn’t quite fit in anyplace,” she explained.

All that changed when she saw the gap between the women and the available services that could help empower their choices for reproductive health as they moved back into the community after incarceration.

“I had my light bulb moment. I wanted to find out what the perceived barriers were. What is stopping them?”

To discover the disconnection, Parsons conducted research over two years as part of her studies by interviewing a handful of female inmates, collecting data and developing recommendations to improve the situation.

She found that all of the women she interviewed had experienced unplanned pregnancies, which mirrored statistics she found in a study from the American Journal of Public Health, showing that 83.4 per cent of pregnancies for women behind bars were unplanned.

“It’s an unfathomable number compared to the general public,” she said.

While interviewing her study subjects, she was struck by the “chaotic life circumstances” they faced once they left the corrections system. They were weighed down by histories of abuse, neglect, drug and alcohol use, and peer pressure to have unprotected sex. “Some of them have been dealt a bad hand in life.”

They told Parsons they didn’t see the resources available to them in prison as a fit for their lives.

“You can’t ask a woman to take a birth control pill every day if she’s not able to stay sober, or to make regular medical appointments for birth control devices if they don’t know where they’ll be living in three months,” explained Parsons.

“They couldn’t make their health a priority,” she said, adding they focused on surviving—finding housing and money and struggling to support their addictions.

Advocating for more options for women

Parsons also found administrative barriers: long waiting lists for appointments meant women were usually released from jail before they were able to meet with a health-care professional.

Parsons recommended women be screened for pregnancy as soon as they enter the correctional system, so prenatal care can start right away and they get an opportunity to talk about birth control options available to them. The government should also consider offering a larger selection of long-term contraceptives, because pills are a poor fit for their lifestyle. Currently, the system provides copper intrauterine devices to women who want them, but there are similar products preferred by health-care providers that have fewer side-effects, Parsons noted.

As a nurse, she hopes to help female inmates in ways she simply couldn’t think about when she was a guard.

“As a corrections officer, you’re firstly concerned about your safety, the people on your unit, to keep care, custody and control. The rules are black and white and you follow them.”

As her nursing studies progressed, it was a struggle to maintain that boundary, she said.

“I’m a people person. I want to get to know people, and nursing looks at the whole person: where they come from, their education, their background,” she said.

Ultimately, she sees herself working in a women’s health clinic in the remand system, and hopes to continue to conduct research that can give women inmates more control over their reproductive health.