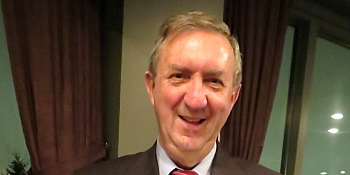 Thomas Marrie, former dean of medicine at UAlberta, holds the Bulyea Cup. Marrie received the award from the School of Dentistry at a special reception Nov. 19.

(Edmonton) A former dean of medicine at the University of Alberta has received the School of Dentistry’s highest award for excellence.

Thomas Marrie, who chaired the Department of Medicine from 1999 to 2004 and served as dean of the Faculty of Medicine & Dentistry from 2004 to 2009, received the Bulyea Cup at a reception Nov. 19.

During his time as dean of medicine at the U of A, Marrie made several major accomplishments for the School of Dentistry. He worked selflessly in helping the government understand the importance of dental and dental hygiene education. He guided the process of preparing a critical report that was presented to government and established a partnership with key people in the Ministry of Advanced Education and Technology.

The report, and his unwavering support, formed the basis of a strong platform the school has been able to build on over the years. Marrie also played a large role in securing the clinic, research and faculty administration spaces the school enjoys today.

After his decade-long stint at the U of A, Marrie returned to his roots at Dalhousie University, where he has served as dean of the Faculty of Medicine since 2009.