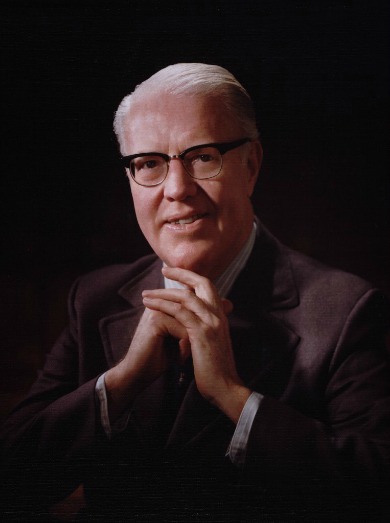 (Edmonton) On the eve of kicking off centennial festivities at Alumni Weekend, the University of Alberta medical school celebrates another history-making moment: the Canadian Medical Hall of Fame inducts the late Walter C. Mackenzie recognizing the former dean as a visionary health leader and builder of academic health science.

“To have this honour bestowed on a former dean on the week when many of his former students are gathering for a major celebration is serendipitous,” said D. Douglas Miller, dean of the Faculty of Medicine & Dentistry. “Dr. Mackenzie is best known for setting the bar very high. He expected nothing short of excellence from medical students—a legacy that remains today as our graduates continue to score number one in Canadian medical exams.”

The Canadian Medical Hall of Fame noted that Mackenzie was instrumental in the development of numerous medical and surgical programs during his tenure as dean of medicine. They also credited him for his visionary foresight of academic health centres, recognizing his “pivotal role” in the formation of the provincial organization that funds medical research, formerly known as the Alberta Heritage Foundation for Medical Research. And they recognized him for his research excellence, which led to countless national and international awards.

Mackenzie served in the Second World War, moving to the rank of commander surgeon. Born in 1909 in Glace Bay, Cape Breton, he received his medical degree from Dalhousie University. He then pursued his surgical training at McGill University and the Mayo Clinic before moving to Alberta. He remained a teacher and surgeon throughout his stellar career and is remembered fondly as a true gentleman, scholar and international medical statesman.

During Alumni Weekend, the public will have a rare opportunity to listen to a "Conversation With Four Deans" in the Li Ka Shing Centre for Health Research Innovation. The four leaders in Alberta medicine will address how health care and medical school have changed over the last century, including recognition of how deans such as Walter Mackenzie led the faculty in its formative years.

Mackenzie will be inducted posthumously in Kingston, Ont., on April 24. About 500 academic, health-care and business leaders from across Canada will gather for this evening of celebration, which will also mark the 20th anniversary of the Canadian Medical Hall of Fame.

Established in 1994, the Canadian Medical Hall of Fame is a national charitable organization that fosters future generations of health professionals through the celebration of Canada’s rich medical history, scholarship programs, and the delivery of both local and nationwide education programs for youth. Each year, up to six individuals are recognized for their extraordinary contribution to improving the health of Canadians and people worldwide.