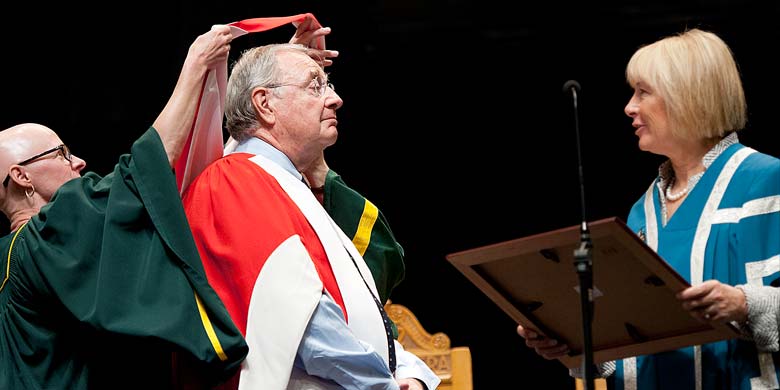 120612-paulmartin-banner
The Right Honourable Paul Martin, who was prime minister of Canada from 2003 to 2006, receives his honorary doctor of laws degree during convocation ceremonies June 11. (Photo: John Ulan)

(Edmonton) The Right Honourable Paul Martin knows a thing or two about budgets. The former prime minister was the Liberal finance minister throughout most of the ‘90s and was responsible for balancing the federal budget after several years of deficits.

Martin’s address to the graduating students of the faculties of education and native studies touched on deficits of a different variety. Martin noted that when he was advised of his honorary doctor of laws degree from the University of Alberta, he asked to speak expressly to this group because of the mutual importance of their future paths.

“I believe your two graduating classes, in so many ways, hold the future of Canada in your hands,” he said. “Let there be no doubt that you will be the catalysts for your country’s progress.”

Recalling a previous visit, Martin touched on a conversation with a group of students from the Faculty of Native Studies and one question posed to him regarding why Canadians still seem to lack understanding of issues that face First Nations peoples. He explained that the reflection of the issues the question holds reveals a fatal flaw in the way Canadians view their history while eliminating the history of the land before the arrival of the Europeans. To truly know ourselves and our country in context, he said, we need to know our history, not the assimilated view that is taught in schools.

“No country can progress until it is prepared to look at itself in the mirror of contemporary social science,” said Martin. “When we teach what Canada is all about, not only must we begin with the earliest known history of this land’s native people, but we must acknowledge what happened after the European contact. And then, looking ahead, we must recognize that it is in this century, in the 21st-century social narrative, the First Nations, the Métis nation and the Inuit are an important part of our future.”

Martin noted that maintaining the cultural mindset of the European narrative holds the country in a cyclical repetition of errors, such as underfunding of schools on First Nations and lower numbers of Aboriginal students at the post-secondary level. Gaps in education cannot be left unattended for any reason, including financial or political. He pointed out that although many young Aboriginal children may suffer for a “want of learning,” some University of Alberta initiatives are leading a force for change.

“With innovative programs like the Aboriginal Teacher Education Program, the Métis Archival Project and the Later Literacy program, clearly the University of Alberta is among the leaders of those who would make change happen,” said Martin. “What the university is doing is the right thing to do because it’s an issue of fundamental morality.”

Martin said the education and development of the country’s human resources must outweigh the drive to capture its natural resources. He challenged the students to live up to the challenges that a global society will place on them and provide the leadership that all citizens of Canada will need from them.

“You are graduates of a great university. And you are now as well equipped as you possibly could be, and what I have raised here today in terms of the challenges before you are imbedded in every single thing that you’ve been taught,” said Martin. “You are going to have the opportunity to mould lives in a way that very few people could. And that’s why I said that the future of Canada, in all of its diversity, is in your hands.

“And I can tell you something—there isn’t one person on this stage who doesn’t envy you for what you’re about to do, including me.”