Accepting an honorary degree from his alma mater, Dave Hancock stresses the value of family and the power of education. 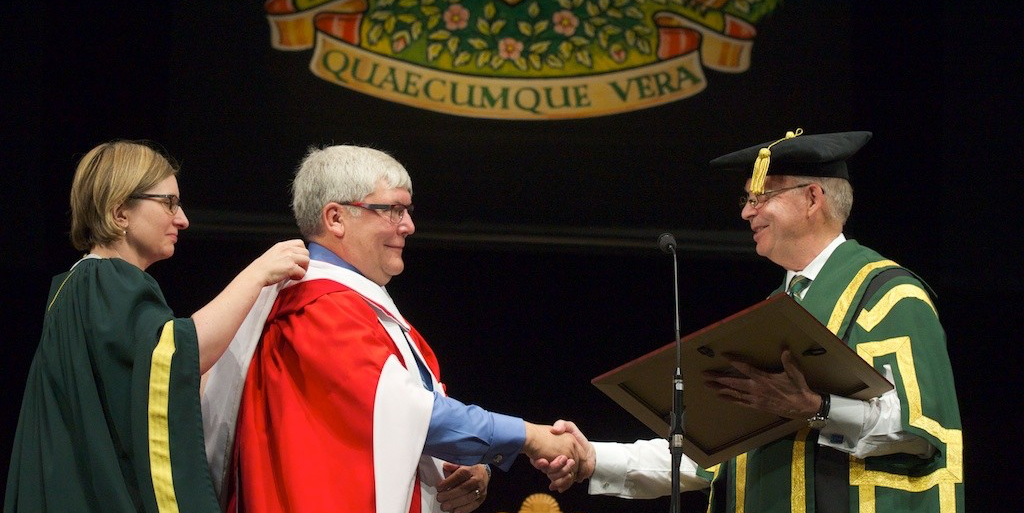 Dave Hancock receives his honorary doctor of laws degree from Chancellor Ralph Young during the convocation ceremony for the faculties of education and law June 3. (Photo: Richard Siemens)

(Edmonton) Family and education have guided the work of Dave Hancock, one of Alberta’s longest-serving and most distinguished politicians, and he hopes University of Alberta graduates can also draw inspiration from those cornerstones as they face their futures.

“The most important factor I have had in any success I have enjoyed is in knowing, understanding and adhering to my core values,” said Hancock, who addressed U of A Faculty of Education and Faculty of Law graduates as he accepted an honorary doctor of laws degree June 3.

“Those values were learned from and shaped by family and by education.”

Hancock, who served Alberta as an MLA, a cabinet minister and the province’s 15th premier before retiring in 2014 after 17 years of service, encouraged the new graduates to contribute to the betterment of society.

“You are joining important professions, enabling you to be effective contributors,” he told the audience. “The rule of law is the basis of civil society. And the education of our young is the very future of our society.”

Success, he added, is not measured by others, but “in knowing that we gave our best,” developing personal potential; overcoming hurdles; forming family, however it is defined; and contributing to community.

A U of A alumnus with degrees in law and political science, Hancock during his career served in key ministerial portfolios including education, innovation and advanced education, and health and wellness, among others. Committed to the social responsibility of government, he championed the need for excellence in all levels of education and helped establish such initiatives as the Lois Hole Campus Alberta Digital Library and the Access to the Future Fund.

His values are guided, he said, by three lessons he learned from his parents, who lived through the Great Depression and headed north to work and then raise a family of seven children in some of Canada’s smallest, poorest Aboriginal communities.

“First, every person has value and deserves to be treated with respect, listened to and honoured. Everyone needs the opportunity to contribute in their own way and to their own capacity.”

Second, Hancock said, collaboration is important. “If we want something done, we have to be prepared to do it, to lead it, to collaborate with others and to inspire others to join and contribute their talents to the shared task. That pioneering spirit—whether it came from the sharing nature of Aboriginal societies or neighbours rallying for a barn-raising—has instilled strength in our communities.”

Third, Hancock said, he deeply values the power of education: developing literacy and numeracy skills, critical thinking “and the pursuit of knowledge for its own sake.” His parents ensured each of their children graduated with a post-secondary education.

In the 21st century, “engaged, ethical and entrepreneurial Albertans must lead in learning and unleash innovation if we are to compete in a global marketplace and ensure that Alberta continues to be the best place to live, to work and to raise our families.”

Pursuit of knowledge will be key to a successful future, he told the graduates. “Our greatest legacy is in leaving behind us a better understanding of our world, better ways of doing things, reducing our impact on the planet,” whether through research, practical application, teaching or mentoring, he said.

Hancock also took an opportunity to thank his family and colleagues for their support over the many years he served in public office.

“It is a very wonderful and humbling feeling to be here today, to accept this honour from my alma mater and to wear it with pride, if it is understood that none of the things that I am being recognized for belong to me alone.”

Hancock credited collaboration with caring, motivated people for shaping his policy work and advocacy for education. He acknowledged his wife and children as his “toughest critics and strongest supporters,” and also thanked the rest of his family, his U of A Phi Gamma Delta fraternity brothers, law partners, volunteers, a “dedicated, passionate staff,” public servants and fellow elected colleagues “who encouraged and supported me, and when they thought necessary, discouraged my directions and actions.”

Proud to receive an honorary degree, Hancock added that he hopes it will inspire others to lives of service, scholarship and community-building, and to be “an active part—not a bystander—in that ‘upward march of humanity.’”