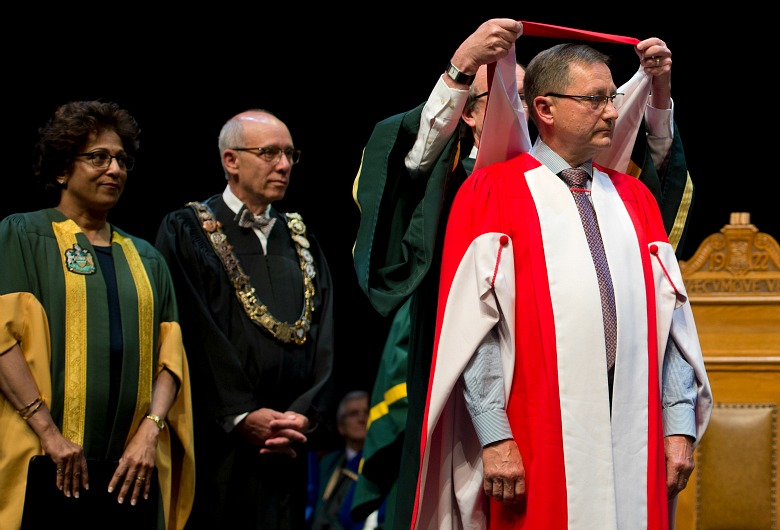 (Edmonton) Years ago, former Alberta premier Ed Stelmach set out to obtain a degree from the University of Alberta. But family tragedy and fate led him down an altogether different yet ultimately rewarding path.

Today, after decades of service to his community and the province, Stelmach was conferred an honorary doctor of laws degree in recognition of his dedication to public service and selfless devotion to making Alberta a better place for all its citizens.

Recalling his grandparents’ immigration to Canada in search of a better life, he pondered on their dreams for their family and mused at the changes that they could not have imagined in their adopted country—including his 19 years in public office and his eventual rise to the highest office in the province.

To the Faculty of Education graduands, he extolled the benefits and responsibilities that come with receiving higher education. Pursuing lifelong learning, seeking truth in all things, and being respectful and open to the views of others is what comes from this education, he said, and must be passed on.

“It is difficult to foretell the influence you will have on your students,” he said. “In many ways, it may last an eternity.”

Stelmach spoke of how his core values were shaped by events early on his life—experiences that taught him the significance and benefit of compassion and volunteerism, and sparked his interest in public service and politics. This, coupled with the need to build solid personal relationships, prefaced his address to faculty, graduands and families in attendance. He encouraged them to rely less on social networking and easy answers through the Internet, and more on face-to-face opportunities and seeking the right answers to the world’s challenges.

Technology is a useful tool, but it should not be the sole source of influence for leaders in any capacity, he noted. The Internet, allowing access to knowledge from and connection with people around the world, should not fully replace well-researched solutions and interpersonal contact with people who both support and change our ideas. Seeking simple answers to complex problems is not the direction to follow, he cautioned, and sometimes the greatest noise does come from empty-minded vessels.

As one who was influenced towards a life in politics by a teacher, he sent clear messages to the recent graduates on the power they will hold in the classroom—and beyond.

“Teach your students to think critically and to grow relationships based on mutual respect,” he said. “You, our people, are our greatest resource.”