Former U of A chancellor honoured for Aboriginal advocacy 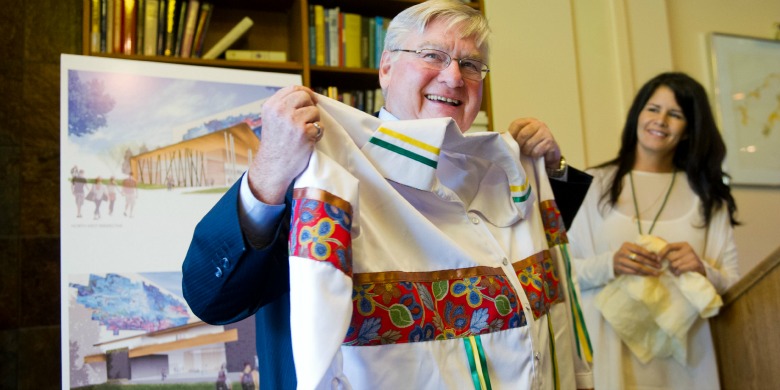 120925-ericnewell-banner
Wearing his dedication on his sleeve: U of A chancellor emeritus Eric Newell receives a ribbon shirt from Tracy Bear (right) during an awards lunch Sept. 24. (Photo: Ian Jackson)

(Edmonton) A white shirt smuggled from his own closet was presented to University of Alberta chancellor emeritus Eric Newell Sept. 24, as he was honoured for his contributions as a business leader to the Aboriginal community.

The button-down garment, which had been decorated with streamers of coloured ribbon (green and gold to represent the U of A, red to represent new beginnings), symbolized Newell’s dedication to advancement of Aboriginal Peoples throughout his career as a business executive with Syncrude and then as a humanitarian involved with educational initiatives, including at the U of A.

For his many years of advocating for advancement and educational opportunities of Aboriginal people, Newell has been named the 2012 recipient of the Award for Excellence in Aboriginal Relations by the Canadian Council for Aboriginal Business and award sponsor Sodexo Canada.

Newell is the second person ever to receive the award, which was first presented to former Canadian prime minister Paul Martin. The award will be given out in Vancouver Sept. 27.

During an awards lunch held at the Faculty Club attended by several members of the corporate and U of A communities, the ribbon shirt was presented with heartfelt thanks by Tracy Bear.

Bear was the first-ever recipient of a U of A scholarship created by Newell and his wife Kathy. Now busy earning a PhD at the U of A, Bear received the Dean’s Citation scholarship in 2005, and remembers what it meant to her, not only financially, but also as an Aboriginal student.

“The biggest gift for me was realizing there were people out there who cared. Eric knew that investing in post-secondary education for First Nations, Métis and Inuit people would enhance their participation in society,” Bear said.

Today, Bear and Newell both serve as special advisors to the provost at the U of A.

Newell’s commitment to recognizing, including and strengthening Aboriginal communities through entrepreneurship and education “has been nothing short of remarkable,” said Clint Davis, president and CEO of the Canadian Council for Aboriginal Business.

As president of Syncrude, Newell led the way in developing a “compassionate approach and being a good neighbour” to Aboriginal communities affected by oilsands development, Davis noted.

“Choosing from the many nominees was no easy task, but Eric Newell’s work in recognizing the need to involve the Aboriginal community in Canadian business exemplifies leadership in Aboriginal relations and sets the standard for other companies,” Dean Johnson, president of Sodexo Canada, said in a news release.

Newell’s focus on education has also been visionary and addresses a keen need as the Aboriginal population in Canada grows, Davis said.

Newell served on the University of Alberta Board of Governors from 1996 to 2002, the last four of those years as the chair. He then served as the university’s 18th chancellor from 2004 to 2008, and upon retiring from that post, he and his wife gave $1 million toward an Aboriginal Gathering Place to be built on campus. Fundraising is still underway.

The project remains close to his heart, Newell told his audience. “It is important to create a sense of place for our First Peoples on campus, a place of celebration. It creates a sense of hope, particularly among young Aboriginal people. They will know that post-secondary education should be a part of their dreams and aspirations.”

Newell also praised key U of A leaders, including provost Carl Amrhein, for kick-starting Aboriginal education projects on campus, among them the Aboriginal Teacher Education Program and the Council on Aboriginal Initiatives. There is an urgent need to meet a fast-rising demand for educating coming generations of Aboriginal youths, Newell said.

“It’s a great place to sort out really good initiatives and get things moving at a faster pace.”

Former U of A chancellor honoured for Aboriginal advocacy
Newsroom