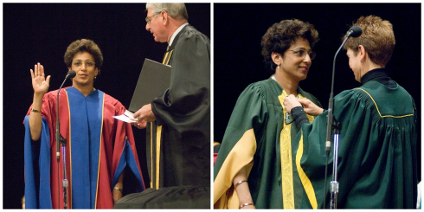 President Indira Samarasekera takes the oath of office during her installation ceremony Sept. 25, 2005, before donning the offical green and gold robe.

Two past presidents recall their speeches during a momentous occasion in the life of a university. 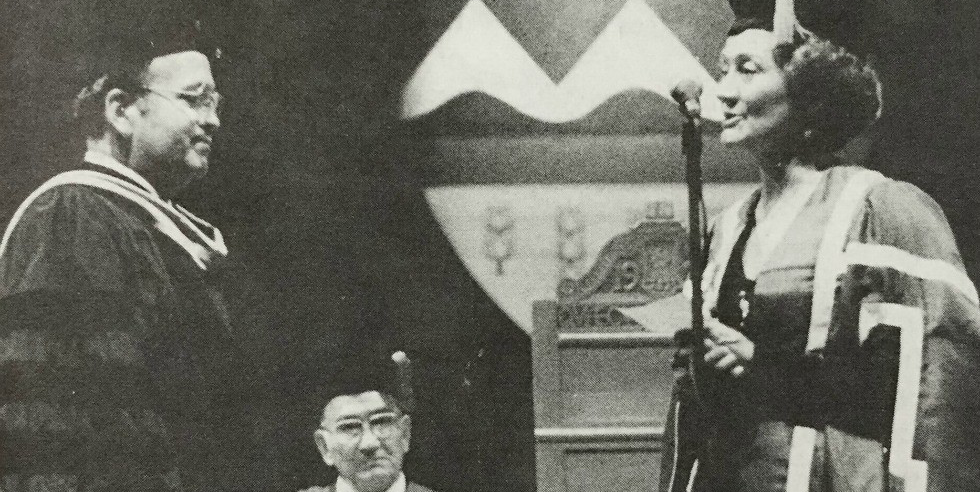 Myer Horowitz is installed as the University of Alberta's ninth president by Chancellor Jean Forest Sept. 13, 1979.

As the University of Alberta looks forward to the official installation of President David Turpin Nov. 16, we look back on a rare occasion in the university’s history through the eyes of two past presidents.

Former University of Alberta president and alumnus Myer Horowitz used to take some time to visit with a retired art instructor and education colleague who would spend bits of his golden years volunteering at the campus kindergarten helping kids with their art.

During one of those visits to the preschool, Horowitz, who served as U of A president from 1979 to 1989, overheard a child ask his friend how long it took him to complete the painting he was putting the finishing touches on.

The same could be said for Horowitz’s installation address.

“It takes a lifetime. The actual writing part, well, once you know what you want to say it doesn’t take all that long—a few months of research and writing down thoughts on scraps of paper—it’s just getting to that point.”

Although much of his installation address outlined his thoughts on where he saw the university and the responsibility as an institution for learning, teaching, discovering and serving, Horowitz says what he really wanted to accomplish was to introduce himself to the campus community.

“The main purpose was, even though a lot of people knew me because I filled other administrative positions at the U of A, to help people see what makes me tick both as a human being and as a professional, and provide some insight into how I would handle the presidency.”

Indira Samarasekera, U of A president from 2005 to 2015, says she found the spark for her installation address at a dean’s retreat in August before her installation. It was there that the collective view of the U of A was presented to her and the Dare to Discover vision began to formulate.

“An installation speech really communicates two things—one, of course, is your commitment to the institution and perhaps connection, as well as a bit of my own personal story.”

Samarasekera made it a priority to deepen the campus community’s connection to its storied past. She began reading up on the U of A’s founder and first president, Henry Marshall Tory.

“I wanted to know what he said in the early days and the excitement he felt for the U of A, and then connect that to my own sense of possibility.”

In writing her address, Samarasekera said, she also wanted something that spoke to the heart and mind, while sprinkling in some personal life experiences, including a meeting with one of the U of A’s great champions, former U of A chancellor and lieutenant governor of Alberta Lois Hole, who had passed away just months earlier.

“She was one of the most beloved chancellors, so I wanted to capture my meeting with her because of her hard work getting the government to invest in education.”

Samarasekera also took the opportunity to marry the fortunes of the university and the province.

As for any lasting effects of her speech, Samarasekera said she believed it helped shape her presidency.

“I think people were very much galvanized by the speech, and because of it, Dare to Discover was a lot easier to move forward,” she said. “I think the speech was a seminal point in terms of getting launched and getting momentum.”