Justice Russell Brown becomes the sixth person from the U of A community to ascend to Canada’s highest court. 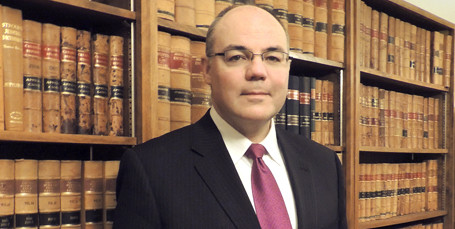 (Edmonton) Just 17 months after being appointed to the Alberta Court of Appeal, former University of Alberta law professor Hon. Justice Russell Brown has been named to the Supreme Court of Canada.

“It’s all anyone is talking about around here,” said Moin Yahya, vice-dean in the Faculty of Law and long-time colleague of Brown. “We’re all very proud of him.”

“He was always an outstanding teacher from the get-go,” said Yahya. “His students loved him, although it was understood that he was a tough professor. From the reaction of former students, they are all ecstatic that they know him and that he actually taught them.”

Despite a specialty in torts law, Brown was asked to teach property law when he arrived on campus in 2004. Along the way he would teach classes in civil procedure and eventually torts law, while picking up the Faculty of Law’s Tevie H. Miller Teaching Excellence Award in 2007, and the student-awarded Ron Hopp Q.C. Most Involved Professor Award in both 2006 and 2010.

His research interests lie generally within torts law—particularly recovery for pure economic loss and factual causation—and public authority liability for takings. Besides having his scholarship published in dozens of academic journals, Brown is also the author of Pure Economic Loss in the Canadian Law of Negligence (2011). Brown’s work in the law of takings was recognized by the Literati Network (UK)’s award for “outstanding paper” for 2010.

From 2011 to 2013, Brown acted as the associate dean (graduate studies) of the Faculty of Law, and during this time he was also a research fellow of the Health Law and Science Policy Group, which is now part of the Health Law Institute. He is a past chair of the Health Law Institute Board, a past member of the board for the Canadian Forum for Civil Justice, and has served as chair of both the University Appeals Board and the University Practice Review Board. He has also chaired or served on the executive of various subsections of the Canadian Bar Association, in addition to service on committees of the university’s General Faculties Council and the Law Society of Alberta.

“He was well-liked by students, well-liked by colleagues and that is what is going to make him a great judge—he is a fair guy, he’s a good guy and he is an open-minded guy,” said Yahya. “You would be hard-pressed to find someone to say something bad about him. He is fair and you can’t categorize him—he’s not liberal, he’s not conservative, he’s just a good judge.”

In addition to Brown, whose appointment to the Supreme Court of Canada is effective Aug. 31, the U of A has had a long history of faculty and alumni who have served on Canada’s highest court.

Justice Henry Grattan Nolan, BA ’14, was the U of A’s first alumnus to serve on the Supreme Court of Canada, which he did for only a year before passing away in 1957.

In 2000, Justice Beverly McLachlin, BA '65, MA & LLB '68, became the first female chief justice of the Supreme Court of Canada. McLachlin, who is still chief justice, was first elevated to the court in 1989.

Former U of A law professor and alumnus, Justice William Stevenson, BA ’56, LLB ’57, served two years on the court beginning in 1990.