Fort McMurray family all smiles after birth of baby girl 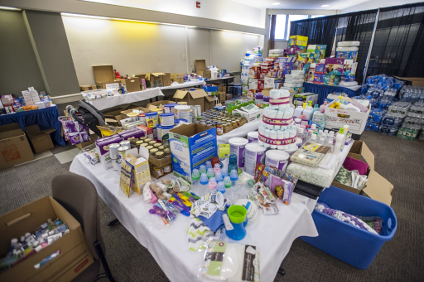 The supply-room "store" in Lister Centre has everything a growing baby needs, thanks to the generosity of donors.
“

We tried to give them as good of a new parent experience as they could have.

New parents grateful for the support they received from staff and volunteers at Lister Centre. 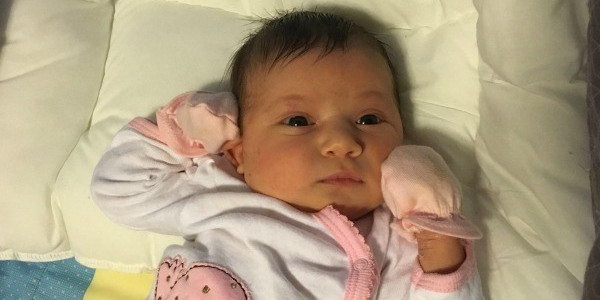 Welcome to the world: Baby Basma, whose name means "smile" in Arabic, was born May 25.

Naoufal Belmqeddem and his wife Soufia Tejjine haven’t had much to smile about since fleeing with their lives and little else through the heat and fire of Fort McMurray.

They do now, thanks to the birth of a healthy baby girl, Basma, whose name means “smile” in Arabic. Belmqeddem has been doing a lot of that lately—since May 25 at 10:18 a.m., to be precise.

“We are very happy,” he says. “I feel amazing, from what happened in Fort McMurray to the point of how we got here and had so many people helping us and trying to make us not feel bad. What’s happened makes me really proud that I’m in this country.”

It’s been a long journey for Belmqeddem and Tejjine, both of whom originally hail from Morocco but call Fort McMurray home.

Belmqeddem moved to the oilsands city five years ago for the prospect of a better life and better job. He worked as a truck operator for Syncrude, trying to save up enough money to afford a wedding. Tejjine joined him about a year and a half ago.

Building a life before the fire

They gradually built a life together, in a place far from their families. Tejjine took ESL courses at Keyano College and learned about her new home. Belmqeddem was laid off from work about a year ago thanks to an explosion at a Syncrude mine, but Tejjine found part-time work at a local grocery store. They made friends and prepared for the biggest change in their lives: their first child.

Tejjine was three weeks from her due date when the fires burning near Fort McMurray advanced on the city on May 3, prompting the mass exodus of 90,000 people.

“The day we evacuated, I woke up at home and saw smoke all over the place,” recalls Belmqeddem.

He waited three hours in line at a gas station before the couple fled their home in Timberlea. Theirs was among the last neighbourhoods evacuated and by the time they made the decision to drive south, the roads were gridlocked. It took five hours just to make it through the city, with flames on either side of the highway.

“It was like a movie that you wouldn’t believe,” Belmqeddem says. “You could feel the heat inside the vehicle. You couldn’t open the windows, couldn’t turn on the air conditioning.”

Soon Belmqeddem noticed Tejjine was having trouble breathing and appeared red in the face. He tried using calming words to reassure her everything would be OK, all the while hoping that would actually be the case.

The couple found temporary relief at a camp southwest of Anzac where they took refuge for the night before resuming their journey to Edmonton. They spent two nights in a hotel before learning from friends that some evacuees had found refuge at the University of Alberta and MacEwan University.

Home and refuge at Lister Centre

For the better part of the next three weeks, the family called Lister Centre home among more than 1,000 other Fort McMurray residents. From the outset, Belmqeddem says, U of A staff and volunteers and the Red Cross made them welcome, and not like evacuees. Having a bed, a private bathroom and free meals was a huge help, but having access to medical treatment for his wife and their baby-to-be truly helped the family settle in.

“We had very, very good support from everybody since we showed up here in Edmonton. It hasn’t felt like we left our home or suffered, because of the people that supported us and encouraged us every day.”

Lister volunteer Nancy Robinson has spent as many hours as possible working alongside her husband Frank, a professor in the Faculty of Agricultural, Life and Environmental Sciences and former dean of students, in the Lister Centre supply room, handing out donated goods such as bottled water, toothbrushes, underwear and diapers.

Robinson says she sympathized with the couple who, on top of the trauma of fleeing their home, were adjusting to life as new parents without the support of family. She did what she could to fill in, including making a special trip to a southside retailer to buy the couple a washing basin and a gift of clothing and books.

When the couple welcomed their new addition to the world, Robinson says she and other volunteers did their best to be as welcoming and supportive as possible. The staff and volunteers in Lister aren't just helping to manage a disaster, they’re managing people, she says.

“We tried to give them as good of a new parent experience as they could have. I don’t think it matches what they’d have experienced at home, but we went out of our way to help them find that excitement and joy.”

As much as the welcome they’ve received has been appreciated, shortly after bringing Basma home to Lister, Belmqeddem found the family a new place to live, securing a more spacious apartment downtown. He hopes to find work in Edmonton, ideally as a bus driver, and make the best of things for the next couple of months.

If he were single, Belmqeddem says, he’d go back to Fort McMurray right away to find work. But with a family, it’s too soon to know where they will rebuild their lives.

“All my life is changing really quick, but I just want to thank everybody, from the day we left to now and the future. They made our lives way better and way easier since we left Fort McMurray. Because of the support of the people here in Lister, the Red Cross, the people giving donations, businesses … It was huge support. It makes me really proud.”