The biggest impact of the natural disaster is loss of work, according to UAlberta research. 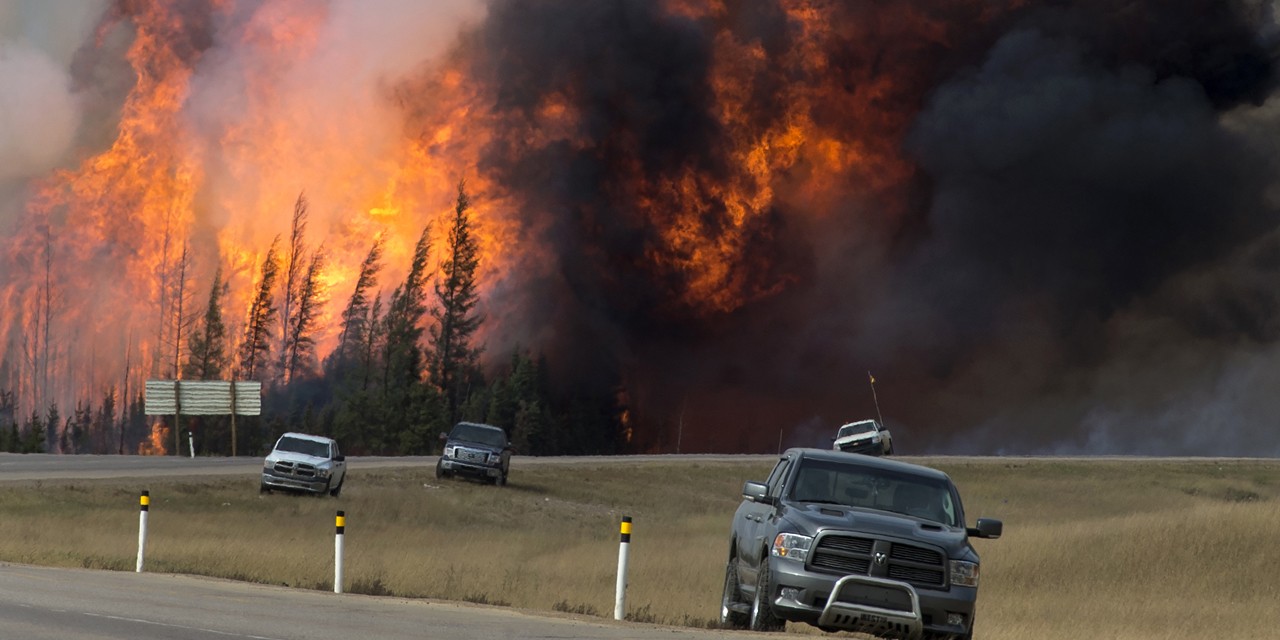 The Fort McMurray wildfires of 2016 brought untold levels of destruction and hardship, however a UAlberta study has found resiliency has risen out of the ashes. (Photo courtesy Government of Alberta via Flickr, Creative Commons)
A raging wildfire consumes the forest next to Highway 63 twenty four kilometres south of Fort McMurray Saturday, May 7, 2016. The "Beast", as it was called by Wood Buffalo fire chief Darby Allen, is a 1500 square kilometre inferno that has prompted the mass evacuation of nearly 90,000 people from the northern Alberta city. (photograph by Chris Schwarz/Government of Alberta)

There’s good reason to believe Fort McMurray workers are not experiencing major physical and mental health impacts one year after the fire, according to a UAlberta study.

“This is really an ‘Alberta Strong’ story. While there is some depression among these workers, it’s not mainly a result of the trauma of the evacuation or from losing their homes. It’s from lack of work,” said Nicola Cherry, a professor in U of A’s Department of Medicine and lead author of the study.

“An upturn in the local economy is probably the one factor most likely to support recovery.”

The study— the first to focus on the effects of the Fort Mac wildfire disaster on workers— surveyed 109 workers who were evacuated from Fort McMurray on May 3, 2016.

One in three reported having either a respiratory condition or a mental illness issue immediately post-fire, said Cherry, who is also an adjunct professor with the School of Public Health.

“However, a little more than three months later, most of those effects were gone. Only one in 10 reported a health condition they associated with the fire,” she added.

More than half of all participants reported financial loss from lack of work, and one in four had not held paid work since the fire, according to the survey.

“While less than half had returned to Fort McMurray when we completed the survey, 90 per cent reported that they planned to do so,” said Cherry. “The message here is that while there are some who still have lingering mental health issues, the vast majority of workers just want to get back to work.”

Cherry said that the findings align with other disaster studies that show survivors eventually recover after the events, adding that these study findings cannot be generalized to all evacuees.

“People choosing to come to work in Fort McMurray are probably more resilient than most,” she said.

She also noted that, based on her findings, “one can hope that evacuees of the wildfires in British Columbia also won’t be adversely affected long-term.”

The study was published in the Canadian Medical Association Journal.

One of the two study’s cohorts was funded by the Canadian Institute for Health Research. Both cohorts were supported with funding from the OHS Futures program of the Alberta government.